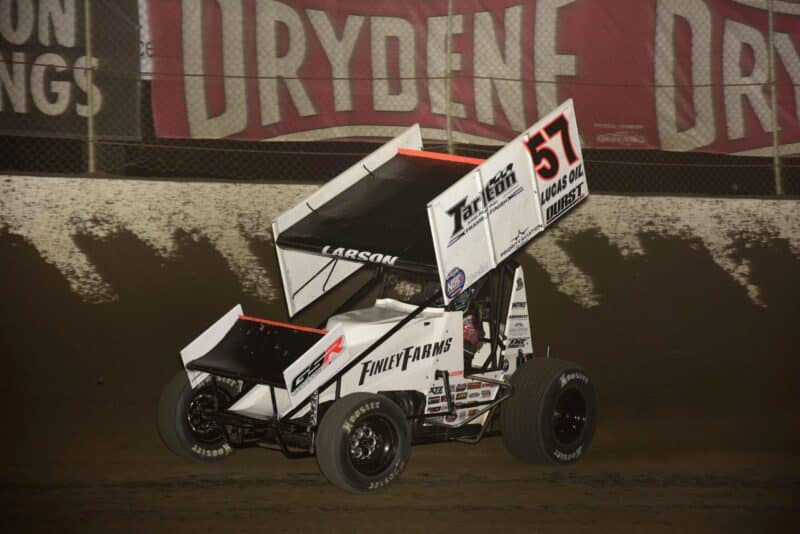 The King’s Royal(s), the two highest-paying World of Outlaws events of the season were won by Tyler Courtney and Kyle Larson… two points leaders in other series.

Saturday’s afternoon feature saw Tyler Courtney’s rocket start wiped out when Kerry Madsen got loose and spun in turn 4, triggering a three-car wreck that collected Cory Eliason and Giovanni Scelzi while forcing a total restart of the feature.

The first scored lap would instead to go to Brad Sweet, who bested Courtney in turn 2. Sweet led until lap 12, when lapped traffic allowed Courtney to momentarily catch up to the rear of the No. 49 car.

Lap 20 changed everything. With the yellow flying as top-10 running Logan Schuchart came up limp on the frontstretch, Lachlan McHugh and Brian Brown both ducked to pit road with flat tires. The next lap under caution, that same fate caught up to leader Sweet, who was forced to pit with a right-rear tire going flat.

Courtney led uncontested until lap 24, when Bristol WoO winner David Gravel caught up to the All-Star Circuit of Champions points leader for the race lead. Dealing with a track surface that had slicked over and was taking rubber, Gravel labored to keep up with Courtney, eventually settling in second with the lapped car of McHugh between the two leaders.

With five laps to go, Gravel got through the lapped cars and was able to mount two charges at Courtney in the closing circuits. Those charges fell short, and Courtney scored by far the biggest win of his winged sprint car career.

Saturday night’s rescheduled feature from 2020 saw Sweet again find trouble, spinning himself out on lap 2 after contact with teammate James McFadden, who scraped the turn 2 wall and got of shape. With Sweet relegated to the back of the top 10, Courtney would lead the opening 12 laps before McFadden rebounded and took the point. The two would swap the lead back and forth until lap 20, when Kyle Larson threaded the needle between the both of them exiting turn 2 and took the lead.

What was a hailstorm of slide jobs between those top-three cars ended on lap 23, when the yellow flag flew when Schuchart slowed on the backstretch. On the ensuing restart, Larson rocketed away from the field while Courtney, Sheldon Haudenschild and Carson Macedo all duked it out for spots two through four. Haudenschild would eventually take second and made several charges at Larson in the closing laps, but the desperation slider he threw at Larson coming to the checkers in turn 4 came up well short.

. @dirtvision REPLAY: @KyleLarsonRacin holds on to take the win and become King Kyle the 37th at @EldoraSpeedway! #KingsRoyal pic.twitter.com/zZscAltuUO

Larson’s win, which was wildly popular based off the crowd’s reaction, came in a rebuilt No. 57 car that went upside down in the last-chance qualifier for the afternoon’s feature race, and marked his first Royal victory in his first career start in the crown jewel event.

How it started / How it ended at the #KingsRoyal pic.twitter.com/3z4QHFTYcX

There’s no getting around it, the story of the day came in the form of non-WoO regulars stealing the show. In the afternoon feature, the podium finishers consisted of All-Star Circuit of Champions points leader Courtney, Pennsylvania Posse regular Danny Dietrich and part-time competition Darryn Pittman. Fast forward to the evening event, and NASCAR Cup Series points leader Larson proved untouchable once he got out front. The Outlaws have proven dominant in both their own events and across much of Pennsylvania in 2021, but they came up short at Eldora.

Speaking of Courtney, one of the most-talked about gambles of 2021 saw the Indianapolis-native opt to leave the comforts of wingless sprint cars for the 410 winged machines. Boy, is it paying off. Already leading the ASCoC points standings for much of the year, Courtney won the afternoon feature in his first career start in the crown jewel event. The way he’s running, it’s hard to believe he won’t be joining teammate Haudenschild on the WoO tour next season.

And as for Larson, well, Speed Sport’s Kyle McFadden summarized the climax of the weekend pretty well.

The victory lane scene at @EldoraSpeedway. @KyleLarsonRacin let’s it all go after a week he’s had.

18th at Atlanta after a speeding penalty, broke at Attica, mechanical issues Wednesday at Eldora, wrecked out of the B-Main earlier today.

Ends it with a Kings Royal crown. pic.twitter.com/71Nt7f5NKZ

Getting away from the top finishers, one of the more under-heralded success stories of the weekend was WoO rookie Brock Zearfoss. The Pennsylvanian has had a horrendous 2021, missing races with a concussion and wrecking more than half a dozen cars over the course of the spring. Having said that, to see Zearfoss successfully out-duel Eldora veteran Joey Saldana for the last transfer spot in the afternoon feature, then post fast time for the evening show and finish both features without incident was marked progress.

Knoxville Raceway regular Brian Brown might have pulled off the move of the day with a jaw-dropping thread the needle move to take the final transfer spot in the evening’s LCQ, but…

…Brown was not able to keep that spot, missing the evening feature. Coupled with an afternoon feature that saw Brown spin to miss the opening-lap melee, and arguably the fastest car in the field during Wednesday’s Joker’s Wild proved utterly irrelevant when the money was on the line.

Hard racing or not, the reality is Kerry Madsen triggered two multi-car incidents on the day. Spinning out on turn 4 exit during the first lap of the afternoon feature, Madsen triggered a pile-up that collected both Eliason and Scelzi. Then, in the final heat race of the evening feature, Kerry got involved with brother Ian Madsen in the most spectacular wreck Eldora saw all week.

. @dirtvision REPLAY: The Brothers Madsen @IanMadsen and @kmr29 tangle and each go for wild rides in tonight's fifth @TeamDrydene Heat Race. Thankfully, both drivers are okay and walked away. pic.twitter.com/CMiRKNJgCN

Experience proved to do nothing for Saldana, who after missing the afternoon feature after losing his battle with Zearfoss ended up wrecked after getting caught in no man’s land between a Courtney slider and a thread-the-needle move on Eliason in turn 4.

There is no way around it, Eldora proved absolute kryptonite for Kasey Kahne Racing. Part of the only heat race that got run on Thursday before rain washed out the program, McFadden and his crew were forced to turn their hotel into a de facto race shop to rebuild the No. 9 before Saturday.

And while McFadden climbed from last to third in the afternoon C-main, contact with Larson immediately after his turn 1 flip in the LCQ meant McFadden missed the afternoon feature. McFadden ran far better in the evening feature, but faded down the stretch after hitting the wall in turn 4 on the lap 23 restart.

Then there’s WoO points leader Sweet. Sweet was undeniably fast and arguably had the car to beat in the afternoon, but a tire failure while leading cost the No. 49 a shot at the win.

Sweet was visibly angry in the way he drove in the evening as a result. And while that intensity scored a heat race win for the 2019 King’s Royal champion, over-aggression in the opening laps of the evening feature triggered a spin that mired Sweet at the back of the top 10 never to be a factor. The entirety of Saturday night (Sweet was penalized a row during his heat for jumping the initial start) was a rare example of Sweet’s composure being visibly off-kilter.

I’ve written on multiple occasions this year about the four-wide salute being overused at this level of dirt racing. Let’s clarify… this race is big enough for such a display.

I don’t care what David Gravel tweets, he has to be thrilled that he failed to run down Tyler Courtney for the afternoon feature win considering he was disqualified for being four pounds below minimum weight in post-race inspection.

If anyone wants to cry with me I'll be at the t-shirt trailer signing Autographs.

Prior to winning Saturday night’s feature, Larson’s three sprint car starts with HendrickCars.com decals on the machine resulted in a mechanical failure at Attica on Tuesday, a mechanical failure in his heat race at Eldora on Wednesday and a flip in the LCQ at Eldora Saturday afternoon. For a minute there I thought Rick had put a curse on his prized Cup points leader to get him out of a dirt car.

Kraig Kinser joined Jac Haudenschild in running a throwback paint scheme at Eldora this weekend. Totally appropriate for any driver with the last name Kinser, but damn if didn’t look just like Spencer Bayston’s car at speed.

Ford Motor Company had a bigwig present to play the role of “Sovereign,” essentially the King’s Royal equivalent of the Grand Marshal, owing to his role in getting Ford to return to engine development for sprint car racing. While Ford fans and motorsports fans alike should applaud the man for getting a car company that’s even turning the Mustang into a plug-in brand for soccer moms to get back in the business of making 900-horsepower engines for push-start race machines, it was pretty damn awkward watching a Ford executive put a crown on Kyle Larson’s head.

Just think, all the money Ford spent on building hand grenades to put in Donny Schatz’s sprint cars could have gone to putting Larson in a blue oval. As a proud Mustang and F-150 owner, I’d say we the Ford family took a collective L on this one.

For all the hype SRX got for packing the Fairgrounds Speedway in Nashville Saturday night, Eldora honestly did it better… for a points-paying race with no invitational gimmicks. Instead of spending oodles of money developing spec cars and marketing has-beens, all Eldora did was put that big money into the purse. Keep it simple. If you pay out, they will come…

Went for a little stroll during qualifying to soak in the atmosphere.

18 – inches of cushion when the green flag dropped for Saturday night’s feature.

58 – number of entries for Saturday night’s feature at Eldora.

Where it Rated (on a scale of one to six cans with one a stinker and a six-pack an instant classic): Sticking with the Eldora scale, we’ll give the weekend four-and-a-half Toilet Waters. Courtney and Larson winning are both good stories, and the middle section of the evening feature was the best racing the WoO has seen since the Rev back in the spring. Largely uneventful heat races across two programs, and the fact there were two programs, kind of dulled what was a superior evening program.

Up Next: The World of Outlaws start the coming “midweek” with a true hangover race, running a $10,000-to-win feature after the “Knight Before the King’s Royal” was rained out Friday. Tuesday night the late models strike back, with the first night of the I-80 Nationals going off in Nebraska for the Lucas Oil Late Model Dirt Series. Coverage can be found on DirtVision and MAVTV Plus respectively.

How about Kyle Larson !! Sponsorship too.

58 entries is a lot of 410 Sprint Cars, but they used to get over 60 entries years ago. Knoxville Nationals gets a 100+.
Some racers see Eldora for what it is, a potential big expense with little return. Stay at the home track and collect a grand.