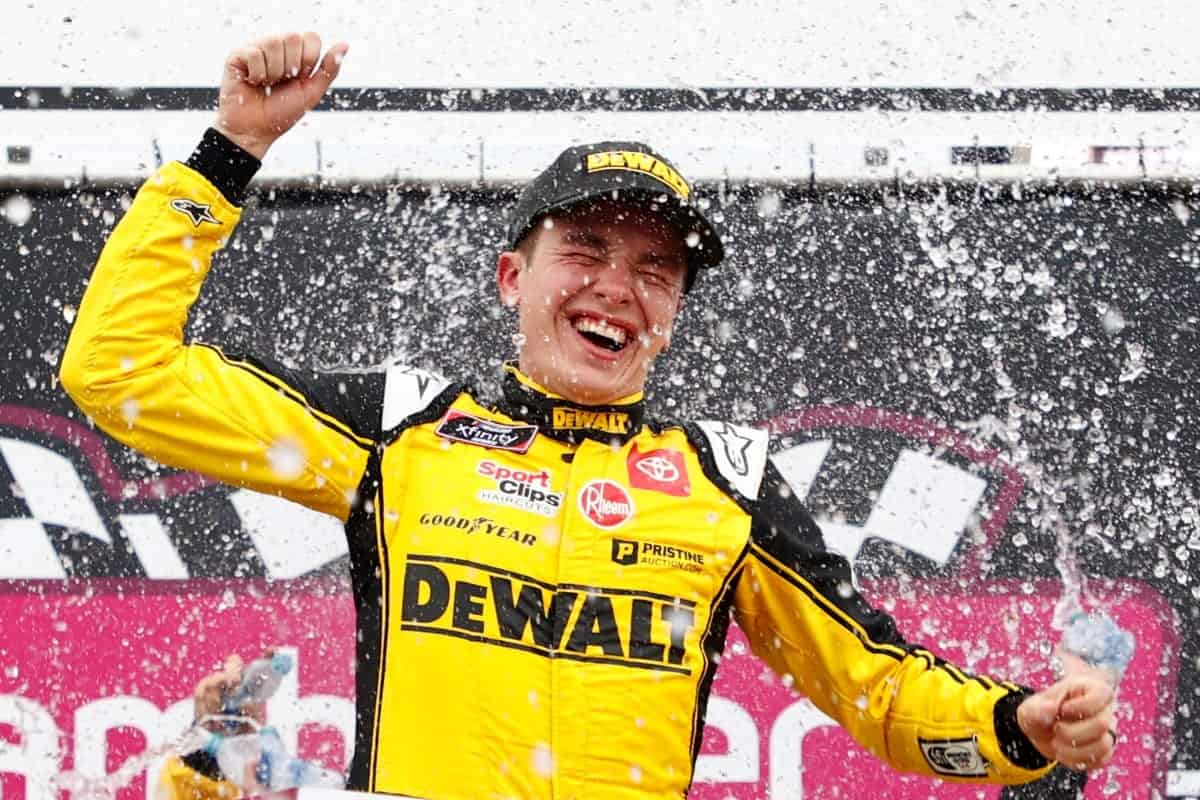 The NASCAR Xfinity Series did not race at New Hampshire Motor Speedway in 2020 as the race was realigned to its Speedway Motorsports sister-track, Kentucky Speedway, due to the COVID-19 pandemic. The shift meant that Christopher Bell would retain his Magic Mile crown for another year and when the green flag dropped in Saturday’s Ambetter Get Vaccinated 200, Bell made it known quickly that he was a threat to win.

Starting 14th, Bell had to work his way up through the field in his No. 54 Joe Gibbs Racing Toyota. Kaulig Racing driver Jeb Burton led the opening 16 laps before teammate AJ Allmendinger took control. In the closing laps of stage one, Bell worked over JGR teammate Harrison Burton before completing the pass with six laps to go in the first stage. Allmendinger worked hard to keep Bell behind him but to no avail. Bell was the leader when the caution was displayed on lap 44, one lap before the scheduled conclusion of stage one, and won the stage under caution one lap later.

Allmendinger was fending off Bell on the restart for the beginning of the second stage, but Bell was too strong. His Toyota rolled through the center of the corners far better than Allmendinger’s Chevrolet, who battled a rear grip issue for most of the race. Bell led lap 55 and would lead the remaining 145 laps to claim his third straight victory at New Hampshire (2018, 2019, and 2021).

If you were to say that Saturday’s 10th-place finish for Riley Herbst was a better performance than his fourth-place finish at Phoenix Raceway (March) or a sixth at Atlanta Motor Speedway (March), some may wonder why you would make such a statement. The Ambetter Get Vaccinated 200 was a race that Herbst and the No. 98 Stewart-Haas Racing team needed to capitalize on points more than ever. JR Motorsports driver Michael Annett was sidelined for a second straight week with a leg injury. Last week at Atlanta, the team left in a worse points situation than when the race started when compared to the playoff cutline.

Herbst started 12th, and by the time the competition caution was displayed, he held stable in 12th. Coming to the green flag to resume stage one, Herbst and several other drivers laid back to get a run coming to the restart zone. The leaders had not gone, and Herbst was forced to get off the gas but was rear-ended by Brandon Jones. Herbst spun into the inside wall, with his right front receiving minor damage. The incident could have mentally derailed his day because of the pressure to make up ground on the absent Annett in the points standings.

Instead, a monstrous rally was performed by Herbst, who retained his lead lap position and restarted 36th on lap 31. Herbst meticulously pointed his Ford through the field. He finished stage one in 24th and 14th in stage two. Ryan Sieg was the next obstacle as he and Herbst battled for the 13th lap after lap. Herbst eventually won the battle and, after a quick pitstop during the final caution with 51 laps to go, broke into the top 10. Herbst fell back to 12th, but as the race closed in on 30 to go in the race, Herbst found himself back into the top 10, where he finished in 10th place. Herbst entered the race 54 points behind 12th place Jeremy Clements, but after his 10th place finish at New Hampshire, he now sits 32 points behind 12th place Michael Annett, who Clements passed in the points.

Through 19 races this season, it is only the sixth time Herbst has finished in the top 10, and often it has been not easy to gauge where the team is as a whole. Performances like Saturday in New Hampshire are the best way for Herbst and the No. 98 SHR team to grind their way into the playoffs.

Someone else who had a much-needed run was Myatt Snider. Snider found speed in the second half of the race and, just a few laps following the final restart with 45 laps to go, was comfortably inside the top 10. Three weeks ago, he finished 10th at Pocono Raceway, Snider’s first top 10 since Talladega Superspeedway back in April. Despite the victory at Homestead-Miami Speedway in February, Snider and his Richard Childress Racing team have struggled for results, especially in the past three months. He finished seventh, and like Herbst, New Hampshire could be a springboard for a late regular-season push into the playoffs for Snider.

Teams were only given four sets of tires for Saturday’s race, and one of the sets was the tires that started the race, meaning only three new sets were left to teams for pit stops. The limited number of tires made the race utterly predictable as the base strategy would be to change them at the end of stage one, stage two, and again one more time during the third and final stage. Brandon Brown’s team was one of the few to go off this strategy when they pitted during the competition caution on lap 21 and put a fresh set of tires on. Brown’s team didn’t pit again until the end of stage two after lap 90. He hung onto a top 10 running position for a while but ultimately finished 12th in stage two.

Two hundred miles is a short race by oval standards for the Xfinity Series, but allotting teams a fifth set of tires opens the door for more strategy. For top teams or those in comfortable points positions, going off the baseline strategy was never an option, and that dulled the race a bit. Allocating teams four sets of fresh tires compared to five is a cost savings move but at the detriment to the strategy and entertainment of the race. Another race that will be 200 miles in length will be the season finale race at Phoenix Raceway. That race will need to have five sets of tires for teams, not four.

Brandon Jones was not as fortunate as Riley Herbst in the wreck the pair were involved in on the lap 26 restart. Jones was the car the punted Herbst to the inside wall. Herbst rallied and continued, but Jones suffered radiator damage that eventually led him to go behind the wall for an oil leak. He returned to the track but ultimately parked the car early, earning a 38th-place finish. It is Jones’ third straight finsh worse than 15th (Road America 19th, Atlanta 39th).

Kyle Weatherman’s crash caused by a mechanical failure at the end of last week’s race at Atlanta Motor Speedway was a horrible way to end what was shaping to be his first top-20 finish since finishing 16th at the Daytona International Speedway road course in February. That top-20 finish came this week at New Hampshire, but not before he tangled with Tommy Joe Martins on lap 44. The pair washed up the track in turn 1 when Weatherman was on the inside of Martins. Martins took the brunt of the damage to his right rear. Weatherman suffered minimal damage, really only needing a fresh set of tires. He remained inside the top 20 for most of the race and finished the race two laps down in 19th.

Saturday was Bell’s first start in the Xfinity Series since the 2019 season finale race at Homestead, and he didn’t seem to have lost a step in the over a year and a half long absence from the series. New Hampshire has been a great track to Bell. In three starts, he has three wins, and has led 430 of 600 laps. He becomes the second driver to win three consecutive Xfinity races at NHMS, with Kyle Busch being the first (2009-11). The win continues the Joe Gibbs Racing dominance at New Hampshire Motor Speedway in the Xfinity Series. The organization has now won 11 of the last 13, dating back to Tony Stewart’s victory in 2008.

“What I’ve got figured out is that I have really, really fast race cars to drive.” – Christopher Bell

This year’s Xfinity Series race at New Hampshire Motor Speedway won’t be remembered as one of the top races of the 2021 season, but it may very well be a Nashville Superspeedway-type lesson. The PJ1 traction compound was not applied before the race as the NASCAR Whelen Modified Tour raced before the Xfinity Series. It was unknown how the modifieds would react to the traction compound and, therefore, was planned to be applied after the Xfinity race. With no traction compound, drivers had to demonstrate patience and perseverance to pass the car ahead. Christopher Bell may have been the only car at New Hampshire with the ability to pass and defend with relative ease.

Many battles with evenly matched equipment took upwards of 10 and 15 laps for the attacking car to complete a pass on the car in front. NASCAR decided not to apply the PJ1 traction compound before Sunday’s Cup Series race due to weather uncertainty. New Hampshire’s track management, Speedway Motorsports, and NASCAR all should view this as a blessing. They can compare recent races with the traction compound with this weekend’s races without it. Once the comparisons are complete, the three groups can reconvene whether New Hampshire needs traction enhancements in the future. If it’s determined that one is required, the resin used at Nashville Superspeedway needs to be an option for the 2022 race weekend.

The two-week summer break for the three national divisions of NASCAR are the final off weekends for the NASCAR Xfinity Series in 2021. The field will return to action at New York’s Watkins Glen International on Saturday, August 7. The race will go green at 4:00 p.m. ET on CNBC and MRN, where Cindric will look to make it a fifth win in the previous six races for car owner Roger Penske. This race will kick off 14 straight weeks of high-speed Xfinity racing to the championship event at Phoenix Raceway on Saturday, November 6.