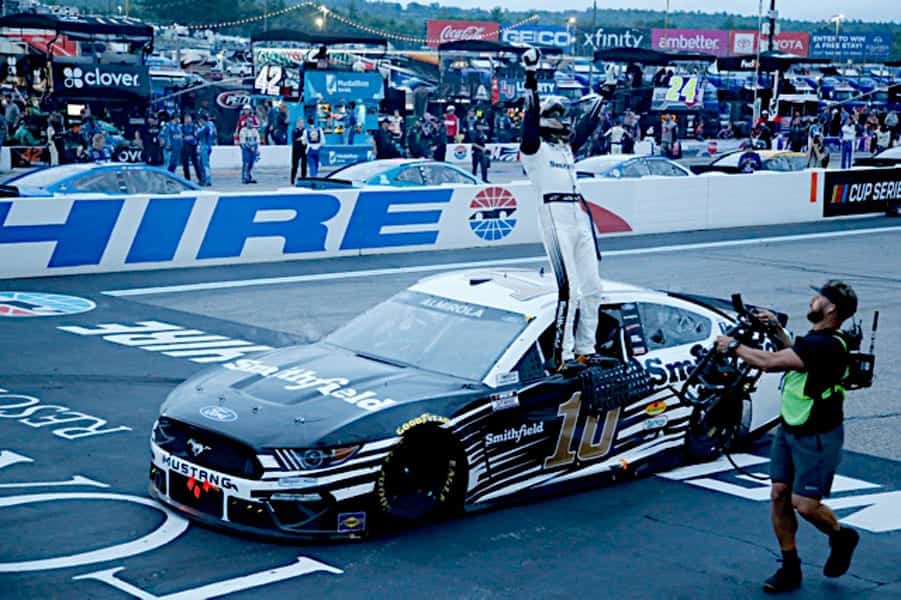 1. Has there ever been as clutch a win as the one Aric Almirola just pulled off?

Ever since Kyle Larson started getting on a roll, the dream of NASCAR Cup Series playoff intrigue has been just about dead. Then this past Sunday (July 18), Aric Almirola decided to give it the racing equivalent of a defibrillator jolt.

Up until the Cup cars rolled into New Hampshire, Almirola’s 2021 season had been, to put it bluntly, dismal. As recently as 2020, Almirola and the No. 10 team had managed to rack up five straight top-five finishes, but he entered Loudon with only one such result this year (at Nashville) plus a lowly one additional top-10 finish (at Richmond). Playoffs? Please cue the famous Jim Mora video for the proper way to scoff at the idea.

Add in the fact that Almirola had never won a race anywhere other than the crapshoot-by-nature superspeedways at Daytona and Talladega, and then top it with the sobering truth that Stewart-Haas Racing was 0-for-2021 as an organization, and Almirola was arguably one of the least likely drivers capable of pulling off a surprise.

So of course, he won.

It’s a bit hyperbolic to call this a career-saving victory, as there have been no signs that Almirola’s seat has been in trouble. His contract is thought to be up at the end of he current campaign, but he’s been a steady presence for SHR and has a great relationship with sponsor Smithfield, which is more valuable than Bitcoin these days.

But as clutch race wins go, this one was right up there with any in the playoff era. Barring something totally insane like four first-time winners in the next four races, Almirola will be in the postseason field. Stewart-Haas doesn’t have to worry about answering any more questions like, “Hey, are you guys planning on winning any races this year?” And it made the bottom of the playoff standings interesting again, with the final spot, at least for now, up for grabs between Richard Childress Racing teammates Tyler Reddick and Austin Dillon, who are separated by just five points.

That’s quite the positive impact from a single trip to victory lane. And who knows? With races still remaining at both of the 2.5-mile superspeedways, it’s possible we haven’t even heard the last of Almirola in 2021, even after it took him a while to get going.

2. Is it right to be suspicious of teams who “suddenly” find speed?

Speaking of Dillon, he seemed to be a little salty when discussing the situation he now finds himself in after New Hampshire:

Dillon added: "Obviously people can find speed at the snap of their fingers all of a sudden. It’s weird."

Does he have a point? We’ve already covered Almirola’s out of nowhere victory, but Fords in general had it pretty good at Loudon after not being much of a factor since April. Team Penske’s Brad Keselowski and Ryan Blaney did some intrasquad battling for the lead before ending up third and fifth, respectively, sandwiched around Joey Logano, who erased a multiple lap penalty to come home fourth. Kevin Harvick was right behind them. All of them finished ahead of Larson and the rest of the Hendrick Motorsports Chevys.

Still, one race is the ultimate small sample size, and with the exception of Almirola, those Fords have run better than Dillon most of the season. If someone else from below the cutline comes up with a win at, say, Michigan a month from now, maybe then we can talk about the Hendrick nose change rumor and any other conspiracy theories Dillon and other drivers want to put forward.

3. Where does Matt DiBenedetto go next?

Along with cheering the unexpected on-track success, Ford fans had plenty to talk about over the past week. Austin Cindric got a big promotion for 2022, when he’ll wheel the No. 2 for his rookie campaign. Roger Penske spilled more on the worst kept secret in the sport, suggesting that seat was open because Keselowski is off to Roush Fenway Racing to be a driver and owner.

That could have meant a reprieve for Matt DiBenedetto to stay in the No. 21 Wood Brothers Ford, but the other big news was that Harrison Burton is getting that ride next year. On one hand, DiBenedetto might consider it a blessing, as he described his current team as “broken,” but he also talked about being angry and bitter upon hearing he was being replaced.

The big question now is where he might end up. As our own Kevin Rutherford noted, DiBenedetto doesn’t seem fond of the idea of accepting a full-time Xfinity or Truck gig. He doesn’t have the sponsorship to elbow his way into a top team’s lineup, nor did he ever grab that breakthrough Cup Series win that would enhance his resume.

The truth is that the Cup Series silly season is like a high stakes game of musical chairs, with some drivers constantly circling and hoping they don’t end up with nowhere to sit down. DiBenedetto is easy to root for and could still avoid being left out in the cold, but it appears he’s going to be playing this game in the months to come, like it or not.

4. Is Denny Hamlin going to finish off the greatest winless season in history?

Somewhat incredibly, Denny Hamlin is still leading the Cup Series points standings despite not winning a race in 2021. He’s running out of chances in the regular season, but he’ll get some chances in the playoffs as well, probably at least two rounds barring a random disaster.

Let’s play this out to its logical extreme and say Hamlin manages not to win at all in 2021. Might he be able to author the greatest winless season ever?

Probably not. In 2014, winless Ryan Newman finished second to Kevin Harvick for the Cup Series title by a single point, due to his finishing second in the final race at Homestead. The caveat there is that as it turned out, Newman would have needed to pass Harvick and claim the victory, obviously no longer owning zero wins.

Of course just two years ago, Matt Crafton proved that it’s possible to snag a crown under the current NASCAR championship format without claiming any checkered flags along the way. To duplicate that feat in the Cup Series, Hamlin would have to make it to the Championship 4 and finish ahead of the other three contestants while someone outside the group of four takes the race win. Winning the bonus points for the regular season championship would help toward that goal, but let’s just say there’s a lot that would have to fall exactly right for Hamlin to make a run at some weird history.

5. Hey, there’s a break in the NASCAR schedule!

A week off is nothing unusual for the NASCAR Cup Series, which has a precious few built into every annual schedule. What never happens is back to back weekends off, which is exactly what’s about to take place — the next Cup Series race is Aug. 8 at Watkins Glen.

The impetus for this mini vacation is the Olympics, postponed from 2020 and forging ahead even under somewhat fraught circumstances as Japan is still grappling with the COVID-19 pandemic. NBC pays big money to air the Olympics, one of the few remaining events that guarantees large TV audiences (though we’ll see if that’s still true in this strange new era), so it was always likely that NASCAR would take a break for them.

SRX just concluded its inaugural season as well, so stock car racing is just going to be quiet for a bit. It’s a great time to watch some classic races or catch up on those projects around the house. Whatever you decide to do, enjoy it, because it’s pretty much pedal down until a champion is crowned once NASCAR returns.

He has been with 4 different teams in 7 years of Cup racing.
Is it him or the teams that are holding him back from winning?
He is a fan favorite but has no financing behind him. A win might cure that problem in the short term. He seems to come across moody at times when dealing with the public but then he really hasn’t had a lot of success to overcome that. Hope someone in Cup gives him one more chance but if he gets another chance he has to deliver. There are too many young up and coming drivers that can’t be ignored.

Look at the teams he’s been with, BK Racing,out of business. GoFas Racing, virtually gone. LFR out of business. Every time he’s changed teams he’s moved up and the teams performance improved. Don’t know why ha can’t get corporate sponsors. He’s very marketable. Hope he gets another good ride next year.

The 2020 Olympics are turning in to a disaster.

Think that given the virus situation that was inevitable. Still the audience will be far above that which nascar would have generated.

NASCAR has congratulated itself on coping with COVID, but it’s been done with smoke and mirrors. The Olympics and the MAJOR sports have had mandatory testing, while NASCAR has relied on the “honor system,” which is a joke. I can only give props to Jimmie Johnson and Austin Dillon for their honesty in self-reporting, perhaps unique in all of NASCAR.

In any case, if the Games go on, they will be a bigger draw than anything NASCAR could do to compete.

Matt has been in Cup for quite a while. The obvious trend these days are teen boys with millionaire daddies who can propel them into the big time. There’s no crying in NASCAR.

I don’t know about “finding speed,” but it has been reported that NASCAR has had HMS change the nose on their cars after finding that Chad Knaus was bending the rule book (again). They haven’t been as fast since then, with the result that Toyota and Ford have been making strides while HMS has been backing up.

That sounds like Smokey extending the front bumper to get more down force on the front. I don’t think NASCAR ever found it.