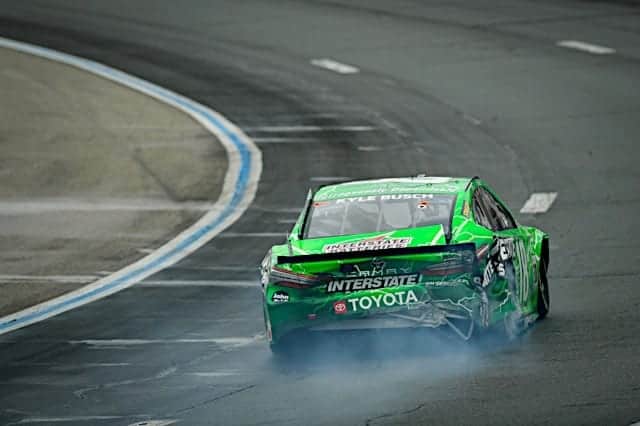 Miller began by addressing NASCAR’s decision to conclude the race eight laps ahead of schedule at the completion of lap 293 due to darkness. Teams were notified at the conclusion of stage two on lap 185 that NASCAR would race until conditions were deemed too dark to continue, at which time officials would issue a notice for 10 laps to go with no overtime attempts.

“I don’t think it got by any of us that it was getting dark,” Miller said. “We knew that by the time we got the facility dry enough to resume competition, we knew we were going to be up against darkness. Depending on cautions and the rest of that, we knew it would be close.”

To give a sense of the darkness as #NASCAR tries to complete this race at NHMS: pic.twitter.com/ezX24nhIV2

Indeed, it was. Christopher Bell was within a second of Almirola in the waning stages of the race, but due to NASCAR’s call to end the event early, the Daytona International Speedway road course winner had no choice but to settle for coming home runner-up. All he wanted was a chance to fight for the win.

See also
Up to Speed: Will Christopher Bell be Ready for the Playoffs?

“If the yellow flag comes out, then OK, call the race,” Bell said. “But eight laps? That’s what four minutes, right? What’s four minutes gonna do in the grand scheme of things? But I ran second, like I said, so I’m sure he [Almirola] was saying it was dark the old time.”

Miller noted several factors went into the call to cut the race short, including that race officials were beginning to have difficulties differentiating the vehicles on track.

“We rely on the communication from the teams and the spotters,” Miller said. “They were about half thumbs up and half thumbs down. We have tinted glass on the front of the [scoring] tower and it’s much harder for us to see out, so it actually started to become a little bit iffy for us even knowing which car was which. A lot of factors go into that one [decision].”

Surprisingly, Almirola didn’t seem too concerned with the darkness despite Bell closing in. Typically, leaders can’t wait for the race to end so their victory doesn’t spoil. But while he was thrilled to claim his first Cup Series victory since October 2018, Almirola didn’t feel like the situation was that dangerous.

“It honestly wasn’t that bad,” Almirola said. “There was enough light to keep racing. When I did my burnout, when I did my interview on the front straightaway, I could see everybody’s face in the grandstands and stuff. I guess it was definitely dusk, but it wasn’t dark.”

Perhaps that means NASCAR made the right decision. Better to conclude the race under safe conditions than go too far and wish the event was ended more safely sooner.

It could also have been a more cautious decision on NASCAR’s part following the events leading into the rain delay that paused action a mere eight laps into the contest.

While drivers reported mist on their windshields coming to the green flag, NASCAR moved forward and began the race as scheduled.

But on lap 6, race leader Kyle Busch and then-runner-up Martin Truex Jr. found themselves driving straight into a downpour in turn 1, eventually sliding and crashing into the outside wall. Busch’s car was damaged beyond repair while Truex managed to bounce back with a 12th-place finish. Their Joe Gibbs Racing teammate Denny Hamlin also spun but was unharmed.

Miller explained all normal protocols were followed but that those guidelines didn’t work well enough Sunday.

“We were consistent with how we’ve always handled that,” Miller said. “Again, we rely on driver communication through the scanners, spotters, all of our people out in the corners. It obviously didn’t work out today. We got caught out by kind of a quick sort of pop-up (shower) there in turn 1. The corner got wet really quick.

The damage to Kyle Busch’s car after starting on pole and crashing from the lead. #NASCAR pic.twitter.com/c5H9MkrqOB

“We can always look at being more conservative, but we did do and follow the same protocols that we always do under those circumstances.”

There is reason to be critical of NASCAR’s decisions in wet weather as of late.

Kevin Harvick was leading at Texas Motor Speedway last fall when rain in turn 2 wet the racing surface. Harvick slid wide into the outside wall and eventually missed advancing to the Championship 4 round of the playoffs.

In May at Circuit of the Americas, a road course where NASCAR can compete in wet conditions, heavy downpours and on-track spray led to massive collisions for Harvick and Bubba Wallace before a similar incident destroyed the vehicles of Truex and Cole Custer.

Each situation is unique due to circumstances, but forecasts all weekend indicated weather would be iffy at best. Perhaps NASCAR was too eager to complete 151 laps to reach halfway and deem Sunday’s race official.

To risk it that early questionable, even if the heavy rain appeared abruptly following a light mist.

It would seem that setting a time limit at the start of the race based on when the sun sets would be a way to avoid the appearance of favoritism. It can happen at the driver’s meeting.
TV and the fans want to see cars circle the track, even if they have to pull in immediately and come back tomorrow. Safety did NOT appear to be the biggest concern at Loudon.
Doing the best you can for ratings in advance of TV negotiations was the priority.
Scott Miller did a great job of going on air and fielding hard questions…the Jim France led team is such an improvement.

Shouldn’t have started the race at 3 pm instead of 1.

Bill B
Reply to  RCFX1

Yep.
How dare you apply a common sense solution to a problem. It’s NASCAR.

“so I’m sure he [Almirola] was saying it was dark the old time.”

“To risk it that early questionable,”