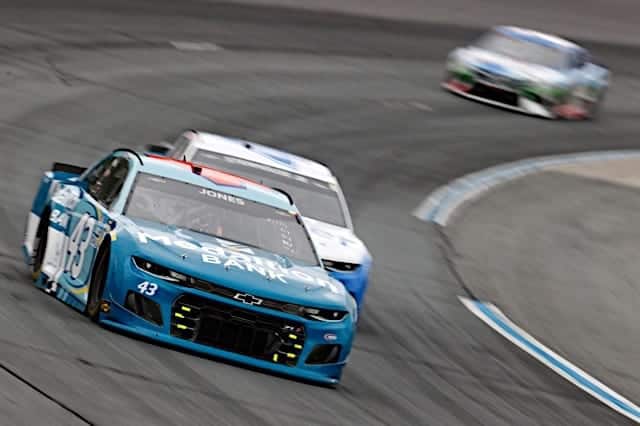 After the NASCAR Cup Series race Sunday (July 18) at New Hampshire Motor Speedway, only four races remain in the regular season. The Magic Mile presented a fairly comparable evaluation for title-contending teams to gauge their championship setup at Phoenix Raceway. For underdogs, it was another opportunity to go out and prove their worth as they grind through the summer stretch.

It is one of the most entertaining times of the year to be a NASCAR fan as well, and also perhaps quite nerve-wracking depending on who you are rooting for. Heading into the Foxwoods Resort Casino 301 in New England, the dark horses of NASCAR were either looking to gain momentum or perhaps pull off a playoff stunner.

Here is a driver who has not been immune to NASCAR Silly Season rumors for quite some time. After winning the 2019 Darlington Raceway Southern 500, stock in Erik Jones seemed to go up, though a winless 2020 put him in the hot seat at Joe Gibbs Racing. Jones wound up getting released from the ride after a few disappointing seasons.

A change of scenery could have been what the doctor ordered, but options were few. Jones ended up with Richard Petty Motorsports, a team that was no stranger to the spotlight after 2020. Unfortunately, the inconsistencies that Bubba Wallace once fumed over have plagued a driver looking to walk the same route Joey Logano once had to. Hopefully for Jones, this top-20 finish at New Hampshire will give the No. 43 RPM organization a boost heading into the homestretch.

Jones’ 25th-place points position has not been the focus as of late. His name is slowly being thrown around in the silly season pool as RPM holds a team option on him for 2022. And, at only 25 years old, Jones has no reason to give up. Nothing flashy or jaw-dropping has come from the No. 43 team yet, but Jones holds undeniable talent.

After a bizarre start that included a long rain delay, Jones got into the top 15 at one point at NHMS after using some strategy. The Byron, Mich. native hung around 20th most of the race, with stage results of 18th and 25th. When the checkered flag flew over a quickly darkening track, Jones crossed the line in 19th.

“It was an up and down day for our No. 43 Medallion Bank Chevrolet Camaro ZL1 1LE,” Jones said after the race. “It was a good fight that resulted in a top-20 finish for our Richard Petty Motorsports team. I think we learned some good stuff that we can take to the other low-downforce tracks, and hopefully, have got the momentum rolling back in the right direction.”

The result marks Jones’ second 19th-place finish in the past three races. That is now 14 top-20 results for Jones this season, including two top-10 runs. A playoff spot seems like a long shot, but crazy things have happened in 2021.

While Michigan International Speedway and the Indianapolis Motor Speedway road course do not seem like great opportunities, two other tracks could produce a playoff stunner. In three starts at Watkins Glen (the next race), Jones has three career top 10s and two top fives. And, of course, there is the regular season finale at Daytona International Speedway which is always unpredictable. Jones was strong in the mix with JGR a year ago in a similar scenario before a late crash derailed his hopes.

No matter what happens, two things can happen for Jones this year. He can build some consistency and gain exposure for potential sponsors on Richard Petty’s famous No. 43, or he can still put stock in his name for a future ride. Not much has been said on the subject, although Jones did tell Frontstretch in June that he is “focused on RPM right now.”

With 23XI Racing and Trackhouse Racing both looking to expand, it could be a landing spot for the 2017 Rookie of the Year. Dropping down to the NASCAR Xfinity Series in top equipment would not be a bad decision, either. But, as many drivers have pointed out, the Next Gen car could level the playing field that benefits RPM. Only time will tell for Jones’ career as it’s about to endure another twist to the story.

Just a couple of weeks ago, it was looking as if a reinvigorated Daniel Suarez could be a playoff spoiler, sitting less than 50 points off the cutline after the second race of the Pocono doubleheader.

A few weeks later, surprise winners and bad luck have Suarez facing a must-win scenario. Following five straight finishes of 15th or better, Suarez left Road America and Atlanta with a pair of 36th-place finishes due to a mechanical failure and crash not of his making. Suarez did not have an easy day at New Hampshire, either. In stage two, he was hit from behind by Wallace. Suarez held control and didn’t suffer detrimental damage, but it was a scare to a solid day.

A 20th-place finish was not what Suarez and Trackhouse Racing were looking for, but I am sure they will take it in comparison to the last two races. Just like Jones, however, Suarez has shown potential to pull a stunner at a couple of upcoming tracks. His speed is better than RPM’s and in 2017, Suarez earned his first stage win en route to a third-place finish at Watkins Glen. The next year, he finished fourth at the road course. Do not count him out there.

While Ryan Preece was looking for a better result than his 22nd-place showing in New England, it was not a disappointing weekend. On Saturday (July 17), Preece earned a thrilling victory following a last lap pass after going from third to first to win the Whelen 100 in the NASCAR Whelen Modified Series race at New Hampshire.

“I’m from Berlin, Connecticut, born and raised, and I have my local tracks in Connecticut,” Preece said. ‘But when it comes to the big three (national touring series) and the Cup Series, this is the only track that’s two and a half hours away. … But this is New England. and all of us New Englanders, we’re kind of our own breed. It’s just really cool to win in front of them all.”

The skill on display shows just how talented Preece is behind the wheel of a race car. That comes just a few weeks after an impressive victory in his NASCAR Camping World Truck Series debut at Nashville Superspeedway. These results could prove valuable as Preece faces an uncertain future in the sport.

Meanwhile, Corey LaJoie continues to build on his consistency at Spire Motorsports. His 23rd-place run at Loudon is his fourth straight top-25 finish. Once again, the upcoming NextGen car could reward a team like Spire who accrues results like these. LaJoie got to have his own fun off the racetrack too. During the red flag for rain, LaJoie once again joined Wallace to throw a football with the fans.

For Wallace, it was an eventful day. It started out with the No. 23 McDonald’s Toyota having to start from the rear for unapproved adjustments instead of his 18th-place starting spot. On lap 32, Wallace made contact with fellow underdog Anthony Alfredo, causing Alfredo to spin into the inside wall and inflict heavy damage to his No. 38 Ford. As previously mentioned, Wallace made contact with Suarez and spun around, collecting Chris Buescher. Wallace attempted to drag out a green flag run in the latter stages of the race in hopes of a caution or call for darkness but was forced to pit. The drama of the day resulted in a 26th-place finish, a disappointing result after a solid top 15 at Atlanta.

While Quin Houff came home in 35th, the reason for it is what puts him on the spot here. In stage two, Houff was entering turn 3 when Ryan Newman, turned him, sending the No. 00 into the wall and ending his day. It did appear as though Houff has upset the veteran previously. An unhappy Houff said on the radio, “Patch me up. I’ve got to get him.” In a now-deleted tweet, Houff wrote, “@roushfenway I have respect for equipment and those that work on the cars. I have lost respect for the driver. Look forward to hearing your announcement on Tuesday!”

Meanwhile, the NASCAR Xfinity Series playoff battle continues to heat up, especially with Michael Annett missing his second straight race. Following the series’ trip to New Hampshire, two underdogs sit in the heat of the battle. Jeremy Clements turned in a 15th-place performance, boosting him to a 50-point advantage over Riley Herbst. Clements currently sits in 11th in the standings. On the other side of the cut line, Brandon Brown sits 41 points below Annett following a 17th-place result. With tracks like Watkins Glen, Indianapolis road course, Daytona and Bristol remaining in the Xfinity Series regular season, the battle will only get thicker as the playoffs near.

Meanwhile, Brett Moffitt earned his second straight top 10, finishing in ninth. Moffitt shifted his points from the Truck Series to the Xfinity Series with more confidence he could win there. While a win is the only way he will make the playoffs, Moffitt has shown flashes of being able to pull off an upset and really shaking up the layout. Watch out for him at the road courses and Daytona.

While 23XI Racing and Trackhouse Racing get most of the attention out of the new teams, the newly established Live Fast Motorsports co-owned by BJ McLeod and Matt Tifft brought some heat on their No. 78 Ford this week. With sponsorship from Motorsports Games, the No. 78 flashed in red, white, and black this weekend.

Only 80 laps remain in the final stage @NHMS! If you aren’t already, tune in to NBCSN and watch the remainder of the action at the Magic Mile! #NASCAR | @MSportgames pic.twitter.com/RqLNLkl7cK

Grab the torch and run! The 2021 Tokyo Summer Olympics are set to kick off on Friday, July 23. With NBC covering the Olympics, NASCAR gets a two-week summer break for drivers to take vacations, get housework done, and test their athletic skills from the living room. All three series will return August 7-8 at Watkins Glen for a return to the Empire State after COVID-19 canceled the 2020 races there.

Not as good of a finish as we're shooting for but a step in the right direction towards the end of the race. Time to use these two off weeks to continue to build ?#Foxwoods301 | #RPMotorsports | #NASCAR pic.twitter.com/KzjPZdxRZ6

Not what we wanted, but we’ll build from it and be back in 2 weeks hungry for more. pic.twitter.com/HZDBMCIJX2

.@BubbaWallace spins and collects @Chris_Buescher in this Stage 2 spin at @NHMS. pic.twitter.com/ZKDEU2g3fA

A little spun pasta as @anthonyalfredo goes around on lap 32. ?#Foxwoods301 | @NHMS pic.twitter.com/j6GUbDMI99

ok have fun with that https://t.co/0YVoBKy8Iv