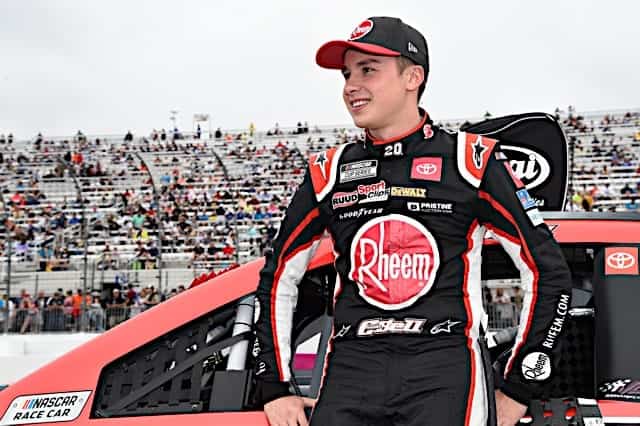 Christopher Bell’s 2021 NASCAR season got off to a great start.  In the Daytona 500, his first Cup Series race with Joe Gibbs Racing, he led 32 laps and looked like a potential winner before getting collected in a crash.

The following weekend’s race at the Daytona International Speedway road course had a much better ending for the No. 20 team.  Bell chased down Joey Logano in the closing laps and made a decisive pass for the lead with the white flag in sight.  It was an electrifying run to the checkers for the second-year driver.  It also gave him a big advantage in qualifying for the playoffs.

Several months later, the Daytona win is still the clear high point of Bell’s season.  He has earned an additional eight top 10s since the victory, including a second place at Road America.  However, the No. 20 team has been plagued by inconsistency.  For each of his top 10s, Bell has another finish of 20th or worse.

This past weekend at New Hampshire Motor Speedway was one of Bell’s best of 2021.  He jumped into the No. 54 car and drove to a dominant win in Saturday’s (July 17) NASCAR Xfinity Series race.  On Sunday, he was solid all evening, racing to a second-place finish.

It is no exaggeration to say that Bell was the best JGR driver in the field.  He got to carry the banner for the team early in the race after all three of his teammates spun out on a wet racetrack when NASCAR was too slow in throwing a caution.

Much later in the race, during the last green flag run, Bell was once again the only JGR Toyota in the top 10.  Kyle Busch crashed out of the race after his spin while Martin Truex Jr. fought a damaged car all race long.  Only Denny Hamlin was able to recover and join Bell near the front of the field.  But when Hamlin had to return to pit road during the final caution period, the victim of a loose wheel, it took him out of contention.

That left Bell to race for the win, and he almost pulled it off.  Over the last green flag run, the No. 20 came to life.  Bell passed Kevin Harvick, Ryan Blaney and Brad Keselowski, the three drivers who had led most of the race.  The only person whom Bell could not catch was Aric Almirola, who drove to a shocking upset victory.  Had NASCAR not shortened the race by eight laps due to impending darkness, Bell might have had an opportunity to catch Almirola.

“I didn’t know how many laps (NASCAR) cut it short,” Bell said.  “But definitely, whenever I saw the board and saw that we were eight laps short, it stings, man.  I feel like I probably had a little bit better pace than (Almirola), and was able to get to him.  I know lapped cars were giving him a bad time. But (if) I was able to get to him, it was gonna be a heck of a race.

“Everyone on this No. 20 group, we didn’t start out the greatest, and then we were really good, the best we were all day right there at the end of the race,” Bell said.  “So, that’s all you can ask for is to have a shot at it, and yeah, just wish we had eight more laps.”

It is easy for Bell to get lost in the shuffle among his teammates.  This season, Hamlin has the consistency.  Truex has the wins.  Busch has the momentum (or at least had the momentum until Sunday).  All three are likely going to be serious championship contenders, probably more so than the No. 20.

But Bell has a few advantages up his sleeve.  Much of the current No. 20 team includes personnel formerly on the No. 18, including crew chief Adam Stevens.  It’s a battle-tested group who won a championship with Busch in 2019.  Even if Bell does not have experience competing for titles in the Cup Series, his crew does.

Bell’s other big advantage is that he has had a lot of time to prepare for the playoffs.  Not only did Bell win very early in the season but he was the first JGR driver to go to victory lane.  Compare that to Almirola and Stewart-Haas Racing, who have struggled mightily in 2021 before winning on Sunday.  While Almirola’s victory may give the No. 10 team some short-term momentum, it seems hard to believe they can suddenly become title contenders after such a difficult season.

Bell, on the other hand, has had months to prepare.  His team has had the time to figure out what works for them and what does not.  And while Bell would probably like to have more playoff points, the postseason races will be his best chance to be competitive.  Note that the No. 20 car has not advanced beyond the first round of the playoffs since Matt Kenseth’s final season in 2017.  If Bell can get through Bristol Motor Speedway and stay in the game, it will already be a step forward for his team.

Advancing through the playoffs will require more days like Bell had at New Hampshire.  Not only did he avoid the mistakes that tripped up other contenders but, as Bell said himself, his car was fastest at the end of the race.  Putting complete races together with a new team can be one of the toughest things for a young driver to learn.  If Bell can take lessons from Sunday’s race into the playoffs, he will not be in the shadow of his teammates for very long.