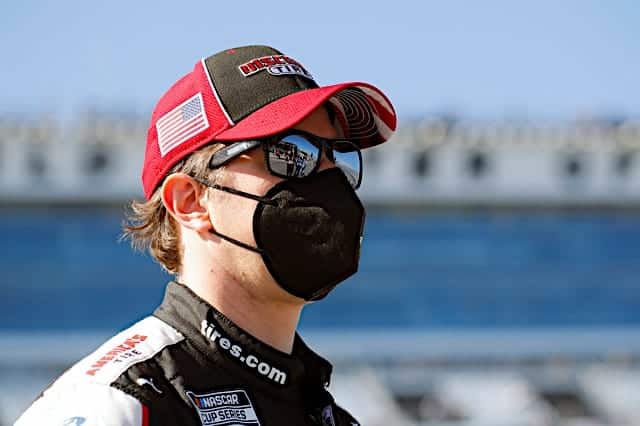 Did You Notice? … Brad Keselowski is the right person at the right time to buy into Roush Fenway Racing? Some 33 years after Jack Roush started his NASCAR program, a succession plan has been put into place in the form of the 2012 Cup Series champion.

Keselowski laid out his reasoning Tuesday (July 20) in front of a packed house at the NASCAR Hall of Fame in Charlotte, N.C. In figuring out his long-term future, the 37-year-old focused on four major details that mattered to him in making this move.

Let’s tackle them one by one, based on Keselowski’s own words.

1) To have a long-term driving contract.

Once upon a time, drivers a decade ago were given lucrative extensions, packed with all the years and money they’d ever want. Jeff Gordon was given a lifetime deal at Hendrick Motorsports while seven-time Cup champion Jimmie Johnson was given five years. As recently as 2017, Joey Logano was handed his own five-year extension with Team Penske.

That type of commitment just doesn’t happen anymore. Kyle Larson has torn up the competition this year with Hendrick. His reward? An extension … for two years (through 2023). Teammate Alex Bowman has also been successful, winning three times, but got just a two-year extension of his own.

Both drivers come with solid, full-time sponsorship for all 36 races. If they can’t leverage that, how could Keselowski, whose longtime backer Miller Lite (now other Molson Coors beer Keystone Light) has scaled back to the equivalent of a one-race deal? Sponsorship has quietly been patchwork at Penske on the No. 2 car, a variety of small puzzle pieces that haven’t sweetened the deal as their flagship driver got older.

In a sport that’s pay-to-play, the commitment level just wasn’t there for top-tier programs to commit to Keselowski 100% for the final five to six years of his driving career. We saw that last summer, when Penske offered him just a one-year extension despite leading the team with four wins.

2) To be in a leadership role … to express himself creatively and be able to lead the company and team to be the best it can be.

In a world where the Next Gen car is causing a major ownership shift, every organization is making moves within leadership. Hendrick solidified their support structure by hiring Jeff Gordon as Vice Chairman this summer. The move to promote Chad Knaus to Vice President of Competition during the offseason has paid major dividends. Those ultimately shut the door on any type of Keselowski return.

Joe Gibbs Racing has its own structure in place, family-owned with 80-year-old Joe Gibbs still very much involved in day-to-day operations. Son Coy is the Vice Chairman and COO, in position to one day take over the company. Across the way, Michael Jordan and Denny Hamlin seem to have the long-term Toyota expansion plans on lockdown with 23XI Racing. It’s a manufacturer that has always valued quality over quantity, a smaller group with limited leadership opportunities.

That leaves Ford, Keselowski’s manufacturer since Dodge left the sport after the 2012 season. Penske leadership has always been spoken for at the top with 84-year-old Roger. Team President Tim Cindric has been in place for years as the de facto successor, more connected than ever to the NASCAR side with son Austin as the reigning Xfinity Series champion.

Keselowski was very careful not to comment on private conversations with Penske. But it’s clear the leadership role he once played in 2010, helping rebuild the NASCAR operation upon his arrival was not going to be increased over time if he stayed.

“I think it was pretty well known,” was all Keselowski would say in response to a question about whether Penske understood what he wanted. “Ultimately, the ship has kind of sailed, but I want to express the gratitude I have more so than anything else for the opportunities he’s provided me to date and don’t want to leave with any other emotion besides that.”

That meant Keselowski needed to step down a level to find a company willing to welcome his leadership skills. Enter Roush Fenway Racing, whose program has steadily contracted from five Cup cars and a half-dozen Xfinity and Truck programs to just two Cup teams, period, neither one of which appears capable of making the playoffs.

At age 79, Roush has whittled down to Ryan Newman, an aging 40-something who’s won just once on the Cup level since 2013, as his primary driver. Chris Buescher is young (28) and a former NXS champion but only has one career Cup victory, a fluke in the rain at Pocono Raceway back in 2016.

Absorb that for a second as the lineup of a team whose ownership group includes NBA MVP LeBron James and the Boston Red Sox guru John Henry. To stay involved with this program over the long-term, it was clear they needed a driver capable of both on-track performance and off-track leadership to turn this ship around.

Keselowski’s the best man out there.

3) A percentage of ownership.

Again, that appeared to be a non-starter over at Penske. It’s important to note here Keselowski, in looking to take the next step, was inspired by what Tony Stewart accomplished with Gene Haas and Chevrolet over the past dozen years.

“I was looking through the stats and he had the same amount of wins and was the same age when he moved over to Gene Haas’ team,” Keselowski explained Tuesday. “That was probably more by coincidence than choice, but that clearly shows you can be successful with this type of arrangement.”

Keselowski is right on that. Stewart was also 37 years old when offered the opportunity to build Stewart-Haas Racing. He had 33 Cup wins (to Keselowski’s 35) and two Cup championships as opposed to Keselowski’s one.

The difference here is Keselowski gets an ownership stake in a program with a rich, storied history. RFR has won multiple Cup championships with Matt Kenseth (2003) and Kurt Busch (2004). They’ve won 137 Cup races, including two Daytona 500s, and made the NASCAR playoffs as recently as 2019.

The old Haas Racing team? Stewart inherited a program that posted a grand total of one top-five finish in seven years at the Cup level. They rifled through a dozen drivers that posted more DNFs (44) than top-10 finishes (14) in 284 starts with the team.

If Stewart could win a title with that group? Within three years of joining? Keselowski believes he can work wonders with RFR. His future teammate sure thinks so.

Really excited about the energy and championship mindset that @keselowski will bring to @roushfenway.

He and Jack are alike in that they're very passionate about representing our partners and Ford in the best way. Look forward to seeing where his knowledge can take our company! pic.twitter.com/xMW9gGCE6R

4) To have a role in the sport when done driving.

Keselowski wanted to go somewhere he’d be assured a position in the sport over the long-term. For its part, RFR President Steve Newmark indicated the team had every intention of staying involved in NASCAR for decades to come, only running into trouble in terms of ownership structure when they first contacted Brad at the end of 2020.

“We were coming up with five- and 10-year plans … but there was kind of a hole in our strategy going forward,” Newmark explained. “In that one of the things that we were looking for at Roush Fenway is a more solid succession plan.”

They have one now, Keselowski partnered with a company that has deep roots within the Ford system. Take the Roush-Yates engine program, currently the exclusive powerplant supplier for all Ford teams, and that power structure shows no sign of shifting after three-plus decades of sweat equity Roush has built partnering with Blue Ovals.

It’s an organization and manufacturer that form part of the sport’s foundation. If they’re not around, chances are the sport itself is in freefall. It’s the type of job security Keselowski wants while building the type of powerhouse, championship-contending operation he expects.

OK, now we’re off the reservation. But it’s true! As someone who once followed Keselowski for a year, doing a driver diary for SI, I can tell you he’s one of the deepest thinkers ever to grace the NASCAR circuit. You may not always agree with him on content, but the answer’s guaranteed to be well thought out and reveals an intellectual depth few have on the grid.

Keselowski also has some proven business acumen, starting up a successful manufacturing plant focused on 3-D printing and space technology. He understood the losing financial battle of running a NASCAR team in a lower series (in this case, Camping World Trucks) and closed the operation in order to build up his resources for a bigger swing at team ownership.

You know who else did that type of long-term planning? Who’s also a deep intellectual with SAT-level answers in media press conferences? Roush, who began Roush Industries years before delving into NASCAR. By the time he got here, the car owner was already successful in other forms of motorsport and had nothing left to prove. So why’d he do it?

“Because I thought I could,” Roush explained. “And I think the reason Brad is wanting to grab a hold of this tiger’s tail and whip it into shape is that he thinks he can, and I’m cheering for him because he’s got energy at his age that I expended at my age and we’re anxious to see what he can do with it going forward.”

Roush Fenway Racing is clearly better with Keselowski as owner. How much better? We’ll see come 2022. But the unknowns of the Next Gen car and the arrival of a Cup champion may accelerate the rebuilding process.

Good article. Brad will bring Roush a well needed shot of adrenaline and inspiration. Definitely think they can be another Stewart-Haas type sucess.

I respect Brad but this will be the last we see of him running up front for the foreseeable. Not enough resources over there. See recent : Erik Jones run up front in Gibbs equipment then we cant find him in the Petty ride.
Same will happen with Brad , sadly.

RFR has far more resources than RPM, plus with everyone starting from scratch with the next gen car, that puts them on more equal footing. I believe you’ll see different and better performing Roush cars in 22. Infusion of someone with Brad’s talent, experience, intellect and what he’s learned at Penske will pay off for RFR.

I don’t see Brad contributing much to RFR. It’s nice that he gets his dream of part ownership of a Cup team, but minority owner-drivers have contributed very little on the ownership side since the long-ago days of Alan Kulwicki. RFR will continue to be a second-tier team.