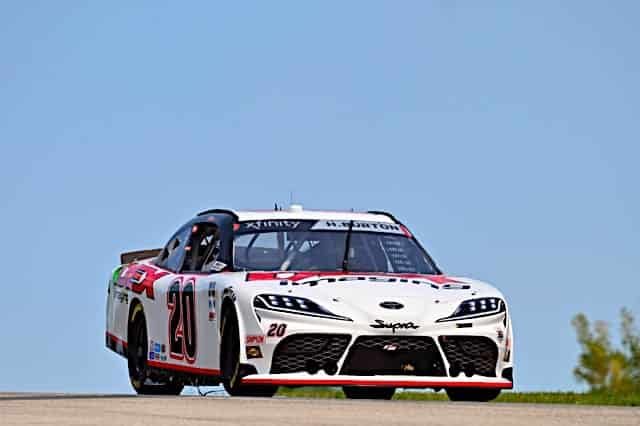 The expectations may be unfair. But racing can be an unfair business at times. That’s just the way it is at times.

As last year ended, Harrison Burton may not have been in the Championship 4 of the NASCAR Xfinity Series, but he carried the mantle of a heavy favorite into the offseason.

There was good reason for that. As 2020 ended, few drivers had the burst of momentum of Burton and the No. 20 team. He won twice in a row at Martinsville Speedway and Texas Motor Speedway, giving him four wins to go with triumphs at Homestead-Miami Speedway and Auto Club Speedway earlier in the season. Those four wins, by the way, were third-most of any driver in NASCAR’s No. 2 series

It’s one thing to win multiple races. It’s quite another to win at different types of tracks. Sure, Texas, Homestead and Fontana are all downforce tracks, but you still have to drive them differently. Even if you go back to Atlanta Motor Speedway, drivers would talk about how unique it is compared to other 1.5-mile quad ovals in Texas and Charlotte. When you combine those victories with the Martinsville win, it proved that Burton could be a versatile weapon and win races.

This year, however, Burton and victory lane have had a hard time finding each other, something that was expected by now for Burton and the No. 2o team by keen observers. Burton has not been bad. He is one of four drivers tied for fourth in top-10 finishes with 12 and his six top-five finishes put him in seventh in the series. Running well has not been a problem.

It’s all good enough to put Burton solidly in the top five in the points standings. But after finishing last year the way Burton did and come from the same organization that has touted the No. 54 car, you’d expect a win or two. But that, for various factors, has not come yet this year.

Having a new crew chief has not helped, with Ben Beshore having moved on to call the shots for Kyle Busch on the NASCAR Cup Series side. Jason Ratcliff, one of JGR’s most proven and versatile crew chiefs, has seen firsthand the up-and-down recent run for Burton.

As of late, it’s been feast or famine for the No. 20 car. In the past eight races, Burton has either finished inside the top five or outside the top 20. Of those outside the top 20, three of those four results were due to a crash. A pair of top fives in the past three races at Road America and New Hampshire give Burton much-needed momentum, but that’s not the only reason to buy stock in Burton right now.

For one, the more a driver logs time with a crew chief and runs well, the better chance there is to have everything fall into place when it matters most in the closing laps. That’s definitely where Burton and Ratcliff are trending, now.

But it goes beyond that.

A cloud of uncertainty, possibly pent up, vaporized last week with the announcement that Burton has an opportunity in a quality ride on NASCAR’s top level as he’ll take over the No. 21 for the Wood Brothers next season, something any driver in a lower series would dream of.

If there was ever a monkey being lifted off of one’s back, this is it.

“Now, I get to go enjoy racing in the Xfinity Series with my Xfinity Series team,” Burton said. “It was awesome just to focus on Xfinity racing and forget about everything else.”

That should do nothing but help Burton and the No. 20 team cement the first win of the season, something that should be expected at this point.

For an Xfinity team out of the JGR shop, that’s how it should be.

Super excited for this opportunity ahead! It’s really a childhood dream coming true and I’m ready to go to work and make the most of it! #SomethingToProve https://t.co/7LF41celUc