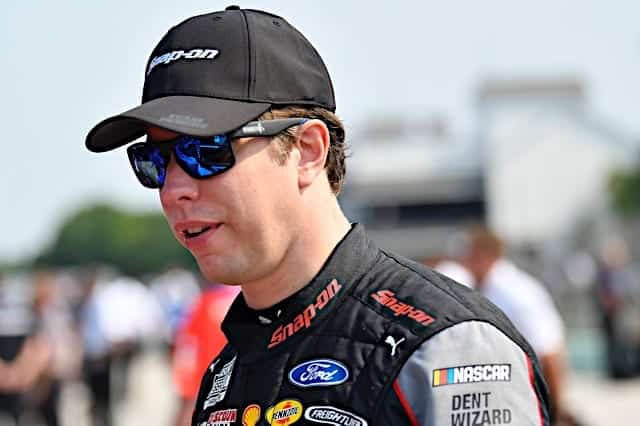 Brad Keselowski was pretty confident during his press conference announcing his ownership stake in Roush Fenway Racing. How long will it take for him to turn the organization around? – Jill M., Milwaukee, Wis.

It ain’t gonna happen overnight, I can tell you that much.

Roush Fenway Racing has been a mediocre team at best the last couple years. Only one playoff appearance from Ryan Newman in that time, and it was a first-round exit without much fanfare to boot. Keselowski has made the playoffs in every season since 2014 and was one spot shy of a championship last year.

This specific move can be looked at as a short-term loss for a long-term gain. In terms of performance on track and personal life off of it, he hopes.

Keselowski has an impeccable track record, though. Jack Roush talked gushingly about KAM (Keselowski Advanced Manufacturing, his company that has the goal to “spearhead a modern-day industrial revolution by developing innovative, advanced manufacturing solutions” and was started a few years ago), as well as his now-defunct Camping World Truck Series team, Brad Keselowski Racing, which will have a total of five of its alum racing in the Cup Series when next season begins.

I’m sure those drivers (Tyler Reddick, Austin Cindric, Ross Chastain, Chase Briscoe and Ryan Blaney) would agree with Roush that it seems everything Keselowski touches turns to gold. And the folks at RFR are hoping he does the same with this new venture.

Keselowski points out an interesting stat about Tony Stewart: "He had the same amount of wins and was the same age" when pointing to Tony Stewart as the model. Adds that's probably just a coincidence.

"I feel like I'm buying into a stock as it's about to go up."

Three to four years sounds like a fair timeline to turn a 15th-20th place team into a winning organization weekly, right? That includes two full years of the NextGen car, all teams in the same boat in terms of experience with the vehicle and Keselowski getting acclimated to RFR from Team Penske. Sure, they’re both Fords, but the minutiae and day-to-day operations of the organizations are extremely different.

If Keselowski is able to qualify for the playoffs next season, I’d have to consider that a success. Chris Buescher is hovering around the cutline right now, and you figure with NextGen evening the playing field (theoretically) a little and Keselowski’s talent, the No. 6 next year could be among the sport’s best 16.

But playoffs are not the goal for Keselowski.

? "I feel like we can be the best #NASCAR team. And our goal is no less than that." – @keselowski

The goal is an achievable one. Heck, RFR once was the best team. But they aren’t now and they won’t be next year. The work is just beginning for Keselowski, but as he said in his press conference, he’s ready for it.

“I’ve been studying my whole life to be ready for this moment. And I’m ready for the test.”

Should multiple weeks off during the season become a thing? I miss my NASCAR already. – Brooke F., Atlanta, Ga.

Oh, Brooke. You know how I feel about this by now.

Less is more, people! I’m a big proponent of shortening the races and shortening the season. All in an attempt to starve the fanbase’s appetite for racing. 36 races is too many. 500 miles at Texas Motor Speedway/Atlanta Motor Speedway is too long. A schedule stretching from February to November is too long. Only one or two off weeks throughout a 10-month schedule is too few.

These teams work hard and deserve time off, if they so choose to take it. The nature of the beast that is NASCAR Cup Series racing is that even with an “off” week, teams are still working. Take this two-week break for the Tokyo Olympics, for example. Next Gen chassis are starting to be delivered to teams. You really think after all this waiting they’re gonna just let them sit on the shop floor? No way.

I’d be in favor of instituting something similar to Formula 1’s summer break (with a twist): a tw0-week off break in the middle of the summer with one of those weeks being a “mandatory” off week. No visiting the shops, no working on setups, no simulation work, nothing. Racers are inherently going to race, so I’m sure you’d see Kyle Larson win on dirt somewhere, Chase Elliott run a late model somewhere, etc.

It might be a pipe dream, but if SRX and NASCAR were to ever work together for promotional and scheduling purposes, NASCAR’s two-week break could pave the way for a SRX showcase on short track Saturday night’s in the middle of the summer.

And I know what you’re probably thinking right now. “But Davey, you want a shorter season. You’re getting rid of two weeks right there! You can’t have it both ways.”

Well, actually, I can. Pocono Raceway doubleheader: check. Have a doubleheader somewhere else (Richmond Raceway, Atlanta, Homestead-Miami Speedway, etc): check. Cut one race off the schedule: check. Give the people a product they crave, not a product they pick apart because there’s an overabundance of it.

As I said, less is more.

As much as I love racing, fast cars, and NASCAR I agree with you. The season is too long, I’d be in favor of 30 race weekends, plus the All-Star race and Busch Clash. Also agree that the races are too long. Increased reliability due to increases in development and restrictions to keep racing close and speed down have created stage racing which just emphasizes the excessive length. The races were originally a contest of durability as well as speed. I would to love see stages go away, replaced by doubleheaders, same day or Saturday and Sunday. With max length of 300 laps or 300 miles. Just my 2 cents.

I agree, with exceptions for existing lap numbers for the Daytona 500, Southern 500, and the Coke 600.