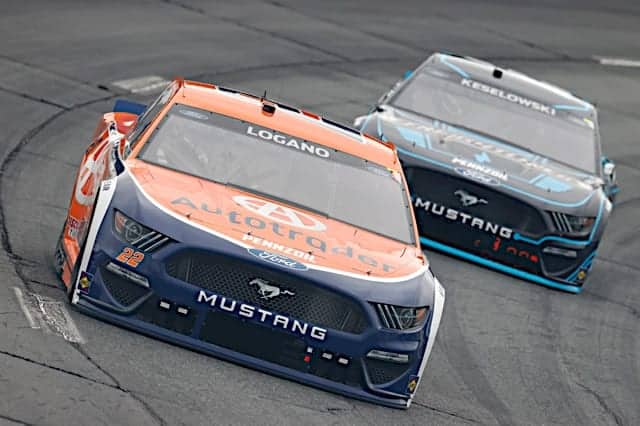 Team Penske has been the beacon of stability in NASCAR for the past eight years.

That cohesion was officially upended one week ago when Roger Penske confirmed Brad Keselowski’s departure from Team Penske by announcing Austin Cindric will transition into the No. 2 Ford for the 2022 season.

Change is extraordinarily rare at Team Penske, particularly in regards to its flagship No. 2 car. Hall of Famer Rusty Wallace piloted the No. 2 from 1991 through 2005 and amassed 37 of his 55 career wins in it. Kurt Busch stepped into the ride in 2006 and drove the car to eight wins before switching to the No. 22 car after 2010.

Keselowski was Busch’s replacement in 2011. His rise was meteoric and critical to the organization, leading the program to its first Cup Series championship in 2012.

Since Joey Logano was brought into the fold in 2013, the only significant change at Team Penske was the addition of Ryan Blaney, first on a part-time basis and eventually full-time in 2018.

That’s what makes the present so startling. Suddenly, Penske’s winningest Cup driver is out the door, departing for Roush Fenway Racing to pursue team ownership while driving another iconic car, Jack Roush’s No. 6 Ford.

Logano is jolted to the lead driver on staff entering NASCAR’s Next Gen era. Blaney’s role shifts to mentor. Cindric, son of team president Tim Cindric, joins the Cup ranks on a full-time basis after select starts this season.

Penske is known as “The Captain” for a reason: There is steadiness and planning at every corner of his businesses. But what he didn’t plan on was Keselowski departing so soon, declining to re-sign, although Penske “expected to get Brad in for another two or three years.”

“You get surprises all along in your business and athletic career,” Penske said on July 15. “Brad had talked about ownership before. We’re at a juncture here where you have a changing of the cars. It was a good time for him to decide, does he stay or does he go? I think at the point that we came to the decision he was going to move on, it gave us a chance then to take a real step back and look and see do we start with new blood that really hadn’t been there at all, that didn’t have a lot of history other than maybe driving in the lower series?  And we decided to take that route.”

It’s a road seldom traveled by the experienced team and business owner, particularly at the top level of his NASCAR organization. That steadiness that Penske’s known for, however, has drivers voicing support for decisions made following Keselowski’s exit.

“There’s obviously a lot of changes, but I think there’s a lot of opportunity,” Logano said. “I think we’ve all seen what Austin’s capable of doing in the Xfinity Series. Something that I think about him is his work ethic is up where it needs to be. He probably works as hard — I don’t want to say he works as hard as me, but pretty damn close to it.

“I think we’re able to push each other a lot. I think his road course ability is something that we’ve seen is very strong already in the Cup Series, so I think he’s gonna be able to bring in a lot to the table.”

Blaney, 27, has been the least experienced of the team since making his first Cup starts in 2014. That changes when Cindric joins the program full-time in 2022.

“I’m no longer [the] young guy over there, so that’s nice so I don’t get stuck with the shit end of the stick on some things […],” Blaney laughed. “Yeah, big shakeup at Penske. But with the circumstances, Brad moving over to Roush, things like that, I think there’s two younger, very talented drivers coming in that I think will do a really good job and I’m really excited to work with them and see what they can do.”

The timing to bring Cindric into the No. 2 car as well as Harrison Burton into the Wood Brothers Racing No. 21 car, Blaney said, feels right.

“I think right now, next year with the new car is probably the best time to be a rookie and coming in because everyone’s kind of starting over,” he said. “I don’t think the learning curve is nearly as high as a rookie coming in this year and trying to learn these cars. Everyone’s going to be learning the new ones, so I think they’ll do a really good job.“

At 31 years old, Logano will now be the elder statesman of the team, a role he feels he’s ready to take on.

“I feel like Brad and I led it together throughout the last few years,” said Logano, the 2018 Cup champion. “When we first started it was just me and him, right? It was just the two of us, so we were able to do a lot together. And I feel like Blaney’s definitely raised his game over the years, as you can see. So I think, yeah, it’s gonna be a test to lead the organization around. And it’s not just the drivers, though, that do that. It’s a whole team.

“I think when you look at (Competition Director) Travis [Geisler] and (Vice President of Operations) Mike [Nelson] and Tim, Roger, (Vice Chairman) Walt [Czarnecki], everyone that that’s able to steer the steer the ship, I’m glad to be part of that team. But it’s everyone working together to figure out the right direction from there.”

Heading into New Hampshire Motor Speedway, doubting the current performance was fair. Keselowski netted finishes of 10th or worse in nine of the last 10 races and Logano had finished 10th or worse in four of the prior six races. Only Blaney was building momentum with three top-six finishes in the last four contests.

But the company found its magic once again at the Magic Mile. Keselowski, Logano and Blaney finished third, fourth and fifth, respectively, following hard-fought battles for the lead between Keselowski and Blaney. Keselowski led 53 laps and Blaney was out front for 64 circuits.

”We know where we gotta find some speed,” Blaney said after the race. “I mean, that’s been obvious the last two or three months. It’s just the way it is on every type of racetrack — 550 [horsepower], 750, road courses. And we’ve been working our butts off to try to find that. And it’s everything — body, chassis, setups, motors. Everyone’s working together to try to get better and better.”

Change is constant in NASCAR, particularly with the addition of the Next Gen car in 2022. But never has it been so prevalent at Penske, a pillar of consistency in an ever-evolving sport.

Is the team done changing? Blaney’s current contract was signed at the beginning of 2020 and runs through 2022. He said Sunday those talks haven’t started yet and is nothing he’s begun to think about.

For now, while the Next Gen era is about to rise in NASCAR, that process is already underway at Team Penske.

Great article but I think “massive upheaval” is a bit much.

I believe Austin is the real deal. Him and Blaney will do Penske proud. They both know how to race and win at this level. The scary thing is that they could pick up some real bad habits from the driver of the 22. Without Brad around next year they will be taking advice from the king of blocking. There is a reason why Austin has the #2 car next year. Unlike the 22 driver he is a real racer. Good luck Austin.

Think the drivers are the easiest components in an organization to replace. Its the infrastructure and connections with other firms that take soo much time to build.
So in that sense I think the title was a little bit over the top.