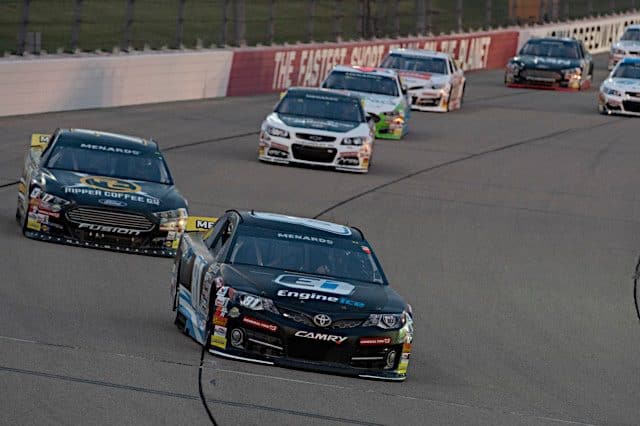 The Olympic Break continues. With the majority of the biggest series being off last weekend, it almost feels like the offseason in many ways. Driver behavior is not really dissimilar. Just look at anything Kyle Busch has posted in the last week once he got over the shenanigans at Loudon.

That said, not everyone spent last weekend at home. Motocross teams raced at Washougal Motocross Park in Southern Washington. Formula E was at the ExCel Center in London, where Sunday’s race saw some outright shenanigans from Audi Sport ABT Speedline. Not as ridiculous as last year’s impostor issue, but still pretty crazy. There was also plenty of dirt track racing and short track racing in general.

In stock car racing, likely the biggest race on offer last weekend was Saturday night’s Shore Lunch 150 at Iowa Speedway for the ARCA Menards Series. It is the only race that will be run on the D-shaped, 0.875-mile speedway all year.

With FOX Sports down to only eight ARCA Menards Series broadcasts a year these days, Saturday night’s 150-lap race from Iowa Speedway was on MAVTV. Thankfully, MAVTV has a relationship with NBC Sports or I would have been unable to watch this race at all. In addition to being aired live on MAVTV, the race was streamed live on NBC Sports’ TrackPass service, where I was able to watch.

Personnel-wise, this race was not all that different than other races. Bob Dillner was on play-by-play with Jim Tretow alongside. Dave Rieff, who as recently as a year ago was calling play-by-play on ARCA races on FOX Sports 1, was in the pits.

Dillner has a very particular way that he likes to call races. Admittedly, he’s not the most engaging commentator out there. Tretow really helps a lot here.

This was not the most exciting race. Ty Gibbs led 149 of 150 laps. The only lap Gibbs didn’t lead was on an early restart when Taylor Gray beat him back to the line.

There were also some confusing moments. For instance, Joey Iest crashed out of the race on lap 26. We couldn’t get a definitive view of the incident, but it seemed like Iest just got too high in turn 3 and got in the dust.

Thing is, Iest wasn’t the only driver to crash there. Conner Jones also crashed in the same general location, but there was no footage of his crash. My best guess is that Iest spun down the track and clipped Jones, but I couldn’t tell for sure. There just weren’t enough cameras available. The only replay we got was from Mason Diaz‘s car.

Rusty Wallace, who helped design the track back when he was still active in the Cup Series, joined Dillner and Tretow in the booth for part of the race, describing how having Indy cars at Iowa resulted in the current design there. Originally, it was going be 12 degrees, then a rather abrupt transition to 14, but INDYCAR convinced them to make it more gradual. I really wish Wallace stayed longer than he actually did.

MAVTV had an aerial shot Saturday night, which is a rarity for ARCA races. In this case, it was a Lucas Oil-branded helicopter. It got the job done and provided some nice aerial views at times. Just wished that it was actually used during green-flag action.

Post-race coverage was a little shorter than I’m used to with ARCA races on MAVTV, but that was because of the litany of cautions early in the race. Viewers still got post-race interviews with Gibbs, Daniel Dye and Corey Heim. There was also a check of the unofficial results before MAVTV left Iowa.

Overall, this race broadcast didn’t have all that much action. Gibbs executed yet another butt-whoopin’ on the field. There was some decent action to be had in and around the restarts, but you got beyond eight laps past a restart and there just wasn’t much going on.

I felt that Tretow was pulling the most weight on the broadcast.  Dillner was doing play-by-play, but he really didn’t sound into it all that much.  I was never particularly a fan of Rusty Wallace when he was an analyst with ESPN, but I felt like a Tretow-Wallace pairing in the booth would be better than Dillner-Tretow. However, that would likely not happen due to Dillner’s broadcasting pull.

That’s all for this week. Next weekend sees the Olympic break continue for NASCAR and INDYCAR teams. The biggest show next weekend is the Formula 1 Grand Prix of Hungary at the Hungaroring. If you’ve seen any of the discussion over the past week or so, then you can imagine that it’s going to be quite the affair. That said, it is far more difficult to pass at the Hungaroring than it is at Silverstone.

ARCA Menards Series teams will be back in action at Indiana’s Winchester Speedway, while the ARCA Menards Series West will be at Colorado National Speedway. The Whelen Modified Tour will be at New York International Raceway Park, a mouthful also known as Lancaster Speedway, Saturday night. That is a very quirky short track in which the frontstretch is part of a dragstrip. There will also be a number of short track events that will supplement the racing action this weekend.  TV listings can be found here in the Television menu.

During the Olympic break, all of the regular columns here at Frontstretch are being given one of the two weeks off. I have chosen to take next week off. However, there will still be editions of the Critic’s Annex in the Frontstretch Newsletter. I still haven’t written about the Ambetter Get Vaccinated 200 from Loudon yet (that will run Wednesday), and I do have plans for additional Annex pieces prior to Watkins Glen. I do recommend subscribing as I have a little more space to go into detail on certain things. For instance, I wrote an Annex column last week on INDYCAR’s new TV deal with NBC Sports.

Boy you are negative as hell. Ty Gibbs has the equipment. Rusty is a HOF driver. Better than Marty Smiths projected fake voice crap. And the fake is kiddos don’t care about cars anymore. They have Uber, Lyft and many state laws have changed because these kiddos get f-ed up and die. So many state laws require 18 for the DL now. Who cares about MAVTV? It’s just a seed in the wind. Worst article on Frontstretch ever.