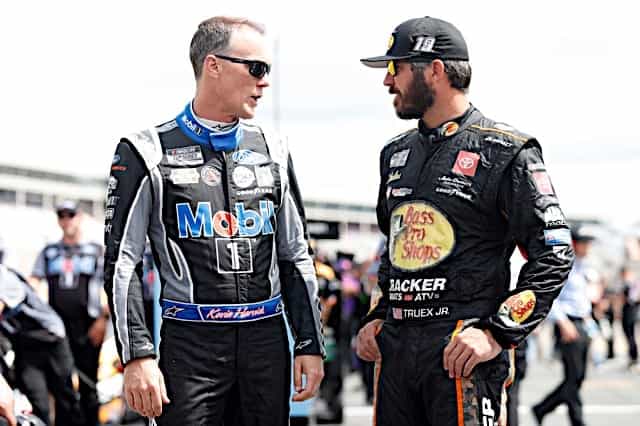 The NASCAR Cup Series playoffs may be approaching quickly, but there are still plenty of playoff points up for grabs.  Each of the four remaining regular season races offer seven NASCAR playoff points – five for the race win plus one for each of two stage wins.  Taken together, there are still 28 playoff points on the table.  The drivers who earn them are sure to have a larger advantage on their competition once the postseason actually begins.

Ever since NASCAR implemented the current version of their postseason format, with playoff points that accumulate and roll over to each round, we have known that playoff points are essential to a championship run.  Martin Truex Jr.’s 2017 title proved as much.

But now that we have had four seasons with the current system, it is worth exploring just what kinds of advantages these playoff points have provided historically.  For instance, is there a certain number of playoff points a driver must earn to have a good shot at advancing to the championship race?  Can a driver’s playoff point total predict when they will be eliminated from title contention?  Or, if a driver scores very few playoff points during the regular season, do they have a chance to compete for the championship at all?

The table below is an attempt to answer these questions.  For each season, drivers are listed in order of how many playoff points each had earned at the beginning of the postseason.

Key: the colors represent when each driver was eliminated: brown for round one, orange for round two, green for round three, and blue if they reached the championship race.  Overall champions appear in bold, while regular season champions are italicized.

Perhaps the first thing to note about this table is all of the blue names at the top.  Generally speaking, the championship race does consist of four drivers who began the postseason with a large amount of playoff points.  The magic number is right around 25.

In fact, there are only three instances of a driver entering the playoffs with more than 25 playoff points but not reaching the championship race.  One of those was Kevin Harvick’s shocking round three elimination last year.  Kyle Larson’s round two elimination in 2017 is another.  But while there are exceptions, drivers who begin the postseason with at least 25 playoff points should be confident in their chances to reach the championship round.

The playoff points of the eventual champion tend to have more variability, ranging from Truex’s 53 to Joey Logano’s 14 for his championship run in 2018.  In Logano’s case, a round three win was essential for his passage to the championship race, an event he also had to win to claim the title.

Chase Elliott took a similar path to the championship last year.  Although he began the postseason with the lowest amount of playoff points relative to the other championship round drivers, winning the final two races of the season sealed the Cup Series title for the No. 9 team.  Playoff points may be critical for getting to the Championship 4, but the race itself is truly a clean slate.

Unlike Logano and Elliott, Truex and Kyle Busch (2019) won their titles by beginning the playoffs with the most playoff points.  In fact, all four regular season champions also happened to earn the most playoff points in their respective seasons.  That trend may not hold up this year as Larson and Denny Hamlin battle for the points lead.

Larson has currently banked 32 playoff points, the most of any driver, but he trails Hamlin in the overall point standings by 13.  Hamlin, on the other hand, has banked only five playoff points.  If Hamlin were to hold on to his lead without any more race or stage wins, he would start the postseason with 20 playoff points.  That would not be nearly enough to top Larson, who would start the postseason with at least 42 points if he finishes second overall without any more race or stage wins.

Likewise, if Larson takes the points lead from Hamlin and wins the regular season, he would begin the playoffs with at least 47 playoff points.  This year’s regular season championship battle will definitely be one to watch, especially as it relates to Hamlin’s and Larson’s chances of reaching the final round of the playoffs.

Turning back to the table, we see that at least half of the field begins the postseason each year with playoff point totals in the single digits.  No driver from this zero to nine range has ever reached the Championship 4.

However, two drivers from this range have advanced to round three in all four seasons.  A great example is Aric Almirola in 2018, who got to round three after earning only one playoff point in the regular season.  The key to Almirola’s playoff run was a round two win at Talladega, which gave him automatic passage to round three.  Kurt Busch repeated Almirola’s feat last season, winning a round two playoff race at Las Vegas Motor Speedway after earning just one playoff point in the regular season.

Yet as Busch and Almirola ultimately discovered, having so few playoff points immediately put them back into must-win situations when round three began.  That round three deficit is the biggest hurdle for playoff underdogs to overcome.  Winning only becomes more vital as the playoffs progress.  For teams who begin the postseason with single-digit playoff points, it makes more sense to try to go for wins and maximize performance in the playoffs themselves instead of trying to collect points as a main strategy for advancement.  For example, points carried Alex Bowman to round three of the playoffs last year, but he and his team could never fully overcome their playoff point deficit without a victory.

Ultimately, there will still be plenty to race for in the last weeks of the regular season.  The Hamlin/Larson battle will have significant implications for the postseason, but so will the battle for third through sixth in overall points.  Those spots are being contested by William Byron, Kyle Busch, Logano, and Elliott, who are separated by 38 points.

Which of those drivers earns enough playoff points to get to the 20-25 range?  Can drivers like Truex and Bowman reach victory lane again and pad their playoff point totals?  And once the playoffs begin, which drivers from the bottom half of the grid will prove to be resilient in the postseason?  The 2021 Cup Series season has already had its share of surprises.  Perhaps this is the year where an underdog earns an unprecedented round three win, putting them one step away from winning it all.

You can usually separate the contenders from the pretenders once the playoff field is set. A lot of payoff points may get you to round three, but the championship race comes down to execution and opportunity.

Nice to see those stats laid out, so thanks for that. My first thought was, I don’t think four years provides a large enough data set to really be able to establish trends. After looking at it though what can be determined comes as no surprise;

It will be interesting to see if anything unexpected turns up after another 10 years of data.

Personally, while I will always wish we were using a full season format where all 36 races were equal, I will say that this current system does tilt the field heavily to those who have run the best during the entire season. Much better than any of the other post-chase formats.