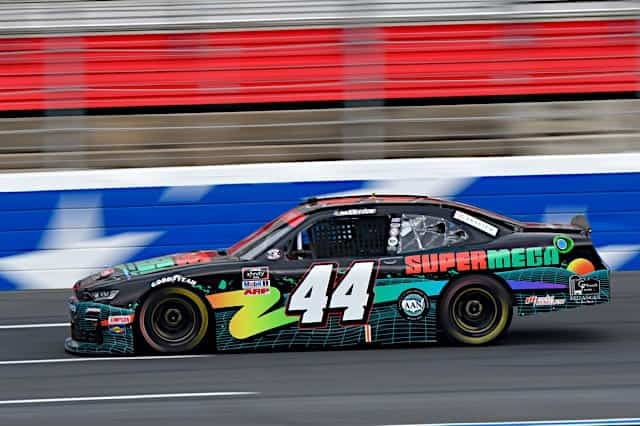 The owner-driver of the No. 44 Chevrolet Camaro in the NASCAR Xfinity Series, Tommy Joe Martins, will drive a limited schedule in 2022, according to a report on TobyChristie.com.

Martins, who has been competing full-time in 2021 for Martins Motorsports, has announced that he will be using the entry to field a handful of drivers in 2022 while taking a personal step back from Xfinity racing.

“We’re maxed out with what we’re doing,” Martins said in an interview with TobyChristie.com. “I feel like to go to the next level, or even to stay at the level we are at, it’s probably going to take more than what I can bring to the table as a driver. We’re going to need some other people that want to buy into what we are building here.”

The 34-year-old has one driver already lined up to take the wheel of the No. 44 but has not disclosed who it will be. However, the Mississippi native did mention it to be a driver that has yet to make an Xfinity Series start and currently competes in one of the three ARCA Menards Series.

“It will be his first time in a NASCAR race, and it will be with us in something that we built,” Martins said. “I think he is going to go on to have an incredible career. The fact that we are the ones that are getting the chance to debut with him next year – the sky is the limit there.

“There is a lot of talent out there, and I feel that we’ve shown that we are a competitive Xfinity program, and I think that is going to be attractive. This seat is going to be open for about half the season now that we are looking into and sell and get some other drivers in the car.”

Martins’ goal is the same as many part-time driver car owners: maximize the talent available for each track.

“I definitely think that my strengths have probably been mostly on the mile and a halfs, some of the short tracks,” explained Martins. “I like to think of myself as a pretty good, all-around racer.”

Martins’ best finish this year was an 11th at Talladega Superspeedway. He currently sits 19th in the points standings.

The full driver lineup is yet to be announced.