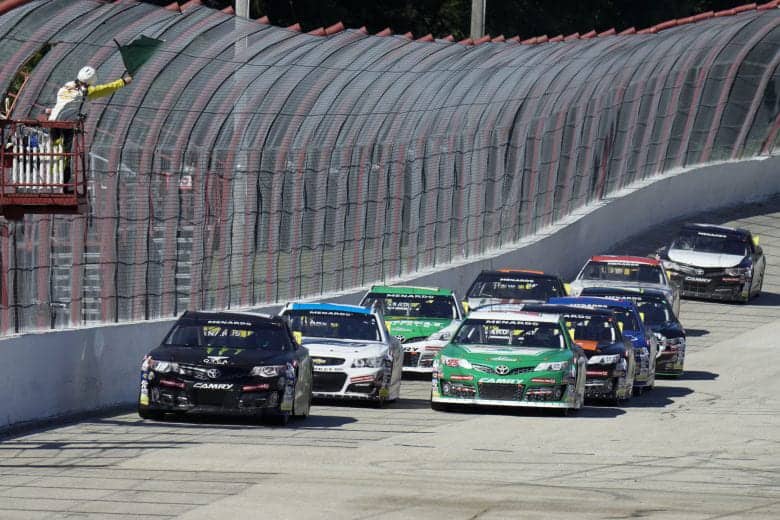 After the 11th race of the ARCA Menards Series season, there’s a new driver atop the point standings. On the strength of a series-high six victories, Ty Gibbs has overtaken Corey Heim going into the 2021 Calypso Lemonade 200 at Winchester Speedway, the ½-mile short track which ARCA will visit for the 26th time in series history on Saturday, July 31.

Gibbs has been dominant this year. He’s won the most races, tied for the most top-five finishes, accumulated the most pole awards, and led more than four times the amount of laps compared to the second-most (945 to 198).

Only 18 years old, Gibbs attributes his success this year to his No. 18 Joe Gibbs Racing team.

“My guys, my team — I wouldn’t be anywhere near here without them,” Gibbs said after winning at Iowa Speedway. “They’re family to me and they work so hard. I feel like the difference between them and other teams is they want to win every weekend. They work hard during the week and they’re basically my family. I go eat lunch with them every day. I wouldn’t want to be racing with anyone else.”

Gibbs has a prime opportunity to add to his dominance and stretch his points lead at Winchester. Last year, he led 199 of the 200 laps at Winchester in dominating fashion en route to victory, leaving only five drivers on the lead lap.

Mind you, Heim has four wins and he has finished inside the top 10 in all 11 races this season. He only has one finish outside of the top five, a seventh-place finish at Mid-Ohio Sports Car Course. His remarkable consistency has him only four points out of the points lead.

“It’s definitely in the back of my head but my job is to go try to win every race we can and not make any mistakes,” he told Frontstretch. “If we have a bad day, that’s obviously going to affect the points battle but the same goes for every week. We could win a race and still try to win the next one. Even if we have a bad race, we’re going to try to win the next one. My job is to do everything I can to succeed and hopefully, the points work themselves out at Kansas.”

Surprisingly, Daniel Dye has wheeled his No. 21 GMS Racing Chevrolet upfront. After finishing seventh in his ARCA debut at Elko Speedway on July 10, he cruised to victory at Berlin Raceway the following week and led all but two laps. He followed that up by finishing second at Iowa, scoring the second-most points in the race. While he isn’t contending for the main series title, Dye has been impressive thus far.

?CHECKERED FLAG?@danieldye43 follows up his Berlin win with a 2nd place finish at @iowaspeedway!

Like Dye, Taylor Gray isn’t competing for the ARCA title, but he strives for his first career main series victory. Actually, his changed schedule due to an off-the-track injury that sidelined him for several races makes his goal clearer.

“We have nothing to lose,” Gray told Frontstretch. “It honestly takes more weight off our chest … we’re basically racing for wins.”

Moffitt and his crew chief Derek Smith will make their first respective start at Winchester. Moffitt is third in the points, with only two finishes outside the top 10.

The fourth full-time driver Nick Sanchez continued his string of top-10 finishes, now at nine, with a fifth-place finish at Iowa. While his streak has him fourth in the points, only 16 behind third-place Moffitt, Sanchez wants some good luck to fall his way to land him in victory lane.

“We’ve had a lot of bad luck this year, but we’ve fought through it,” Sanchez told News From The Pits. “So, I think one of these days when everything goes our way, I think we’ll get a win.”

Other than Heim, the Venturini Motorsports duo of Parker Chase and Toni Breidinger have combined for one top five and three top 10s. Chase earned his career-best finish of fourth place earlier this year at Charlotte Motor Speedway and Breidinger netted her lone top 10 of 10th place in the 2018 race at Madison International Speedway.

For these two, Winchester will be a challenge regardless of the speed in their Toyotas.

The Calypso Lemonade 200 will take place this Saturday, July 31 at 8 p.m. ET with TV coverage provided by MAVTV and available on TrackPass on NBC Sports Gold.

None of Ty Gibbs quotes ever mention how he thanks the Lord Jesus. Omission and censorship is how the media operates.