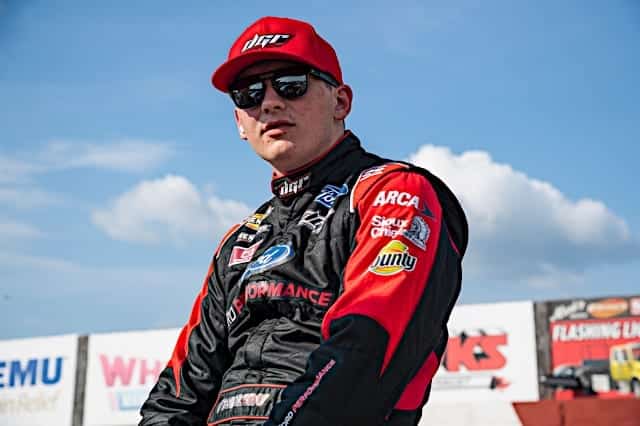 After his first year of competing across all three ARCA series yielded one win (coming in the 2020 penultimate ARCA Menards Series West race), 13 top fives and 20 top 10s, Taylor Gray seemed destined to record even better results in year two.

Unfortunately, on April 8, Gray was involved in an off-the-track accident which resulted in injuries that temporarily put him out of commission.

Gray returned to competition in the ARCA race at Elko Speedway on July 10. In the three starts since his return, Gray has reeled off three top fives, though he remains in search of his first career main ARCA series win.

Prior to the ARCA race at Iowa Speedway, Gray spoke with Frontstretch about his return to racing, how he is aiming for wins now that he isn’t chasing a championship, his focus on his upcoming Truck Series races this year and his 2022 plans.

Mark Kristl, Frontstretch: How did your recovery from your injury go?

Taylor Gray: I am doing good now. I feel like we are at the point now where it is in the past, and we are all good. I feel good, and I am taking it one day at a time.

Kristl: How was it getting back in the car for the first time since your injury?

Gray: The part that scares everybody the most is it did not scare me at all. I am hard-headed as it is. I don’t even really think about it. I’ve made it my past and gotten over it.

“Guess who’s back, back again…” pic.twitter.com/nHxSGHe1lu

Kristl: How, then, has your development for this year changed? You were supposed to run part-time Trucks, part-time ARCA and full-time ARCA East. Now you are not contending for the East title and your schedule obviously changed.

Gray: We basically go from trying to run for a championship to try to win races, and we have nothing to lose. It honestly takes more weight off our chest. What I told these guys at Berlin Raceway was, we can race each other rough and race with respect, but they must understand they are running for a championship, and I am not. I can pay the favor back. We’re basically racing for wins.

Kristl: Have your expectations changed too?

Gray: Honestly, I feel like our expectations have stayed the same. We hold ourselves to the high expectation of we should run well every weekend. There are going to be some weekends where we struggle and run fifth. That is kind of been our number these past couple of weeks. But I think we have developed as an organization, developed as a team with [crew chief] Chad Johnston and we keep our expectations high.

Kristl: Your David Gilliland Racing teammate Thad Moffitt is running full-time. How has he helped you get up to pace quicker?

Gray: It is hard because they run the 1.5-mile tracks, the superspeedways, and when they run short tracks, I am usually there. So it is harder, but I feel like we help each other out. We lean on each other for advice, information, share what we have picked up in film notes this past week up to the race. It is a good matchup for our team where we share advice and information to help each other when it is needed.

Kristl: Your older brother Tanner Gray runs full-time in the Trucks. You will be racing against him when you make your Truck starts this year. How cool will it be to race against him in those races?

Gray: It’s going to be cool. Although I’m not going to go race and say, ‘Ah, he’s my brother, I have to race him differently.’

I’m going to race him the same way I race everybody else. If it comes down to it, we will race each other hard for the win. He is running for the championship so that plays a little bit of a factor. In my opinion, you don’t really care about that though. You just race for wins.

Kristl: What have you learned from Tanner? He is one rung up the NASCAR ladder.

Gray: Tanner and I both have worked hard to get up the ranks. He obviously has given me advice on how to drive the ARCA car before I got into them when I was racing late models. It’s hard for me to give him advice when he is driving Trucks and I do not. He has been a good older brother, and we work together. We stay positive throughout the weekend, and we work as a team to get better.

Kristl: David Gilliland Racing is full of young drivers, such as yourself, your brother Tanner, Moffitt and Hailie Deegan. How neat is it to be a part of the youth movement of the team?

Gray: It’s good. You see the development of the drivers. One thing that has been somewhat challenging is we have an organization that is still developing and continually getting better, so it must balance out. As a driver, you learn as much as you can. It’s going well so far, and we must keep on progressing.

Kristl: What tracks on your upcoming schedule are you looking forward to racing at?

Gray: I’m more focused on my Truck races. So I focus on each ARCA race we go to and whatever race is coming up, but my focus for the rest of this year is running well in my Truck races and being [as] prepared as possible. That is No. 1 on my list.