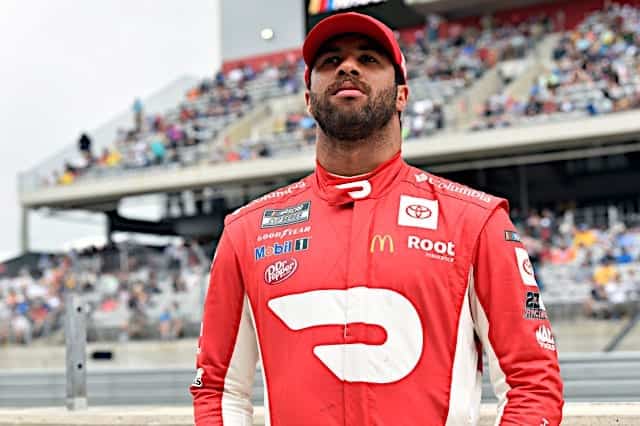 We’re not even seven full months into 2021, so there’s obviously a long time between now and the start of the 2022 NASCAR season. There will obviously be some things that will be different next year. Some are known, such as the Team Penske plans to move Harrison Burton and Austin Cindric into the NASCAR Cup Series. The same goes for Brad Keselowski‘s future as a driver and part-owner at Roush Fenway Racing.

But there’s at least one more unknown at this time: Who will drive the most dominant car in the NASCAR Xfinity Series this year, the No. 54 car out of Joe Gibbs Racing?

Clearly, JGR has some big decisions to make between now and next year. What becomes of the No. 20 with Burton moving up? Where to put Ty Gibbs, and should that be a full-time opportunity? Those are obviously thoughts, as well as others, weighing heavy on the mind of Coy Gibbs and the other leaders of the Gibbs organization.

Here’s one thing that should be clear. If the No. 54 is again a multi-driver lineup, it makes too good of sense on multiple levels for one of those drivers to be Bubba Wallace.

For starters, and this is something that traditionalists of a certain mind detest, there’s a direct benefit in NASCAR Cup Series drivers running companion events. With participation limits in place, Cup drivers have to pick and choose what races to look at running, and the result is two or three Cup drivers in a field as opposed to what you’d see 10 years ago with most of the top-10 finishers being comprised of Cup drivers.

Because of this, if a Cup driver is one of the few able to double-up, the advantage of track time and other gleanings is significant. You only need to look at this season with the driver of the No. 54 car for proof.

The last three times that the Xfinity Series has raced, the No. 54 won. The first two of those, by Kyle Busch at Road America and Atlanta Motor Speedway, were followed a day later by finishes of third and second in the Cup events. Then, at New Hampshire Motor Speedway, Christopher Bell‘s Saturday (July 17) triumph came a day prior to a second-place finish, his best since a win at the Daytona International Speedway road course earlier this season.

For a driver like Wallace, who along with his team 23XI Racing, is still getting a feel for one another and the quirks of driving a Toyota, all the seat time that can be gained is all the better. Plus, if Toyota truly wants to put weight behind drivers across its diet of drivers, why wouldn’t you want an opportunity for one of your most visible drivers to find ways to succeed?

The Xfinity Series, to a degree, has two types of drivers: those looking to use it as a way up the racing ladder and those who have already gotten to NASCAR’s apex and race for the fun of it while also possibly using it to strengthen their Cup program. Wallace has already done the former, running full-time seasons in 2015 and 2016 for Roush Fenway Racing and in part through 2017 before funding ran out.

Heck, why not set up Mike Wheeler, Wallace’s crew chief for 23XI Racing, atop the pit box to pick up more? Especially prior to COVID-19, it was not uncommon for Cup crew chiefs to randomly make their way to pit road to examine trends or even look at the wear on tires following pit stops, seeking the smallest advantage that could be found. I still remember back in 2009 at Atlanta, standing behind a JR Motorsports pit and following pit stops, seeing Chad Knaus walk up and closely examine tire wear following a round of pit stops.

Wallace in the No. 54 for a handful of races would fit that bill nicely.

The other thing is this. Love him or loathe him, Wallace is one of the most visible drivers for casual fans who may not be the typical diehards. Media metrics and the number of comments on stories that mention Wallace in any way back that up. If you put Wallace in an occasional Saturday race, especially if one of his sponsors comes along for the ride, it draws eyeballs to those races, and who knows? Maybe those fans go from casual to die-hards.

The opportunity is there for Toyota to strengthen its overall driver lineup by working Wallace into the rotation at JGR. Whether or not it’ll be able to make that materialize remains to be seen.

Just pump out a random BW article to generate clicks and ad revenue.

I skipped right to the comments to say thanks for reminding me to wrap some electrical tape around the garage door pull down rope handle. Last week another hummingbird got stuck in the garage and we think they’re being lured in by the red handle of the pull down rope.

Happy ending –used a telescoping fishing net & eventually was able to get the little guy and free him.

My guess is that Ty will end up in the Xfinity #20. Having Bubba run a few Xfinity races in the #54 might help, but expectations need to be lowered… Bubba Wallace is no Ty Gibbs.

Bubba is exactly the type of Cup driver who I am fine with running in the Xfin series, winless. I don’t mind seeing Cup drivers who haven’t turned the corner yet run in the lower series. Once a Cup driver has multiple wins in the Cup series then I hate seeing them run in the lower series.
It is a double edged sword though. It could help his performance in Cup but it could also backfire if he doesn’t produce in the lower series. If that happens then he is liable to lose his Cup ride because of lack of results. If a Cup guy can’t go down into a lower series and dominate then the owner may just realize there is a lack of talent and hire someone else.

That could be the reason he doesn’t drive the 54. If he bombs in the Busch series in that car his days in Cup are doomed.

I don’t think so.
More likely the 54 car’s driver lineup was probably set for 2021 before Bubba was even announced as driver of the 23.

Maybe it’s safer for him this way. Better to have people wonder if you’re over-rated than to fail and remove all doubt.

Bubba has been in top notch equipment when he was in the truck series. He was also competitive, and winning races. As far as lacking I don’t think so.

Only three guys at Toyota deserve that #54 ride based on performance: John Hunter Nemachek, Chandler Smith, or Ty Gibbs. All fine choices….

Bit Bubba Wallace is better for fan attraction , every body pulling for him, half to win and the other half to loose

Interesting how different drivers are perceived. Bubba will get the usual responses, no matter what he does. Ty Gibbs, who has taken the Kyle Busch, beat up on the little leaguers to a new level, is seen as the next great thing. No wonder the decline continues.

BW has 134 Cup races, 85 Xfinity and 40* truck races under his belt. He shouldn’t need more seat time. If Kyle Busch doesn’t attract fans to Xfinity races why would anyone think BW would? Does anyone pay any attention to the empty seats at Xfinity and truck races? TV money is the only reason these two series even exist.
Next year will determine Wallace’s future in a good Cup car. He has not shown that he can consistently run with the top Cup drivers. Getting media coverage does not result in good race finishes. Based in demonstrations of anger after races I wonder if Bubba doesn’t lose it occasionally on the race track.This could account for his inconsistency.

Bill B
Reply to  Al Torney

RE: “If Kyle Busch doesn’t attract fans to Xfinity races why would anyone think BW would?”

Agree. I thought that sentiment was a stretch as well. Unless they put a Kardashian in one of the Xfin cars, or maybe someone like Gordon, Stewart or Johnson, I doubt any current Cup driver will have fans that normally wouldn’t watch gathering around the TV to watch the Xfin race.

Bubba wallace is nothing but the current version of Danica Patrick, gets all the hype and TV time, but can not back it up with on track results

But she brought in the fans, a whole new base ( female )

I would like to see the data behind your claim please.

Great idea. Bubba needs the seat time in a Toyota and it would attract more viewers.

Makes sense turn a guy whosnever won anything in a car of that magnitude then what. Happens when he runs 15th

It’s an extra “All-Star” car for JGR which has been driven by Busch, Hamlin, Truex and Bell. The drivers in that car are all on a temp basis, so I see absolutely nothing wrong with putting Bubba in the car. He has won in KBM trucks, so he should do fine in JGR Xfinity car. I don’t get what the griping is about. Chandler Smith, Ty Gibbs and JHN should also get a shot, but what they are really looking for is a full-time ride.

Quit smoking the cheap stuff, it’s messin with your mind.

The thing is any brand new team takes awhile to mesh, then you add the new team with new manufacturer, and add the pressure of Michael Jordan being your boss. What do you have? At least 2 full seasons to get a win. He was in inferior equipment at Petty Enterprises, unlike Danica who was in some of the top equipment. I think we all should just wait and see. However, if he drove and won a couple Xfinity races, his confidence could go through the roof which would help him more than anything!

Black, White, Red or Green, nobody is Waltziing into a Cup car and winning a few races and wrapping up the season with a string of top 10 finishes. Of course goals are important. However, for a man that struggles with depression, I can’t imagine that kind of pressure not resulting in Bubba withdrawing in more ways than one. The man is a mortal man. Give him another season. Personally, I’m much more interested in seeing whether or not Michael Jordan is actually able to promote diversity in NASCAR. I believe the answer is yes and I plan to be a part of that legacy starting next season with 23×1 racing.

Tom B
Reply to  Reece Ward

Every article about Bubba should end with the fact that he admits suffering from depression. Bubba needs to be reminded of his media whore comments.
Is Jo banned from commenting?

Tom B
Reply to  Kellu

Maybe they should put Ty in the 23, the car needs a driver

He could not drive my pick up truck on a dirt road.

Is this guy serious? Why, because he’s African American? There are a lot of drivers out there that would be a much better choice than Bubba Wallace for the 54 car.

Last edited 9 months ago by MikeinAz
8
-5

Why don’t you stop pushing Wallace to the front.he just don’t know the ability. ANNOUNÇER’s have been doing this.Wait but I’ll he does so me thing to show he can drI’ve

Bubba will never win unless they rig it for him