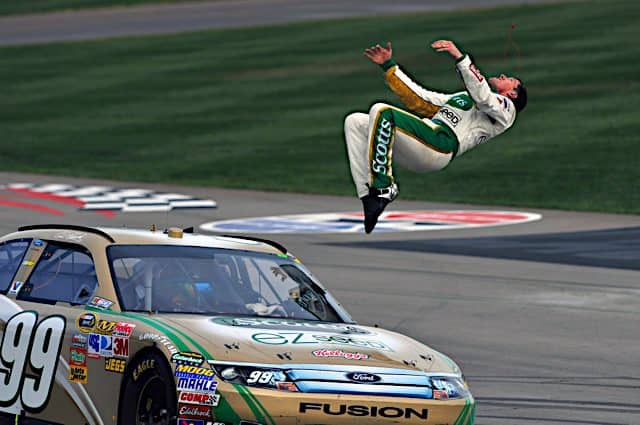 Harrison Burton is the latest driver to come up through the Toyota development ranks only to wind up in NASCAR Cup Series racing for a different manufacturer. Should Toyota Racing Development be making more of an effort to keep prospects?

Luken Glover: Toyota has followed a motto of quality over quantity several times in the past decade. This commitment has led the manufacturer to lose drivers like Kyle Larson, Erik Jones and William Byron, though he was associated with JR Motorsports before he drove for Kyle Busch Motorsports. Now it has lost Harrison Burton and could be on the cusp of losing more. 23XI Racing is looking to expand as soon as next season, adding an option for years to come. There is always the factor of a team switching manufacturers as well. A couple of bumps along the road may occur when their veterans retire, but TRD likely has very few regrets thus far. A couple of more cars wouldn’t hurt, but it is not in a desperate situation either.

Josh Roller: Money and opportunities talk. Burton, and before him Hailie Deegan, looked up the pipeline and didn’t see sunlight at the other end. The only way that Toyota can keep more of its development talent is to have more seats available. Looks like it may at least have a sixth seat in the Cup Series in 2022, but that’s not even one quarter of the max field. It’s a tough position for Toyota because it doesn’t need to force out Kyle Busch, Denny Hamlin or Martin Truex Jr., but it also needs to keep talent in the lower divisions should one of those drivers unexpectedly say, “I’m done.”

Joy Tomlinson: I don’t know if Toyota is really worried about keeping prospects when just two big Cup teams field Toyotas, Joe Gibbs Racing and 23XI. JGR has three 2021 winners and the points leader from this season while the latter is a brand new team, so it’s unlikely that a seat would open up there. However, if one of the other organizations changes to Toyota, it should consider keeping a standout prospect in its program. Currently, Ty Gibbs is the only one that stands out among the drivers who run Toyotas and will probably stay in one throughout his NASCAR career.

See also
Eyes On Xfinity: A JGR 'Star Car' Should Include Bubba Wallace

Brad Keselowski recently expressed his desire for Cup operations to field Camping World Truck Series teams. Do you like the idea?

Roller: Absolutely, especially for Ford. Ford needs more of a presence in NASCAR outside of the Cup Series. The decline of Ford’s development program has coincided with Roush Fenway Racing’s retraction. Brad Keselowski seems to realize that Ford has fallen for a number of years behind Toyota and Chevrolet, to an extent, when it comes to finding and grooming talent. I’m all for RFR with Keselowski involved re-entering not only the Truck Series but also the Xfinity and ARCA Menards series.

Tomlinson: Yes, but not every team. Front Row Motorsports already fields the No. 38, which is fine considering David Gilliland drove for the team in the Cup Series. Keselowski ran a Truck organization from 2008-2017 so it makes sense for him to want to return to Truck ownership. But the Truck Series is different from Cup and should be distinct; if several Cup teams added trucks, it could take playoff spots away from ones that have been there for years. Keep the Truck Series unique from Xfinity and Cup.

Glover: Absolutely. An expansion like this would really help teams in the pipeline and developing. It provides more scouting of young talent and allows the team to develop drivers. Some have voiced complaints with Cup drivers running in lower divisions. With the limit on Cup drivers doing so, it truly does benefit drivers to learn. Young Cup drivers could benefit from running for their team in the Truck Series. Just look at what Ryan Preece did at Nashville Superspeedway, earning his first Truck win in his first career start. Options such as developing talent, opening doors, providing backups and gaining experience are intriguing aspects if a Cup team can afford to do so.

Sage Karam will make his Xfinity debut at the Indianapolis Motor Speedway road course for Jordan Anderson Racing. Can he contend for the win?

Tomlinson: The win? No. Jordan Anderson’s team is not quite that strong to contend for wins yet, and this is Sage Karam’s first race in a stock car. However, he could get a top 10. AJ Allmendinger, Austin Cindric and Justin Haley should be favorites to win this event.

Glover: With successful Xfinity regulars who have had road course success such as Cindric and Allmendinger, I do not see Karam besting them for the win, especially in lesser equipment. However, I would not be surprised to see him produce a top-10 result, or maybe even a top five. JAR has overachieved in many ways, and adding Karam for the Indy road race allows it to continue to build. It just isn’t ready to pull an upset yet.

Roller: Karam won’t contend for the win on the road course at Indianapolis. I expect him to finish top 20. Anything more than that is icing on the cake for a stock car debut.

Should auto racing be an Olympic sport? If so, what type of cars and courses would they need to utilize?

Tomlinson: No, it shouldn’t. I mean, yes, motorsports competitors are athletes, as they need to be physically and mentally fit to endure hot temperatures and everything else that goes on in racecars. The Olympics are a bit different, though; there’s several different sports using mostly manpower. There are some cycling competitions as well as skateboarding and horseback riding, but all require a certain set of physical and mental skills. If racecars joined the games, it would likely be an extra and unnecessary expense and would have to run at local racetracks. The NASCAR season is long enough; let the drivers have a break.

Glover: My first thought on this goes to Cars 2 with the fictional World Grand Prix. I would like to see it in the Olympics, but I just don’t know how feasible it would be. Putting them in sports cars likely would be the most equal option. As for the course, I would give the host country a bit of advantage. For example, the U.S. gets the Olympics in 2028. Auto Club Speedway sits just under an hour away from the host city of Los Angeles. I would like to see that track host an Olympic race. Another option would be to separate it into two divisions. Have drivers from series such as sports car, Formula 1 and INDYCAR in one division, while drivers from NASCAR, NASCAR Euro and the Asian V8 Championship compete in stock cars.

Roller: I’m not sure it’s actually necessary. When you look at the sports involved in the Olympics, each sport is essentially the same throughout the world with at most subtle changes. Auto racing is the most diverse and splintered sport in the world. The cars, rules and cultures vary and zeroing on one type of car would ultimately turn off drivers who feel ostracized for racing a car that is fundamentally different. So, I say no to auto racing being an Olympic sport. But if it was, model it after the Race of Champions.

Racing…an Olympic sport??? If the only objective is to waste more money, then yes. Nationalistic countries like Germany and Japan would spend a fortune and heavily promote the event.
Can you imagine the IOC doing post race tech???
But if mixed pairs badmitton and dancing around with a ribbon on a stick is an Olympic sport why the heck not racing??? In fact, take a note from swimming…have 25 classes for both men and women. Like lots of other things today, the Olympics has lost its way, and per the ratings, its relevance.
Racing needs to quit “adding to the experience” and start cutting prices for the weekend to get new fans in the stands. The pure visceral experience of a Nascar race will get them to come back, but they, and the greedy communities around the tracks, have priced themselves out of the budget of their former fan base. And the ‘beautiful people’ they hope to attract will go to the Grand Prix before they will mingle with what’s left of the Nascar faithful.
I’m going to my first Cup race in a couple of years at Texas in October. I am looking forward to it. It will be interesting to see what the crowd really is at a Playoffs race.

Motorsports as an Olympic sport? Thats ridiculous. But motor racing is not an individual sport. Engineers, mechanics, and cheating. Hardly the stuff for the Olympics.
Cutting prices is a noble idea, but an emotional one , not a practical one. Are you any more likely to attend if ticket prices are $10 cheaper? I dont think so either.

No to stock cars and NASCAR as an organization in the Olympics. To be truly international, it would have to be a sports car race on a road course or even a street course. It would be up to any driver interested to get enough sponsorship to fund a car. There are a couple Cup drivers who might be competitive in a truly international style of racing.

The Olympic sport can be Burnouts judged by an unbiased panel of experts.