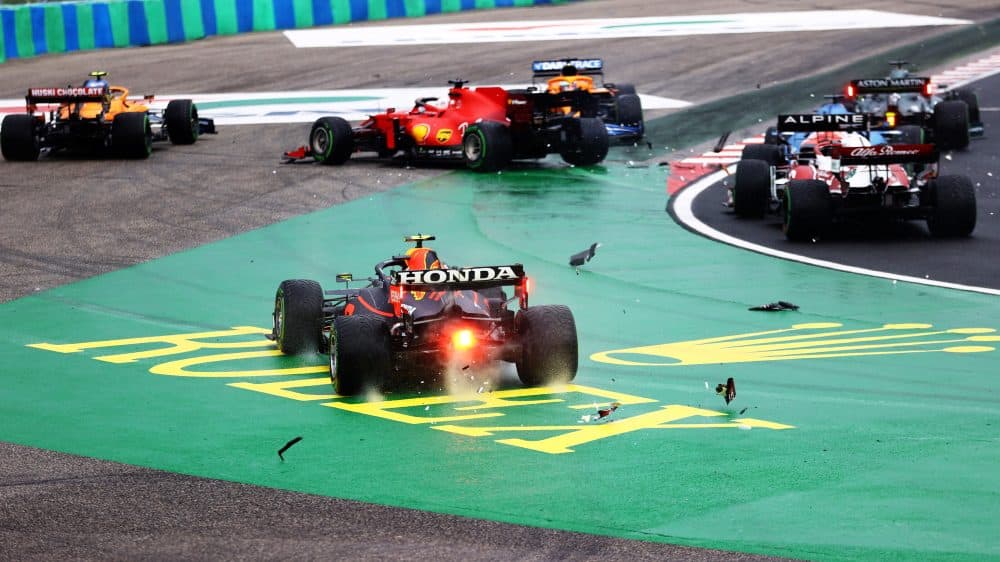 After the fireworks last time out in Silverstone, Formula 1 entered the Hungaroring for this year’s edition of the Hungarian Grand Prix. Little did anyone know, they were about to witness the wildest race of the year.

Following a first-lap pileup, a red flag, rain and a hard charge from Lewis Hamilton, Esteban Ocon held on to claim his first F1 victory. It was the first win under the Alpine name and first win for Renault since the 2008 Japanese Grand Prix.

Following a standout performance in Baku, Sebastian Vettel gave Ocon everything he had. However, the Aston Martin driver settled for second. Completing to podium was an exhausted Hamilton; after running a two stop and being dead last at one point in the race, Hamilton fought back but just couldn’t get there in time to pass the leaders.

Charles Leclerc, Valtteri Bottas, Lando Norris, Sergio Perez and Lance Stroll all failed to finish due to crash damage from lap-one contact. Nikita Mazepin was the final retiree after contact with Kimi Raikkonen in the pits took him out.

With rain dampening the track, the drivers elected to start on intermediate tires. When the lights went out, Hamilton and Verstappen cleared the field as they soared into turn 1, however behind them calamity was about to strike. Norris broke a little early, which lead to Bottas slamming into the back of the McLaren. The contact sent Norris hard into both Red Bulls, while Stroll lost it as well, knocking out Leclerc and spinning Ricciardo.

Debris, cars and dirt littered the track, leading to stewards to red flag the race immediately. Red Bull did the best it could to repair the car. Bottas and Stroll were later given five place grid drops for the next race in Belgium.

While the race was stopped, the rain dissipated, which lead to everyone but Hamilton pitting for slicks before the second starting start. With Hamilton stuck out on inters, the rest of the field blew past the Mercedes as he made a pit stop to get back on slicks.

With passing on track so hard, Hamilton went for undercut on lap 20. Verstappen’s team made a great stop, but it wasn’t enough to beat Hamilton our of the pits. The lone Red Bull was stuck behind a train of cars lead by Mick Schumacher.

Despite a still challenge from Tsunoda, Hamilton got all the way to fifth before making his second stop for mediums on lap 48. Up at the front, in their own worlds, Vettel and Ocon were fighting tooth and nail for every inch.

Hamilton got out of the pits and faced his toughest challenge yet, Alonso. The Spaniard knew he needed to hold up Hamilton if his teammate had any chance of winning. Lap after lap, Alonso answered the call. On lap 65 Alonso locked up, allowing Hamilton to get past him and eventually Sainz.

It was too little too late, as Ocon held on to pick up his first career win just weeks after signing a multiyear deal to stay at Alpine.

“Just a big thank you for the trust that everyone is putting into me,” Ocon said post race. “When you are out of Q1, you are P17, you don’t know where you are, but the team put their trust in me and we are back where we belong. With Fernando, we are forming a real strong duo, we are pushing the team on. I tell you, we are going to have a great Monday.”

Runner-up Vettel gave it everything he could but in the end just came up one spot short.

“I’m a little bit disappointed,” Vettel said. “I felt I was faster but (Ocon) didn’t make a single mistake and it’s a tricky track to overtake on. I had a very, very bad start but it turned out to be the best place to be. I found myself at the front of the pack, it definitely made our race today.”

Vettel’s second-place effort was short-lived, though, after a post-race penalty disqualified his finish. Guidelines state that cars need to have at least one liter of fuel left in case F1 decides to check it, and the Aston Martin had just 0.3 sitting in the tank. Each driver in the top 10 moved up one spot: Sainz inherited the podium’s final position, while Raikkonen ended up 10th with the change.

On the last lap, Franz Tost pitted Gasly to steal away the fastest lap point from Hamilton and Mercedes. With podium, Hamilton now takes a six-point lead with him to the next race in Belgium. Given Verstappen was up 32 before the controversy in Silverstone, it means a tense battle is on for the rest of the year.

The Williams team held on for eighth and ninth to get six points lifting out of last on the grid. Latifi scored his best finish of his career, while Russell equaled his best result, scoring his first points as a Williams driver. Williams now sit ahead of both Haas and Alfa-Romeo in the constructors standings.

The championship now heads off on this summer break, before returning at Spa-Francorchamps for the Belgian Grand Prix on Aug. 29. Hamilton is the defending race winner, with Red Bull and Verstappen looking to end the disastrous run it has been on lately.

A great race, although Bottas may be thanked, or cursed for that. A surprise winner who certainly deserved it. Rain abd brain fade what a combination.

Really? Our opinions may differ.

Didn’t you get the sarcasm?

Sometimes I can get a bit defensive when someone insinuates that the WWE on wheels is a superior product.
My apologies for overreacting.