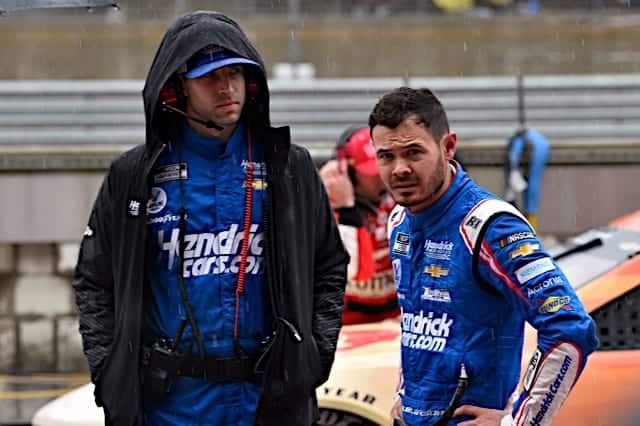 ONE: Which Hendrick Motorsports is for real?

Hendrick Motorsports caught fire this summer, its best performance in the NASCAR Cup Series since Jeff Gordon and Jimmie Johnson were on the roster in 2014. From Dover International Speedway in May to the first Pocono Raceway event the end of June, HMS won six straight races and produced the first 1-2-3-4 finish in team history.

Kyle Larson led the way, posting three wins and seven top-two performances in an eight-race stretch. But he wasn’t the only success story. William Byron became the youngest driver ever to post 11 straight top-10 finishes at age 23. Alex Bowman muscled his way to a contract extension with three wins. And Chase Elliott, despite some bumps in the road, remains poised to defend his championship on the strength of multiple road course victories.

All seemed to be tilting HMS’ way. But then there were reports of NASCAR “suggesting” a change to the nose of their car following a dominant victory by Larson at Nashville Superspeedway. Whatever happened, the team looked a bit awkward on oval tracks heading into the break. Larson went from 269 laps led at Atlanta Motor Speedway to a pedestrian 18th-place finish. None of them finished inside the top five at New Hampshire Motor Speedway, as only Elliott (66 laps led) got out front in either of those events.

Is it just a small bump in the road? Are they sandbagging? After all, how many years did we see Johnson struggle in July and August only to catch fire during the chase? It’ll be hard to judge HMS on its merits the final four races of the regular season; only one, Michigan International Speedway, comes close to the cookie-cutter ovals we see three times in the playoffs.

The goal, of course, is to put the entire quartet of drivers inside the Championship 4. That’s never been done in NASCAR history, although Stewart-Haas Racing put its four-man roster inside the Round of 8 in 2019. Chances are HMS bounces back, but if it doesn’t? We saw the cracks in late June and early July.

As Silly Season trudges on in the age of NASCAR Next Gen, we know this much: Brad Keselowski won’t be back with Team Penske in 2022. Taking on an owner/driver role at Roush Fenway Racing, Keselowski is just one of what could be a handful of NASCAR playoff drivers moving on from their current rides.

Kurt Busch, red hot before the Olympic break, is rumored to head to 23XI Racing after Chip Ganassi Racing was sold to Justin Marks’ group. Less likely to move on are Michael McDowell and New Hampshire winner Aric Almirola, but both are on the last year of their deals. Others, like Matt DiBenedetto, could join the party with an upset victory in the next four races.

It’s not easy, but lame ducks have made their way into the Championship 4. Jeff Gordon, facing retirement, won Martinsville Speedway in 2015 and took the No. 24 team into the final four. Martin Truex Jr., facing the closure of Furniture Row Racing, nearly defended his championship in 2018 with a team folding after the season.

Keselowski, Team Penske’s leader for over a decade, has nothing to lose during this final sprint. Ironically, his 2012 championship happened in the midst of another major change as Penske was in their last year running Dodges. If anything, his lame duck status becomes a wild card in a year three teams (HMS, Joe Gibbs Racing, Penske) are almost certain to take 11 spots in the 16-driver field. You see how hard he and Ryan Blaney raced at NHMS?

THREE: The ever-evolving Next Gen narrative

The sport’s impending turn toward the Next Gen is no small tweak. Owners are bending over backwards to buy charters, sensing opportunity within a fresh start. The development of the chassis has taken years and is the largest competition change yet under the three-year reign of NASCAR President Steve Phelps.

Insiders understand, nearly 15 years after the Car of Tomorrow debacle, how a botched new car rollout can decimate the popularity of the sport. The Next Gen debut was even pushed back an extra year due to the COVID-19 pandemic. At this point, there should be excitement surrounding its rollout, similar to an expansion team in stick-and-ball sports as fans yearn for better competition, particularly at intermediate tracks.

Instead, the last month has been rocky. Chassis rollout was delayed, finally jumpstarting during Olympic break after safety tests held things up. NASCAR needed additional review with experts, dealing with negative press and some blowback from drivers after conflicting reports about their crash dummy test from Talladega Superspeedway.

As I wrote about a few weeks ago, the incident revealed a deep divide between the driving corps and executives down in Daytona Beach. Both sides aren’t talking well to each other at a crucial time in the Next Gen car’s development. And is now a good time to mention we haven’t seen this car racing side-by-side, in traffic against a dozen cars or more, to see its aerodynamic effects?

Some have suggested NASCAR roll back the Next Gen even further. I don’t think that happens because of the costs involved and the red flag messaging that sends. So how do they right the ship? More short-term PR pain is ahead in terms of lost jobs in race shops (chassis will be created by Technique Chassis, LLC). Past history leaves NASCAR guilty before proven innocent in the eyes of too many. There’s work to be done here.

Typically, Silly Season is dominated by drivers hopping rides from one team to the next. We’ve had years with higher-profile shakeups, like Kyle Busch moving to Joe Gibbs Racing and Dale Earnhardt Jr. taking his place at Hendrick Motorsports (2007 for 2008). But I don’t think I’ve ever seen a year with this many ownership moves pending, certainly not in the franchise era.

It’s like a generational shift is taking place. Chip Ganassi? Out after 2021. (Although if Honda enters the sport down the road? Don’t be surprised to see him back.) Keselowski now has an interest in Roush Fenway Racing, setting up a long-term succession plan. Kaulig Racing is moving up into Cup with two cars next season. GMS Racing is looking to make a full-time debut at the Cup level. Jeff Gordon is now the clear heir apparent at Hendrick over the long-term.

And those are just the changes we know. Rumors are running rampant; Kevin Harvick had to deny at New Hampshire he’s interested in buying JTG Daugherty Racing (that was one of the wilder ones I hadn’t heard). At any given time, birds chirp about any of the mid-tier teams, from Richard Childress Racing on down, being gettable for the right price.

How many charters change hands is yet to be seen. But there’s a generational shift happening here that could change the balance of power in NASCAR over the next decade.

FIVE: A Cup championship worth watching

The playoffs this year are top heavy, but it’s been awhile since the Cup title appears this wide open. At least last season, we thought Denny Hamlin and Harvick were the clear title favorites before both struggled in the playoffs.

This year? Larson would likely be the top choice among most experts; out in Vegas, he’s the leader in the clubhouse at +280. But remember, he didn’t even compete in a full season last year. Larson has a history of postseason foibles and will need to put the past behind him.

Truex has won three times, including at the Phoenix Raceway track that’ll be the spot of the Championship 4 finale. Elliott remains a serious threat, especially considering his track record at the Charlotte ROVAL and Martinsville. Kyle Busch has been the fastest driver outside of HMS this summer.

That’s my current Championship 4, but would you really be surprised if Hamlin, Bowman, Byron, Joey Logano, Blaney or Keselowski made it, based on the success they’ve had this year? I think we’re heading into the most wide open postseason in recent memory, a top-heavy prize fight that’ll make the final portion of the NASCAR season fun to watch.

All great points to ponder.

Living in the Denver, Colorado area my biggest What/if to ponder is what if FRR had been able to keep 5 hour energy (or another great sponsor). Furniture Row showed all these new teams that a small team can compete, and win, a championship.

Good article Tom to set up the stretch run to the end.
NASCAR needs to relax testing limits with the new car. Have a 2 day open test at a short track, 1.5 miler, RP track and road course where all were welcome. Make it mandatory that every team has to attend at least 2 of the tests. If there was a way to do it where all information/data gained was shared by all teams it would go a long way to ensure that the new car would be ready to go at Daytona. If they don’t, they will be spinning the roulette wheel.