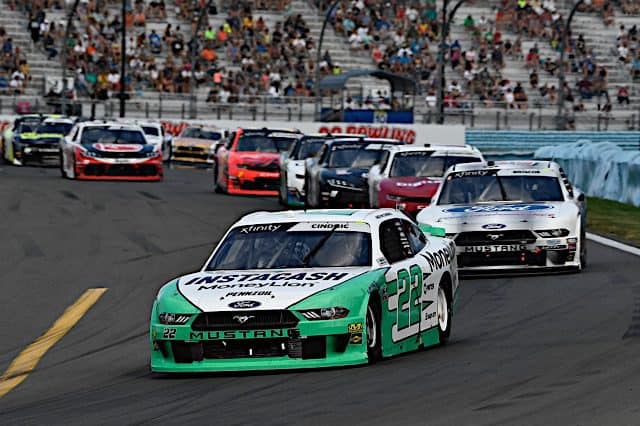 The NASCAR Xfinity Series returns to action this weekend at Watkins Glen International after the two-week break.

Forty-one cars are entered for 40 spots, barring any changes. With there being no qualifying this weekend, the No. 13 MBM Motorsports Toyota driven by David Starr will not make the race.

Road racing ace Michael Munley will make his debut with JD Motorsports in the No. 6 Gutterman Services Chevrolet.

Josh Bilicki returns to the series for his second start of the year with SS Green Light Racing. Bilicki will pilot the No. 17 Ford.

Two Cup Series drivers will participate in order to get some extra track time. Austin Dillon will drive the No. 23 Mayhem Athlete Chevrolet for Our Motorsports. Dillon has appeared with Bassett Racing and in a substitute role for JR Motorsports this season.

2016 Xfinity Series Rookie of the Year Erik Jones returns to the series for the first time since 2019. Jones will pilot the No. 31 Bommarito Automotive Group Chevrolet for Jordan Anderson Racing.

Kris Wright will climb behind the wheel of the No. 26 Toyota for Sam Hunt Racing for the fifth time this year.

Means Motorsports’ No. 52 Chevrolet will be piloted by David Smith in his 2021 debut.

Two-time Xfinity winner Ty Gibbs will look to earn his third win of the season in the No. 54 Monster Energy Toyota. It will be his 10th start in the No. 54.

Preston Pardus hops in the No. 90 DGM Racing car.

Kyle Tilley will be pulling double duty this weekend, making his Xfinity debut for BJ McLeod Motorsports in the No. 99 ERA/Battle Associates Toyota.

The 20th race of the Xfinity Series season is set to take the green on August 7 at 4 p.m. ET on CNBC.