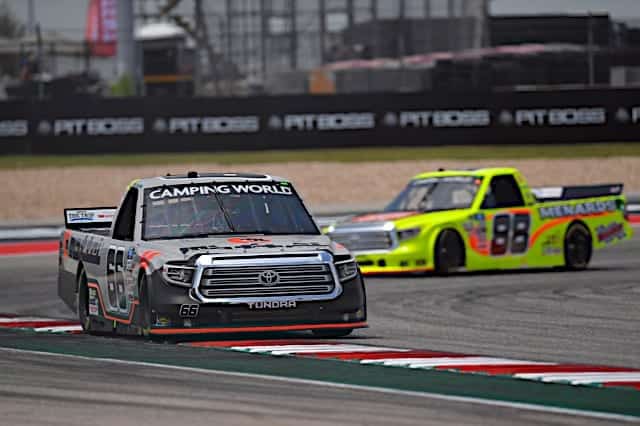 The NASCAR Camping World Truck Series will take to the 11 turns of Watkins Glen International  for the first time since 2000 on Aug. 7.

It’ll be the Truck Series’ third and final road course race of the season.

The 72-lap feature will see a full 40-truck field on the storied road course, with one team, the No. 72, excluded due to not having enough points; the race will not feature practice or qualifying, putting the series in line with the Cup and Xfinity series racing this weekend as well.

Paul Menard returns for only his seventh Truck start after making his first since 2007 earlier this season at Circuit of the Americas where he finished 11th. Like he did in Austin, the veteran will drive the No. 66 Thorsport Ford this weekend.

Kaz Grala returns for his third Truck start of the season behind the wheel of the No. 02 Chevrolet for Young’s Motorsports.

Parker Kligerman will drive the No. 75 Chevrolet for Henderson Motorsports in his first event since Nashville Superspeedway earlier this year.

Corey Heim makes his second career Truck start this weekend in the No. 51 Kyle Busch Motorsports Toyota. The ARCA Menards Series full-timer made his first start at Darlington Raceway earlier this year where he finished 23rd.

Sam Mayer will also run the Truck race this weekend in addition to his Xfinity Series entry for JR Motorsports. He’ll pilot the No. 32 Chevrolet for Bret Holmes Racing.

Lawless Alan will also make his fifth  Truck start this weekend in the No. 34 Chevrolet for Reaume Brothers Racing.

Will Rodgers will make his Truck Series debut behind the wheel of the No. 41 Chevrolet one week before his Xfinity Series debut at Indianapolis Motor Speedway.

Bobby and Roger Reuse will compete in the event for Jordan Anderson Racing’s No. 3 and CMI Motorsports’ No. 49, respectively.

Only one Truck team will be excluded by points this weekend. The No. 72 entry for CMI, driven by Samuel LeComte will no qualify for the Saturday event.