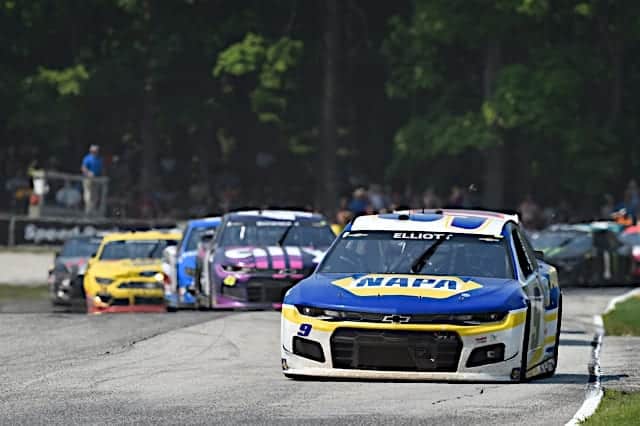 To his delight and the field’s dismay, the first two races back from the Olympics break will be at Watkins Glen International on Aug. 8 and the Indianapolis Motor Speedway road course event on Aug. 15, the latter in its inaugural appearance on the Cup schedule. These two races will serve as a golden opportunity for Elliott to score more wins and stage points to prepare for this year’s playoffs.

However, there will be some drivers who hope to make Elliott’s quest a little more difficult. Their past road course resumes show that they could be hot contenders for the win and deny Elliott the chance to break Gordon’s all-time record this year.

With how the last two races at the Glen unfolded, one can bet no other driver will be hungrier to beat Elliott than Martin Truex Jr.

See also
5 Points to Ponder: The Rest of the 2021 NASCAR Season

Truex has four career road course wins, including one at the Glen in 2017, but he also has plenty of painful memories at the track. He was on the tailgate of Elliott’s Chevrolet on the final lap in 2018 before running dry on fuel. In 2019, he tried to reel in the younger Elliott without success, watching the No. 9 pull away from him at the finish. He was challenging for the win in 2016 before contact with Brad Keselowski sent him around in the final turn of the final lap.

Needless to say, Truex will likely have all of these things fresh in his mind when the field takes the green flag at the Glen, and he’ll certainly do his best to not let Elliott deny him for a third straight year there.

Look out for the Candy Man, folks. Kyle Busch would also be glad to beat Elliott and earn himself another checkered flag on a road course.

Busch has four total Cup Series wins on these types of tracks, with two wins apiece at Watkins Glen and Sonoma Raceway. If you want to add his opportunistic win in this year’s Busch Clash, that brings the total up to five. Two of his five Xfinity wins this year came on the road courses of Circuit of the Americas and Road America.

Elliott may have good reason to worry, as Busch is scary good at Watkins Glen. In 15 Cup starts at the New York facility, he has finished outside of the top 10 just twice, with a worst finish of only 20th. He has come in with clutch victories on road courses before, whether by being in the right place at the right time or just having a car too fast to catch. He’ll need to pull one of these rabbits out of a hat in order to get into victory lane ahead of Elliott.

They say to keep your friends close and your enemies closer. But what about your teammate? That’s where Kyle Larson comes in.

Larson’s win at Sonoma Raceway in June was another piece to the puzzle of his stellar 2021 season. Not only was it his first-ever road course win, but it showed how much improvement Larson has made on those tracks.

For Watkins Glen, Larson’s stats are reputable. He has a 13.6 average finish, with a best result of fourth in 2014 as a rookie. He was contending for a top-five finish at the Daytona International Speedway road course before going for a self-inflicted spin in turn 6. At COTA, he started second and finished second to Elliott. He also had a competitive car at Road America, running in the top 10 before having to pit late for fuel, finishing 16th.

If Elliott doesn’t have Truex or Busch to fear, he should at least keep a close eye on the No. 5 team. If he makes a mistake, Larson is a guy he wouldn’t want behind him when it happens.

Christopher Bell pulled off his first Cup victory on the road course at Daytona in February, a second straight upset winner to kick off the 2021 season.

His Daytona win came in his 38th series start, just his third appearance in a Cup road course event and his second start for Joe Gibbs Racing. He finished runner-up to Elliott at the most recent road course of Road America. Had it not been for crashes at COTA and Sonoma, his average finish on these tracks would be much higher.

Bell has one top five and two top 10s at Watkins Glen in the Xfinity Series, also winning at Road America in 2019. He knows what it’s like to score big on road courses, and beating Elliott will be an added objective in his quest.

Off the track, Elliott and Ryan Blaney may be good buddies. But on the track, they race each other as hard as any other competitor they face.

The two had their first major on-track altercation in the Busch Clash, with Elliott spinning Blaney out of the lead in the final chicane. Busch passed both of them to steal the win away. Even though Blaney was on the losing end of that thrilling finish, he did win the inaugural 2018 Charlotte Motor Speedway ROVAL race in similar dramatic style for his second career win.

In four career Cup starts at the Glen, Blaney has one top five, two top 10s and an average finish of 11th. While that may sound decent, it’s certainly not excellent, at least compared to Elliott’s high marks.

For Blaney to be a road course winner again, he’ll have to be less of a buddy to Elliott and drive a little bit harder to get after him these next two weeks.

I’m sure he’ll want to put the Busch Clash out of his memory bank and replace it with a victory over one of his good friends.