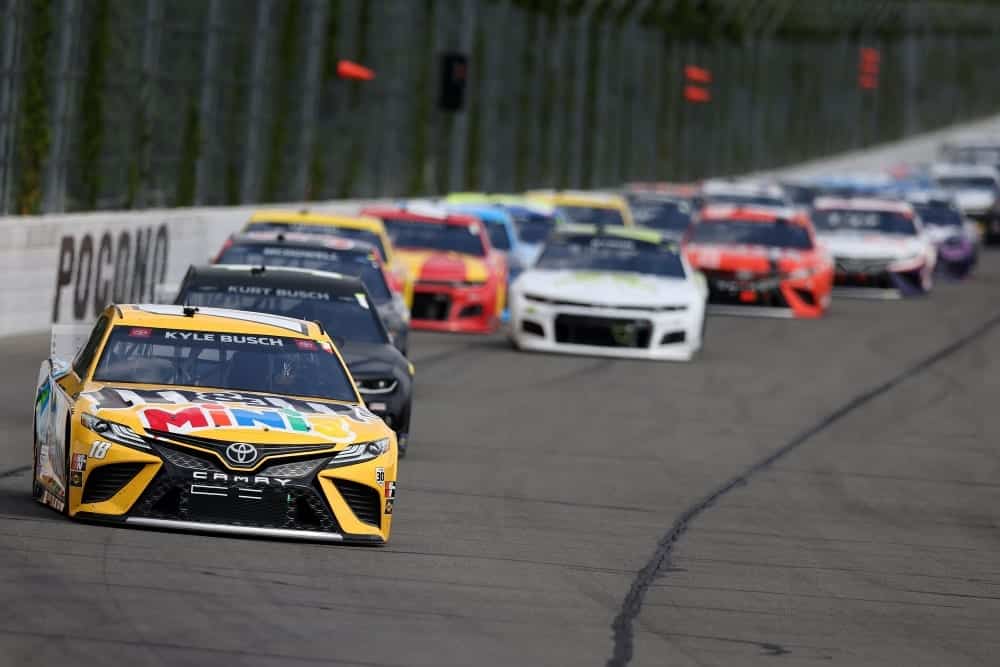 Similar to how Formula 1 operates, I liked NASCAR’s two-week break this summer for the Olympics. Do you think the break should remain on the schedule moving forward? – Tony L., Dayton, Ohio

Absolutely, it should. To beat a dead horse, I’m as big of a “less is more” person when it comes to NASCAR as anybody. Shorten the season, shorten the races, do everything to drive up the appetite for the product. A break in the heart of the season to not only drive up the demand but also allow drivers, teams and everybody associated with the sport a much-needed and welcome break is a good move.

Thirty-six races is a hell of a year. It’s long, grinding and can take a lot out of you. Heck, going to a handful of races per year tires me out, let alone 36 (and 14 in a row to end the season). Breaking up the longest campaign in professional sports won’t necessarily hurt the on-track product.

“I’d rather have a summer break and not have all the breaks at the beginning of the year,” Kevin Harvick said via NBC Sports. “I’d take it off the front end because everybody’s fresh and energized. I think having this two-week break really allows these guys in the shop and on the road to be able to actually have two, for-sure weeks off that they can plan around. That’s something very important to the families of those individuals.”

“I think it’s about time for us, a good summer break anyways to be able to go out and do things in the summertime that typically you’d always have to wait for the wintertime. I can’t tell you how many winter vacations I’ve been on and places that I’ve gone in December, January versus actually being able to go somewhere far away in July.”

In a vacuum, Rowdy’s comments can be viewed as a first-world problem (which it is), but other drivers echo both Harvick and Busch’s sentiments. Breaks can be good, and in this case I believe it is.

First off, let’s not put the cart before the horse. Busch is rumored to be slotted into 23XI Racing’s second car (assuming they’re able to obtain a charter), and with Chastain’s announcement today (joining Trackhouse Racing), it paves the way for Busch to head on over to 23XI.

But it’s entirely too early to handicap which driver will have a better 2022 campaign. Chastain is still in the hunt for a playoff spot, Busch (on the heels of his Atlanta Motor Speedway win) seems to be coming on at the right time and Chip Ganassi Racing is hoping to go out with one final hurrah before the closure of their NASCAR organization at season’s end.

Trackhouse has impressed with Daniel Suarez in their maiden season and, with Richard Childress Racing’s uptick in performance (and help developing the NextGen car), are poised to continue their upward trajectory next year.

As is 23XI, though, with another year under their belt being associated with Joe Gibbs Racing and theoretically a stronger base to expand to two teams. But with each driver headed to a new team (and one likely with a new manufacturer), some schedule tweaks expected and the obvious unknown variable of the NextGen car, who’s to say what Trackhouse and 23XI (and Chastain and Busch) will A). deem a success and B). perform like?

It’ll take several races into the 2022 season to know where each driver and team stand. But with Chastain’s never say die attitude (and career path) as well as this next stop likely being Busch’s last in the Cup Series, both drivers should be rather happy and content with where they stand.

I don’t like the break, as a long time fan (1988). I want to see racing! This is a manufactured break for the sake of NBC’s Olympic coverage. However, it is good for the families in the sport. Shortening races makes no sense and I am sick of reading that crap here at Frontstretch. I’ve been following you guys for years but how does shortening a race make any sense? NASCAR used to have 500 mile “endurance” race instead of catering to the cellphone attention span deficient generation. Cars and parts and pieces are more durable. When I grew up, we planned a Sunday around church and then grilling out and the afternoon race and nap: not staring at a plastic backed piece of technology. Shortening the races so you can stare at your phone, go have a craft beer and polish your hipster glasses makes no sense. What makes sense is having the same traditional length races (because the cars are more durable) killing stage racing and letting them play out as they should (along with a full season champion, not one fake drama race). I’ve been a fan for 33 years (almost half the time NASCAR has existed, hell I even stopped watching baseball (and the 1994 strike) to watch racing. But the gimmicks have to stop. Run 3 pace laps, bring my qualifying and practice back and make the races longer-stop creating WWF wrestling drama for kiddies on Tik Tok.