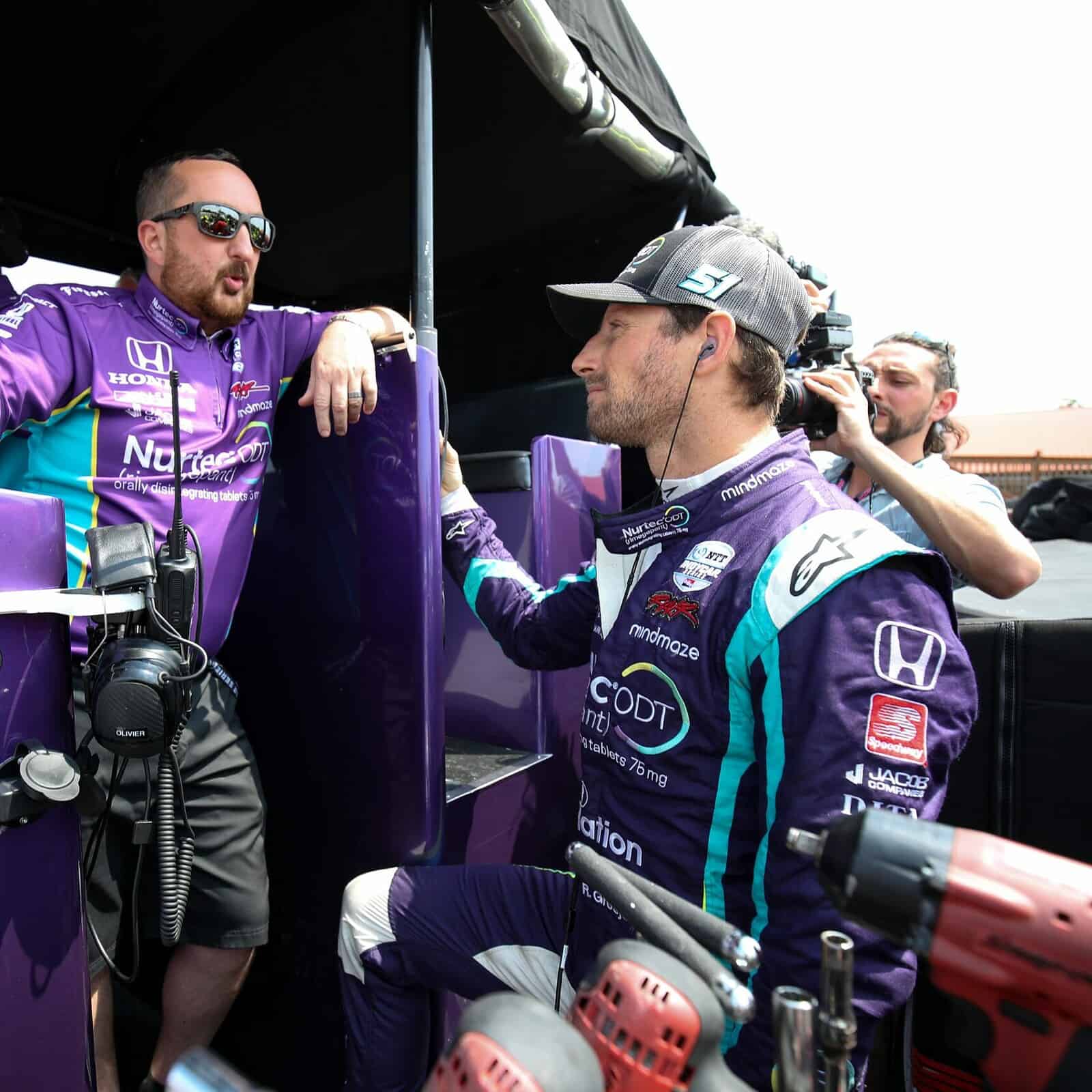 When the NTT IndyCar Series visits a new track for the first time, teams are usually able to test at the track in order to help their race engineers gather data to create a setup for the race weekend. However, when that venue is a street circuit, then it’s not exactly an easy proposition to get data for a car setup.

Such is the case for the Nashville street circuit ahead of Sunday’s (August 8th) Music City Grand Prix.

Simulators are probably the biggest tool an IndyCar race engineer can use in this scenario and the Honda simulator certainly was a help for Olivier Boisson in his effort to create the setup for Romain Grosjean’s No. 51 Dale Coyne Racing with Rick Ware Racing Honda.

Boisson has engineered many IndyCar drivers over the past decade, including EJ Viso, Tony Kanaan and Sebastien Bourdais at KV Racing before KV Racing shut down at the end of 2016. When Bourdais went to Dale Coyne Racing for 2017, Craig Hampson took over as Bourdais’s race engineer with Boisson in the background, but Boisson then engineered Santino Ferrucci in 2020 and is now Grosjean’s lead engineer this year. That relationship has bore fruit in Grosjean securing pole position at the GMR Grand Prix at the Indianapolis Motor Speedway road course en route to a second place finish.

Moving on to Nashville, this is a very unique street circuit with 11 turns squeezed into a 2.17 mile lap that the Indy cars will race 80 laps on. The track features a run over the Cumberland River on the Korean Veterans Memorial Bridge in both directions with long straights leading to corners at both sides of the track.

This is the circuit’s defining feature and it led to the race organizers deciding that the race will start as the cars are rolling northbound coming off the bridge leading to turn 9. The circuit’s finish line is just in front of Nissan Stadium where the Tennessee Titans play.

In both directions, the bridge brings to the street circuit a very interesting technical challenge. Drivers want to brake in a straight line to minimize their cars sliding around, however the ends of the stretch over the bridge has a right-handed curve leading into a sharp left-hand corner.

The lap around Nashville starts with a short run to a left-right chicane before a short straight to a right hander at turn 3. Then the cars will go southbound on the bridge across the river, curving to the right just after crossing the river before a 90 degree left at turn 4. Turn 5 is almost immediately after that with a quick right-left sequence before two tight left handers (turns 6 and 7) and a right hander at turn 8 leading back onto the northbound side of the bridge.

The turn 4-8 sequence are the slowest part of the track with mostly left handed corners, leading to a lot of wear on the right side tires.

“The corners are very slow in the back of the track,” said Boisson. “Traction’s going to be to a premium, being able to get out of the corner and put the power down, especially if it’s a bit bumpy.”

From a look at the track map and at Grosjean’s lap of the circuit in the Honda simulator, it would appear that the circuit is mostly second-gear corners with a first gear sequence of corners. Getting through those slower corners quickly helps, as that’s where a lot of time can be made up.

“I think overall it’s all going to be about traction,” Boisson said. “The mid-corner speeds are not going to be a huge thing, In general, on a street course because they are bumpy, it’s not really much about minimum speed, but it’s about how good your car is under braking, can you brake late, is it stable, and turns 4 and 9 are going to be interesting for that because they’re pretty quick.

During a street circuit weekend, the various support series will be laying down rubber that will make the track grippier. Unlike St. Petersburg or Toronto, the Nashville weekend will have two series racing with IndyCar that don’t normally race with the series. The SRO GT World Challenge America series and Trans Am will be partnering IndyCar and both series race on Pirelli tires, compared to IndyCar on Firestone.

This creates an interesting challenge for IndyCar engineers because normally the Road to Indy and their Cooper rubber are a familiar compound for engineers to prepare for. However, Pirelli rubber will be a bit different, especially with the different compounds that are used between Trans Am and SRO.

The Music City Grand Prix will start at 5:30 p.m. ET. The race will air on NBCSN.

Here is Grosjean taking a lap of the Nashville street circuit on the Honda HPD Simulator: