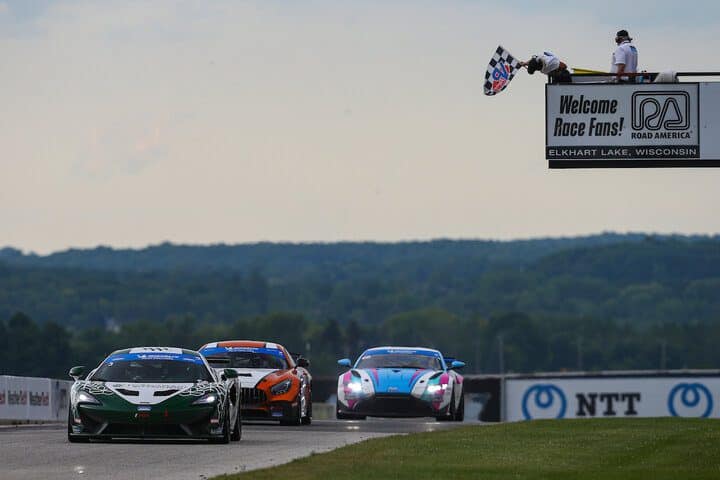 For Saturday’s seventh of the year for IMSA Michelin Pilot Challenge at Road America, there are currently 37 teams entered.  This is an increase of two teams from Lime Rock.  Motorsports In Action’s Sheena Monk will be looking to defend her victory from last year.

In the Grand Sport class, there are 24 cars entered.  CB Motorsports, which has run all six races to this point in the TCR class, has chosen to leave their Hyundai Veloster N TCR at home this weekend.  Instead, they have entered a Mercedes-AMG GT4 for regular drivers Trenton Estep and Mark Kvamme.  This will be the team’s first-ever start in GT4 competition.

Blackdog Speed Shop is back this weekend for their second race of the year.  Team owner Tony Gaples will be in the car this time alongside Michael Cooper.  Gaples was supposed to drive at Watkins Glen as well, but pulled out prior to the start of the weekend.  Spencer Pumpelly drove in his place.  Pirelli GT4 America SprintX regulars Capstone Motorsports are back with their Alabama Crimson Tide-themed Mercedes for Gary Ferrara and Kris Wilson as well.

At Murillo Racing, Kenny Murillo is back in the No. 65 in place of Tim Probert, who qualified a strong sixth at Lime Rock.  Javier Quiros returns to the Riley Motorsports Supra in place of Sacha Fenestraz.  CarBahn Motorsports with Peregrine Racing has swapped one Siegel for another.  Nolan Siegel will sit this weekend’s action out in favor of his father Mark.

In addition, Automatic Racing has entered their No. 99 Aston Martin.  Regular driver Dr. Ramin Abdolvahabi has been joined by Michael de Quesada, normally of Alegra Motorsports in the IMSA WeatherTech SportsCar Championship.  However, Alegra Motorsports has not raced since the Sahlen’s Six Hours at the Glen amid funding issues.

The TCR class is down to 13 entries this weekend, the lowest of the season.  The only change here is the absence of the No. 81 Hyundai, with the reasoning noted above.