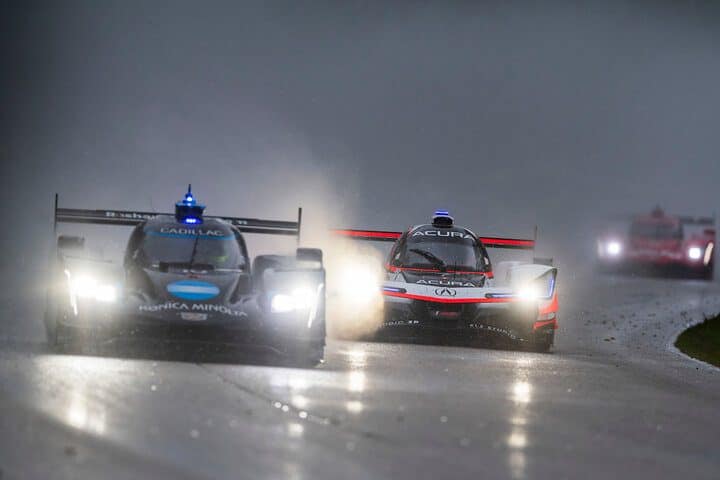 The IMSA WeatherTech SportsCar Championship will be back in action Sunday at Road America with all five classes for the first time since Watkins Glen just before the 4th of July weekend.  There will be 35 teams out on track doing battle Sunday afternoon.  There is a chance of scattered thunderstorms on Sunday, so the race could look a little like the picture above once again.

In the DPi class, there will be the six full-time teams doing battle.  They comprise three Cadillacs (one each from Chip Ganassi Racing, JDC-Miller MotorSports and Action Express Racing), two Acuras from Wayne Taylor Racing and Meyer Shank Racing with Curb-Agajanian, and the Mazda Motorsports RT24-P.  There are no driver changes in the class.

The LMP2 class has four entries, up from three at Watkins Glen in the WeatherTech 240.  The addition is the No. 18 ORECA 07-Gibson from Era Motorsport.  However, there is a driver change here as team owner Kyle Tilley will not be on-site this weekend.  Ryan Dalziel, who normally competes in only the endurance events, has been drafted in to team with Dwight Merriman as Tilley does double-duty at Watkins Glen in the NASCAR Cup and Xfinity Series.

There will be seven LMP3 entries, up from six at Daytona.  Dawson Racing (also known as D3+Transformers Racing) is not entered.

The additional strength in numbers comes from two IMSA Prototype Challenge teams posting entries.  One is JrIII Racing, which will field the No. 30 Ligier JS P320-Nissan for Terry Olson and Mike Skeen.  Skeen has 15 previous starts in the IMSA WeatherTech SportsCar Championship, but they’ve all come in the GT Daytona class.  His best finish has been seventh in class on two different occasions.  Olson will be making his WeatherTech SportsCar Championship debut.  He is currently racing in both IMSA Prototype Challenge and Lamborghini Super Trofeo North America.

The other new entry is Wulver Racing, who is fielding an entry for Tonis Kasemets and Augie Pabst.  Kasemets is a Estonian racer who has competed since 2018 in Prototype Challenge.  He has not started a WeatherTech race since 2014, but has been in and around sports cars in North America for the last decade.  Pabst will be making his series debut.

Of the five teams that raced in Watkins Glen, the only change is with Performance Tech Motorsports.  Dan Goldburg is back in the No. 38, replacing Mateo Llarena.

GT Le Mans has the same three teams entered.  The only change here is that Matt Campbell will be back in the No. 79 Porsche, replacing Mathieu Jaminet.

GT Daytona has 15 entries, up two from Lime Rock.  Gilbert/Korthoff Racing is back with their Mercedes after skipping Lime Rock.  The due of Guy Cosmo and Shane Lewis finished seventh on debut at Watkins Glen.  NTe Sport is also back for the first time since the Sahlen’s Six Hours at the Glen in June.  There, the team scored a fourth-place finish.  This weekend, INDYCAR veteran JR Hildebrand will team up with Don Yount.

The remaining 13 teams that were entered at Lime Rock return with unchanged driver lineups.  However, a couple of drivers will be very sore this weekend.  PFAFF Motorsports’ Laurens Vanthoor has been cleared to race this weekend after he was hit in the paddock during last weekend’s TotalEnergies 24 Hours of Spa.  Vanthoor suffered a broken nose, which forced him to miss part of the race.

On my way back to the paddock I got hit by a quad while riding my step. I landed heavily on my head and have multiple wounds in my face. I’m doing fine but currently at the hospital for further checks and stitches.

Meanwhile, GRT Grasser Racing Team’s Franck Perera is sore for a different reason.  He was caught up in the huge crash in the first hour at Spa Saturday where he (driving the No. 163 Lamborghini in the preview picture below) ran unsighted into teammate Jack Aitken at near unabated speed in the Radillion corner.