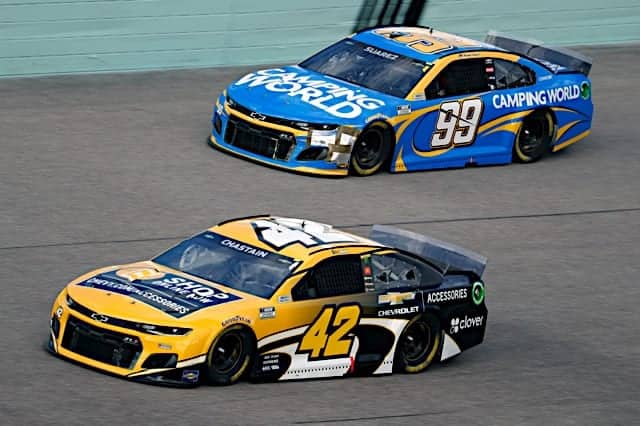 Ross Chastain has bounced around NASCAR’s top three series for the past decade.

Finally, though, the 28-year-old watermelon farmer has found a home in the NASCAR Cup Series for at least the next two years.

Trackhouse Racing Team announced Tuesday (Aug. 3) Chastain will pilot the team’s newly-acquired No. 1 Chevrolet in 2022 after signing a multi-year deal, the first of Chastain’s career.

The deal comes just over a month after Trackhouse owner Justin Marks purchased the assets of Chip Ganassi Racing, including the charters of cars currently driven by Chastain and Kurt Busch.

For a moment, Chastain’s future in NASCAR seemed questionable all over again — far from a surprise if you’ve been paying attention to the Camping World Truck and Xfinity series throughout the past five years.

Chastain made his first national series start in the 2011 Camping World Truck Series race at Indianapolis Raceway Park (now Lucas Oil Raceway) in Stacy Compton’s No. 66 Chevrolet. In order to make that start, by the way, he bought a seat from none other than Marks, who drove the truck one race prior. That night, the then-18-year-old notched a 10th-place finish in his debut before competing four more times that season.

Fast forward through part-time rides and three years of overperforming at JD Motorsports in the NASCAR Xfinity Series, Chastain eventually earned the shot of a lifetime to pilot the No. 42 Chevrolet for Chip Ganassi Racing in Xfinity for three races in the fall of 2018.

After a marvelous debut at Darlington Raceway that resulted in a crash while battling Kevin Harvick for the lead, Chastain capitalized at CGR with a win at Las Vegas Motor Speedway that finally put him on the map.

In fact, Chastain had signed a deal to become Ganassi’s full-time Xfinity driver in 2019, finally allowing him to compete for wins on a regular basis.

That opportunity never came, though.

Leaders at Ganassi’s primary sponsor, DC Solar, were raided by the FBI and the company was quickly shut down, eliminating Chastain’s funding for the year.

The aftermath resulted in part-time Xfinity rides until he quickly found success in the Truck Series for Niece Motorsports. Three wins and a Championship 4 run there guided Chastain to a full-time Xfinity ride in 2020 with Kaulig Racing, which eventually springboarded him to the NASCAR Cup Series with Ganassi in the vacant No. 42 car for the 2021 season.

That brings us back to late June, when CGR was sold to Marks’ Trackhouse Racing. Chastain was in the midst of a tire test when he heard the news and sat shortly after to contemplate what was next.

Now, his immediate future in the NASCAR Cup Series is secure.

“I’ve been fired and I’ve left teams and I’ve done a lot of things and I could do a lot of things better,” Chastain said Tuesday. “But to bring it full circle with somebody I’ve known my entire time in this sport, and do it with this group, and I mean this when I say it, truly feels like it’s more than just another team. And I think that’s what made this process of getting me in this car so much easier for both sides.”

Confirmed to be in the car for 2023 is a feeling Chastain is still getting used to, even during the press conference.

“It’s indescribable,” he said. “It is a relief. But it’s really been since we knew this was going to happen, a pretty short time ago, maybe it changes now that it’s public and everybody knows, but it’s really been like okay, now it’s like taking a breath. But I can’t change how I do things. This is what got me here. I just don’t have to go take everything I don’t have to take in.

“So that’s what I’ve been trying to work on this year is just a different mentality on my race craft and what goes through my head, both pre-race and also during the race.”

Marks knew how much the opportunity meant to Chastain. The pairing — from its start at the sale of a racing seat — is one that makes sense in every sense.

“When he first came on the scene, [he was] knocking on our front door with a couple $20 bills to buy a used race seat from me,” Marks said. “And for us both, not just him but for us both to be at this point right now, with the way our career trajectories have gone since then, some 10 years ago, is pretty amazing.”

Marks’ team, co-owned by international music star Pitbull, has burst onto the scene in an astounding way in 2021. Its debut season has been led by Daniel Suarez in the No. 99 Chevrolet. Partnered with Richard Childress Racing for this season, Suarez has one top five (fourth, Bristol Motor Speedway dirt), three top-10s and sits 22nd in points.

Hopes for Trackhouse’s future are high, and the signing of Chastain signifies an added aggressiveness to the team’s brand identity as the organization adds its second driver in 2022.

“I’m a huge fan of people that have had to work hard against adversity and against odds to try to get where they have gotten in their careers,” Marks said. “And I think it’s that fight in those years of working hard toward something when it’s very difficult along the way that pays dividends at the Cup level, especially late in races when you’re sitting in good equipment.”

Chastain has found that edge and produced strong runs in the No. 42 car this season, posting a fourth-place finish at Circuit of the Americas in May as well as a runner-up finish at Nashville Superspeedway in June.

The goal is for that drive to continue heading into a brand-new situation as the sport transitions to the Next Gen car in 2022.

“I think having some job security and being able to put a contract in front of him that’s a multi-year contract is going to let him exhale a little bit after fighting for his life for 10 years and say, ‘this is my home and I’m ready to get to work,’” Marks said. “And that was an important part for Trackhouse.”

Most likely. I’m looking for him being announced as the driver of the #32 23XI 2nd entry as the next Silly Season shoe to drop.