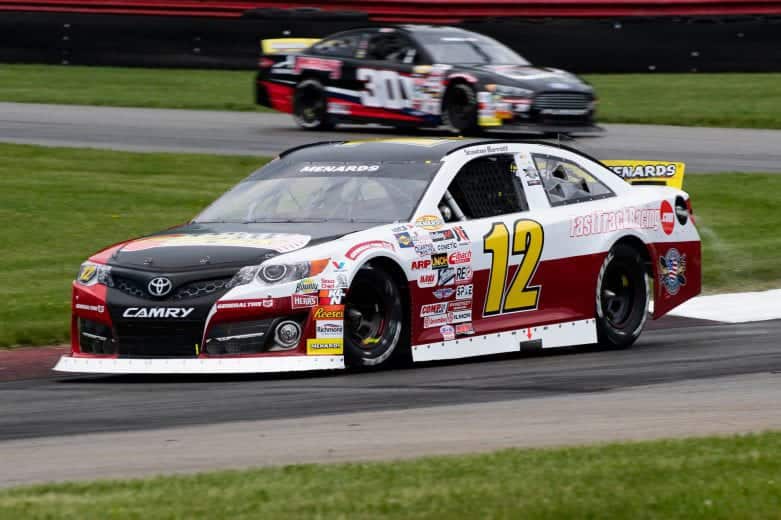 You know that Ty Gibbs vs. Corey Heim rivalry? Yeah, it intensified in the most recent ARCA Menards Series race at Winchester Speedway. After racing at a short track, now these two get to duel with 28 other competitors making left and right turns at Watkins Glen International. The Clean Harbors 100 will be the second-ever race there for ARCA, as Watkins Glen hosted the former K&N Pro Series East 26 times, most recently in 2019.

After Gibbs dominated at Iowa Speedway, Heim responded by leading 175 laps at Winchester. Only on lap 198, as Heim attempted to pass fifth-place Thad Moffitt, who was still on the lead lap, the domino effect led to Heim spinning from the lead after contact from Gibbs, and Gibbs winning for the seventh time this season. The rivalry between these two teenage Toyota prospects has reached a new level entering the 13th race of the ARCA season.

Gibbs has become a talented road course racer. He won his NASCAR Xfinity Series debut at the Daytona road course, then followed it up with a win in the other ARCA road course race this season at Mid-Ohio Sports Car Course. He also has competed once at Watkins Glen in the 2019 K&N East race. He started fourth and finished third. As the points leader, Gibbs has a prime opportunity to further increase his seven-point lead.

Gibbs will be one of 14 pulling double duty this weekend at Watkins Glen. Yes, nearly half of the field will use the Clean Harbors 100 as preparation for another race. Those drivers are Gibbs, Heim, Tyler Ankrum, Chase Briscoe, Taylor Gray, Riley Herbst, Austin Hill, Carson Hocevar, Brandon Jones, Sam Mayer, Chase Purdy, Austin Wayne Self, Jack Wood and Kris Wright.

Heim meanwhile will make his first start at Watkins Glen, then make his second career NASCAR Camping World Truck Series start the following day. Heim made his first road course start at Mid-Ohio earlier this year. He won the pole and led three laps but jumped a restart, then sped on pit road, ultimately relegating him to a seventh-place finish. He is anxious to get to Watkins Glen, saying his rivalry with Gibbs amped up following the incident at Winchester.

Gibbs and Heim made headlines at Winchester, but Gray also caused a hard wreck there after racing against Daniel Dye. Gray’s driving in that race is under review, ARCA Communications Manager Charlie Krall confirmed. Gray already was under probation for an incident in the ARCA preseason test at Daytona International Speedway. After the Winchester race, Gray tweeted an apology.

I made a mistake last night. I don’t intentionally wreck people. I just misjudged the call. I don’t race like that and I hate that I wrecked there stuff. On to @WGI

Gray will also make his first start at Watkins Glen in the ARCA race. It will be his sixth start this year, and he has finished in the top 10 in all five races thus far. He will follow up his ARCA race with his Truck Series debut with David Gilliland Racing. He will start 32nd in that race.

Although Gibbs, Heim and Grayall seek to win the Clean Harbors 100, there are several other drivers who could win.

Chief among them is 2016 ARCA champion Briscoe. Yes, the NASCAR Cup Series rookie has won twice on road courses in his Xfinity Series career. Moreover, Briscoe won the ARCA Menards Series West race at Sonoma Raceway earlier this year. With his Cup Series crew chief John Klausmeier atop his ARCA pit box, expect Briscoe to contend for the victory.

Wright earned his first professional racing win at Watkins Glen. Wright had arguably one of the fastest cars in the ARCA race at Mid-Ohio, but an early spin forced him off the lead lap and he never recovered, instead finishing one lap down in eighth. After an eighth-place finish at Winchester, Wright is seeking his career-best finish, telling Frontstretch, “I think the ARCA race will be a top five, top three, hopefully, a win.”

The Clean Harbors 100 will also see the return of Hill and Jones. Both drivers competed in the ARCA race at Mid-Ohio. Hill finished second and Jones finished fourth. For these two, it is another opportunity to educate themselves on racing at Watkins Glen. Hill will make his Watkins Glen debut this weekend. The Truck Series winner at Knoxville Raceway, Hill will start the Truck Series regular-season finale in the first place.

Jones will make his fifth Xfinity Series start at Watkins Glen. In four starts there, he has one top 10, a seventh-place finish in the 2018 race. Still searching for his first Xfinity Series win this season, Jones will start the race in 21st place. Jones will pilot the No. 25 Venturini Motorsports Toyota in the Clean Harbors 100.

Welcome back, Herbst. Herbst is wisely using this race in preparation for his Xfinity race, where he is below the playoff cut line by only eight points.

Really smart move by Herbst to try and get more track time. 32 points out of the Xfinity playoffs, could use all the extra practice he can get. https://t.co/FXhYOLxF3G

Herbst has six top-five finishes at road courses scattered throughout his career.

The Clean Harbors 100 will be his first ARCA start since the penultimate 2019 race. In 15 career ARCA starts, Hocevar has six top fives, with a career-best finish of third at Salem Speedway in 2019, and 12 top 10s.

Pulling double duty this weekend at Watkins Glen with @NieceMotorsport! Be first time back in an @ARCA_Racing car sense 2019, glad to be able to get laps before the truck race! pic.twitter.com/KZ9XVaCAwS

Prior to the race, there will be a combined 45-minute practice and qualifying session. The Clean Harbors 100 will begin at 6 p.m. ET Friday with TV coverage provided by FS1.

Don’t forget Dale Quarterley who is making an ARCA return in the Willie Mullins #3. Quarterley has won multiple times in full fendered cars on road courses and also has a tour modified win on a road course.