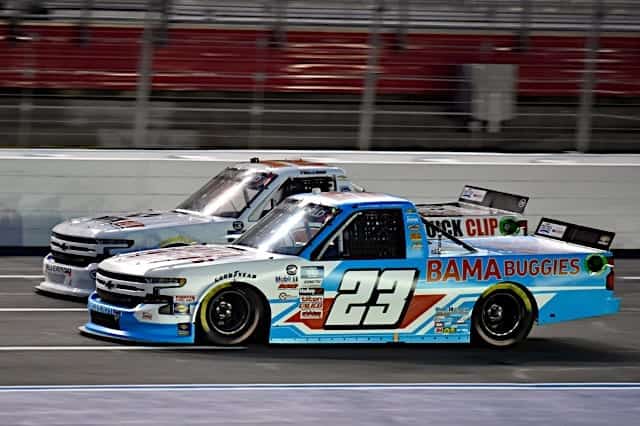 AJ Allmendinger will replace Purdy in the No. 23 Chevrolet. He will have to drop from Purdy’s slated 25th starting spot to the rear of the field for the race.

As a result of the driver change and the Watkins Glen event being the last one of the Truck Series regular season, Purdy will not make the playoffs in his rookie campaign.

“Late yesterday afternoon [Aug. 4], GMS Racing driver Chase Purdy tested positive for COVID-19 with mild symptoms,” a team spokesperson said in a statement. “In accordance with NASCAR protocol and the CDC guidelines, Purdy will not compete in Saturday’s NASCAR Camping World Truck Series event at Watkins Glen International. AJ Allmendinger has agreed to substitute as the replacement driver of the No. 23 Bama Buggies Chevrolet. We wish Chase a speedy recovery and hope to see him compete at the series’ next event at World Wide Technology Raceway at Gateway.”

Purdy also was slated to compete in the ARCA Menards Series race at Watkins Glen. No word on whether the No. 63 will still run but with a different driver.

In his first full-time season in the Truck Series, Purdy is 19th in points. Overall, he has one top-10 finish in 23 career starts, his best finish 10th in the 10th race of the 2020 season at Kansas Speedway.

Fast forward to 2025. So and so tests positive for covid. Is feeling fine but must quarantine for a month. When will this ever stop? Covid will never be gone. It’s here to stay.

Well if you have to have a substitute at a road course, you could do a lot worse than Allmendinger