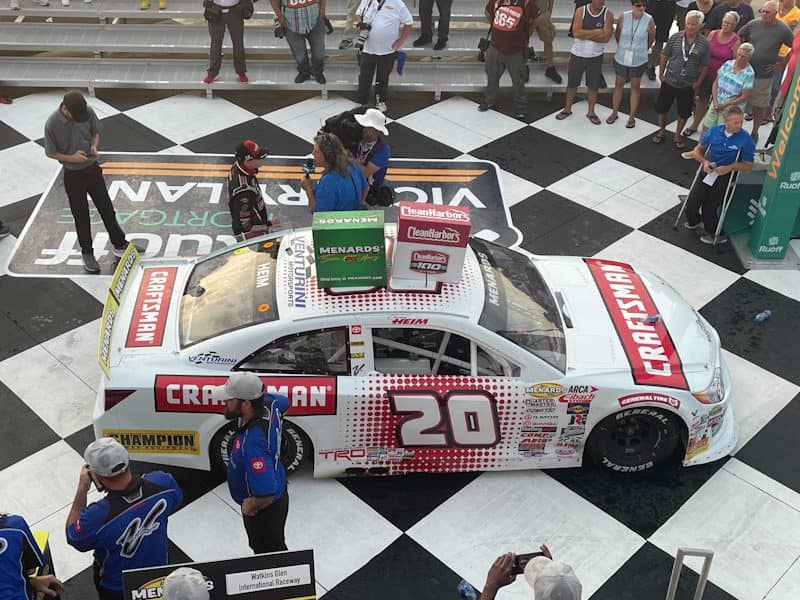 After he was spun from the lead by Ty Gibbs in the most recent ARCA Menards Series race, Corey Heim passed Gibbs, took advantage of mechanical issues for Chase Briscoe, and won the Clean Harbors 100 at Watkins Glen International. It’s his fifth win of this season and sixth of his career.

For Heim, it’s redemption as he lost the points lead after Gibbs won back-to-back races at Iowa Speedway and Winchester Speedway, respectively.

“Just everything we possibly could bring to the race track we brought today,” Heim told FS1 in victory lane. “This Venturini Motorsports team has battled back from a lot this year and I’m really proud of them.”

While his rivalry with Gibbs amplified following their run-in at Winchester, Heim responded with a win.

“He’s just another car on the racetrack, and I was trying to get the lead so race him hard, race him clean, and he did too, so happy to bring home the win today,” he continued.

“Learned a lot, really,” he concluded. “I started off the race a little off. I think the car was really good and we made a couple changes to my liking. We got right where we wanted it and I think we’re going to haul a** tomorrow.”

Making his second start of this season, both at the two road courses, the most recent NASCAR Camping World Truck Series winner Austin Hill finished second. Hill will start the Truck Series race tomorrow from the pole.

“Our Toyota seemed like it took too long to get going,” Hill told FS1 after finishing second in both ARCA road course races this season. “We wanted to fire off and save our stuff a little bit, but whenever I wanted to go, I wanted to fire off five laps sooner than it did. I was hoping for some cautions. There were a few guys that turned, spun out, and everything else. It seemed like we were going to get one and I would at least have a chance at it.”

This Truck Series race at Watkins Glen is its regular-season finale and Hill will take what he learned from his ARCA performance.

After winning the pole, Gibbs finished third. He unofficially leads Heim by two points in the standings. Disappointed, he merely told FS1, “Congratulations to the 20 group. We missed it today and we’ll keep hammering down.”

Truck Series rookie Carson Hocevar finished fourth in his first ARCA start since the penultimate race of the 2019 season. He told FS1 that his Niece Motorsports team acquired this No. 50 Chevrolet only six days before the race. What he enjoyed most was the ability to run up front. Currently 61 points above the playoff cut line, Hocevar told FS1 that while road course racing may not be his forte, “I’m still not comfortable but hopefully comfortable for here.”

Riley Herbst finished sixth after starting at the tail end of the field for an engine change prior to the race.

Briscoe won the ARCA Menards Series West race at Sonoma Raceway earlier this year, and he passed Gibbs for the lead after starting seventh. However, with 17 laps to go, he pulled his No. 14 onto pit road, and his bid for victory was over. Ultimately, he finished with a DNF in 23rd place.

In this 29 car field, 13 drivers are completing double duty at Watkins Glen. Several of them, including Kris Wright, Drew Dollar, and Tyler Ankrum, struggled to corral their cars and subsequently lost valuable positions.

The two most notable incidents were a spin from Sam Mayer, who is the lone driver running triple duty this race weekend.

The race stayed green, and Mayer wound up one lap down in 14th place.

Shortly before the scheduled break at lap 21, Dale Quarterly wrecked hard after contact from Dollar.

Heading into the 13th race of this ARCA season, it had been all Gibbs and Heim, combining to win all but one race. For one Friday night, anyway, it was redemption for Heim.

ARCA will next make its second trip to the state of Michigan. Michigan International Speedway will host the series for the Henry Ford Health Systems 200 on Friday, Aug. 20. The race will begin at 6 p.m. ET with TV coverage provided by MAVTV and available on TrackPass on NBC Sports Gold.