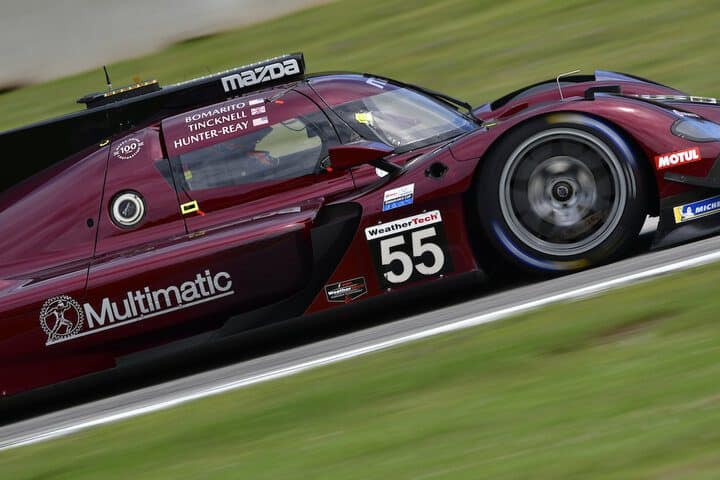 Mazda Motorsports’ Harry Tincknell was fastest overall in an abbreviated practice session Friday (Aug. 6) held in changeable conditions at Road America.  Due to the wet conditions, Tincknell’s lap at 112.298 mph was nearly 20 seconds off of the expected pace had the session been held in the dry.

IMSA WeatherTech SportsCar Championship practice Friday (Aug. 6) at Road America was scheduled to begin at 5:10 p.m. local time and last for an hour.  That was until thunderstorms descended upon the 4.048-mile road course.  A long stopdown due to lightning jumbled up the schedule.  As a result, 60 minutes of practice was pushed back 50 minutes and cut to 30 minutes.

LMP3 was topped by Andretti Autosport’s Oliver Askew with a lap at 103.718 mph, ninth overall.  Askew’s lap was seven-eighths of a second faster than Riley Motorsports’ Dylan Murry.  CORE autosport’s Jon Bennett was third, then Rasmus Lindh and Gar Robinson.

Robinson’s teammate Felipe Fraga ran into trouble early in the session, sliding off-course at Canada Corner and drawing the session’s only red flag.  The No. 74 Ligier JS P320-Nissan was not damaged significantly and was able to return to the track.  Robinson posted his best lap in the car after Fraga’s incident.

PFAFF Motorsports’ Laurens Vanthoor shook off the pain from the broken nose he suffered last weekend at Spa to go fastest in GT Daytona with a lap at 102.570 mph.  The lap, which was 11th overall, was two seconds faster than CarBahn Motorsports with Peregrine Racing’s Jeff Westphal.  NTe Sport’s JR Hildebrand was third fastest, then GRT Grasser Racing Team’s Franck Perera.  Vasser Sullivan’s Zach Veach was fifth in his Lexus.

Five teams chose not to venture out onto the wet road course.  The most notable of the bunch was Action Express Racing’s Cadillac DPi-V.R. shared by Pipo Derani and Felipe Nasr.  The Heart of Racing’s Aston Martin did not practice, along with the new efforts from JrIII Racing, Gilbert/Korthoff Motorsports and Wulver Racing.

WeatherTech teams have another practice session scheduled for 9:55 a.m. ET Saturday morning.  The forecast for practice looks just fine, but there is another chance of thunderstorms Saturday afternoon.