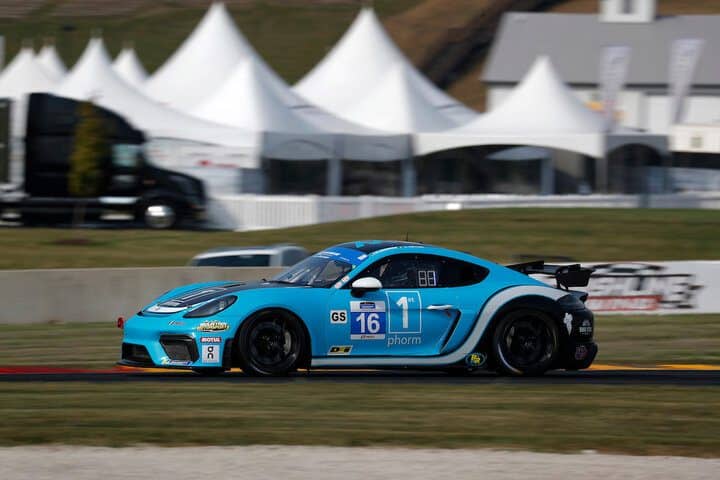 In the first practice of the day, held at 8:45 a.m. local time, the track was very quick with the cool weather.  As a result, everyone went out as quick as they could.  In the first eight minutes of the session, seven different drivers reset the quick time as they got up to speed.

Heylen turned in the best lap of the session just 10 minutes in.  The rest of the session saw everyone try to knock Heylen off the top of the chart, but they were unable to do so.

Heylen’s lap was one-sixth of a second faster than the BMW of Turner Motorsport’s Robby Foley.  Scott Andrews was third fastest in his Supra for Riley Motorsports, while Bill Auberlen was fourth in the second Turner BMW.  Trenton Estep was fifth fastest in his very first Grand Sport practice session with CB Motorsports.

In TCR, the Alfa Romeo Giuletta Veloce TCR is the fastest car in a straight line.  As a result, the long flat-out stretches at Road America are a good thing for the Italian car.  KMW Motorsports with TMR Engineering’s Tim Lewis Jr. was fastest in class at 103.455 mph, good for 23rd overall.

Lewis’ lap was two-hundredths of a second faster than Copeland Motorsports’ Tyler Gonzalez.  Atlanta Speedwerks’ Ryan Eversley was third in his Honda, then Mark Wilkins in the Hyundai Elantra.  Roadshagger Racing’s Jon Morley was fifth fastest.

36 of the 37 teams on-site turned in laps during the opening practice session.  The sole holdout was Andrew Wojteczko Autosport’s No. 13 McLaren for Kuno Wittmer and Orey Fidani.

In the afternoon session, things weren’t quite as quick.  Murillo Racing’s Kenny Murillo was fastest overall with a lap at 105.891 mph, nearly a full second slower than Heylen in the morning.  Murillo’s lap was one-eighth of a second faster than Auberlen.  Notlad Racing by RS1’s Patrick Gallagher, who won the pole at Lime Rock a couple of weeks ago, was third quickest.  Heylen and Andrews rounded out the top 5.

Estep was sixth, then Foley and Foss.  McCann Racing’s Michael McCann Jr. was ninth quickest in his Audi, while Ward was 10th.

In TCR, Bryan Herta Autosport’s Ryan Norman was quickest in his Hyundai Elantra N TCR with a lap at 103.656 mph, the quickest TCR lap of the day and 22nd overall.  Norman’s lap was nearly six-tenths of a second faster than the Honda Civic Type-R TCR of VGMC Racing’s Karl Wittmer.  Eversley was third quickest once again, followed by Harry Gottsacker and Van der Steur Racing’s Denis Dupont in the fastest of the Hyundai Veloster N TCRs.

The session had two red flags.  The first red came out in the first few minutes when Atlanta Speedwerks’ Brian Henderson spun off at Canada Corner.  As a result, the No. 84 Honda was unable to set a time in the session.  Later on, Roadshagger Racing’s Gavin Ernstone spun off at turn 14 to draw the second red flag.  Both of the stoppages lasted roughly 10 minutes.

In addition to Atlanta Speedwerks’ No. 84, two other teams failed to set a time in the session.  They were Motorsports In Action’s No. 3 McLaren for Sheena Monk and Spencer Pigot and the Lime Rock winning Veloster of Michael Lewis and Taylor Hagler.

Qualifying for the Road America 120 is scheduled for 9 a.m. ET Saturday morning (8 a.m. local time).  We’ll have a recap of the session here at Frontstretch.