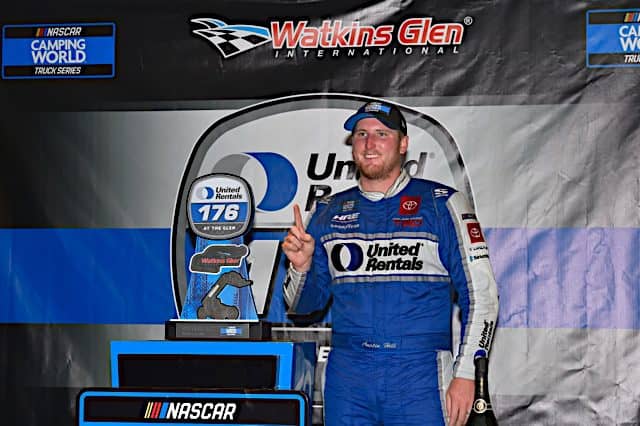 With three playoff spots on the line, the NASCAR Camping World Truck Series took to Watkins Glen after a two-week break to determine the grid for the playoffs. Austin Hill came home with his second win of the season when the race was called with 11 laps to go due to lightning in the area.

There was plenty of intrigue before the inclement weather arrived. Turn one right from the green flag was calamity corner, as John Hunter Nemechek turned Ben Rhodes, causing a pile-up of drivers trying to make their way through. Hill and Todd Gilliland battled for the lead early, trading positions as Gilliand was able to capture the first stage win. Hill bounced back to secure the stage 2 win, in which he held a 2.2-second lead over Nemechek. During stage 3, Hill was out front again, and the trucks were brought down pit road with 11 to go due to storms in the area. After waiting a bit, NASCAR called the race, giving Hill his second victory of 2021.

Hill had always wanted to win on a road course, as he stated

He went on to say, “I always felt I got around the road courses fairly decent, finally, we had a race that does everything that we needed to do.”

When the rain came in, he began to realize this desire was possibly in his hands.

“I was biting my nails a little bit when that rain came and what was going to happen with the lightning and all that. I had a really nice piece today and we were able to go out there and get it done. It’s really special to get a win at Watkins Glen.”

Other notable stories during the race included road course ace A.J. Allmendinger substituting for Chase Purdy, while mid-race there was a driver swap between Bobby Reuse, who was feeling ill, and his car owner Jordan Anderson.

Nemechek held on for second place, with Sheldon Creed in third. The top 5 was rounded off by Gilliland in fourth and Parker Kligerman finishing a great run in fifth. The sixth and seventh places went to Zane Smith and Tyler Ankrum, respectively, with veteran Paul Menard, Sam Mayer and Carson Hocevar.

The Truck Series playoffs are now set, with Chandler Smith and Stewart Friesen making the cut after being on the bubble. The only way those two drivers were not going to make it was for someone outside the top 10 in points heading into Watkins Glen emerging with a victory. Nemechek is the points leader going into the playoffs after securing the regular-season title, with Hill in second, Rhodes in third, Gilliland fourth and reigning champion Creed rounded out the top five. Also making the playoffs are Zane Smith in sixth and veteran Matt Crafton in seventh, followed by Hocevar, Chandler Smith and Friesen.