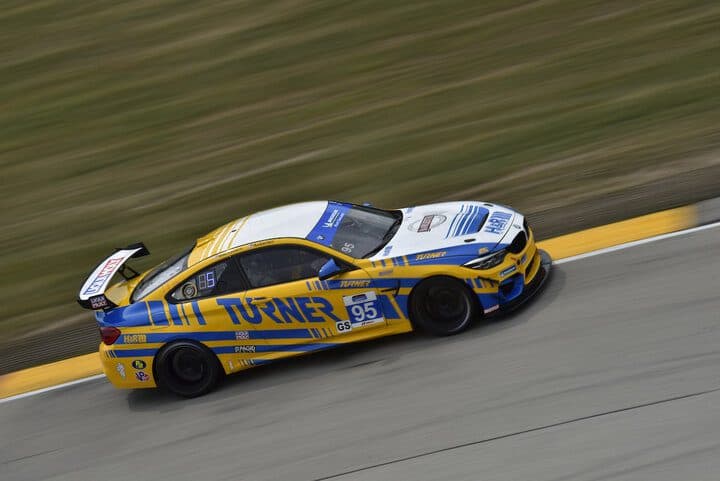 Turner Motorsport’s Dillon Machavern won the pole Saturday morning (Aug. 7) for the Road America 120 with a lap at 106.459 mph.  It is his second pole of the 2021 season after he earned it at Watkins Glen last month.

Most of the session ended up being a back and forth affair between Machavern and Notlad Racing with RS1’s Patrick Gallagher, who won the pole at Lime Rock.  The two traded quick times while running nearly nose-to-tail on the track.  When Gallagher would improve, Machavern would be right there.

With five minutes to go, Machavern turned in his best lap of the session.  Gallagher attempted to improve on that, but ran wide in turn 1.  That triggered a track limits violation that invalidated his lap.

Machavern ended up five-hundredths of a second ahead of Gallagher’s Aston Martin.  Wright Motorsports’ Ryan Hardwick will start third in the sole Porsche in the field.  HTP Winward Motorsport’s Russell Ward will start fourth, while the Chevrolet Camaro GT4.R of TeamTGM’s Hugh Plumb rounded out the top five.

In TCR, Bryan Herta Autosport’s Ryan Norman and JDC-Miller MotorSports’ Chris Miller traded quick times during the session.  With two minutes remaining in the session, Norman set a lap at 104.022 mph, which held up to give him the class pole in his Hyundai Elantra N TCR.

Norman’s lap, which was 18th overall, was four-tenths of a second faster than Miller.  Atlanta Speedwerks’ Brian Henderson recovered from issues on Friday to qualify third, followed by KMW Motorsports with TMR Engineering’s Roy Block in the Alfa Romeo.  Harry Gottsacker starts fifth in the second Elantra.

All 37 cars got out on track, but Copeland Motorsports’ AJ Muss did not set a time.  Early in the session, Muss went off at turn 5 on his first lap at speed.  He was able to drive the car back around, but chose to pit and not turn in a lap.  He will start the race at the rear of the field.

The Road America 120 is scheduled to go green at 5:35 p.m. ET Saturday.  The race will be streamed live on NBC Sports’ TrackPass.