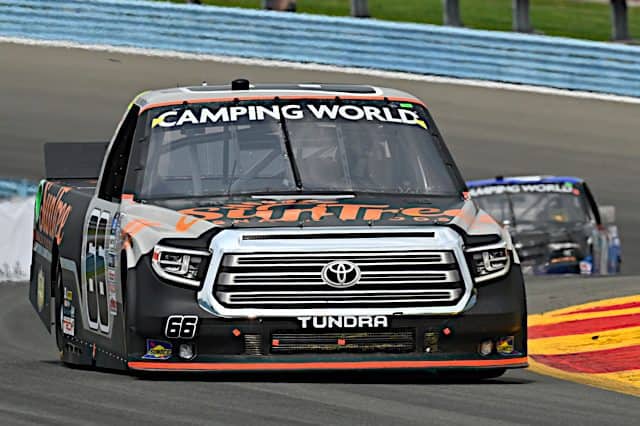 Paul Menard is rarely seen at NASCAR racetracks these days.

He proved, however, that his road-racing abilities are just as sharp as ever, wheeling the No. 66 Toyota for ThorSport Racing to an eighth-place finish in the rain-shortened NASCAR Camping World Truck Series race at Watkins Glen International on Saturday afternoon (Aug. 7).

This wasn’t Menard’s first appearance in the Truck Series this season, it came after piloting the No. 66 truck to an 11th-place run at Circuit of the Americas in May.

Menard, though, holds Watkins Glen in high regard and knew this was another race he wanted to put on his calendar.

“It was fun,” Menard said. “This is one of the greatest racetracks in North America. Iconic. There’s been a lot of series that have run here over the years, way more than just NASCAR. Formula One’s run here, IndyCar, IMSA, so it’s a track that you always want to come back to and I love road racing.”

Menard, 41, hadn’t competed in NASCAR’s top three touring series since 2019, prior to May’s race, though. To post a top-10 run — particularly after some adversity — made Saturday a satisfying effort after starting 39th of 40 trucks.

“Had a lot of trucks to pass and I feel like we passed a lot today,” Menard said. “Struggled a little bit on some pit stops, had a brake overheating early on and got that fixed and felt like we were a top-five truck.”

Menard is no stranger to the aggression in this series. That meant being patient on restarts, a strategy that heavily worked into Menard’s favor.

“The kids get crazy sometimes, so tried to be smart, keep the fenders on and I feel like our fenders are in pretty good shape relative to the field,” he said. “I would’ve liked to have another restart. We were pretty good on them just kind of laying back and letting them do their stuff and try to get by them.”

While his truck looked relatively clean, that didn’t mean he came back unscathed.

“I got body slammed a few times and then I realized how tough — I didn’t know how tight the fenders were […],” Menard said. “A Cup car, a little bit of a fender bump really makes a big rub. These, you can lay into them pretty hard and I understood that after a couple of times I got body slammed, so then it was kind of game on which was cool.”

Menard doesn’t keep in constant contact with many drivers but said he does hang out with drivers like teammates Matt Crafton and Johnny Sauter. He also spoke with Sam Mayer Saturday morning and said he hit it off with the young Wisconsin up-and-comer.

Menard doesn’t have any other races ahead this year at this time, he said. A top-10 run seems like a good note on which to end his part-time season.

He name was not mentioned during the broadcast. Maybe once during a run down of the field.