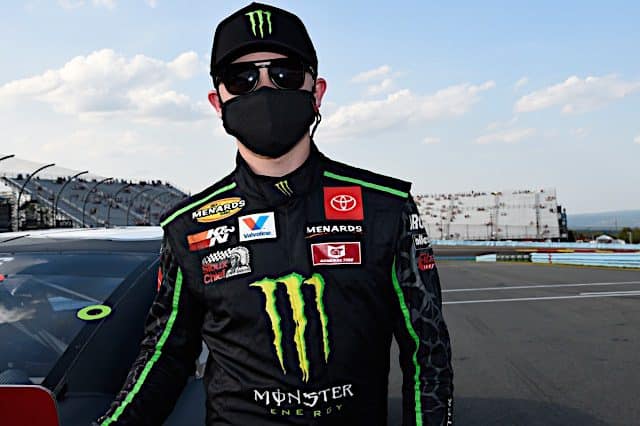 Ty Gibbs and Corey Heim have created the rivalry to watch this year in the ARCA Menards Series.

The dueling duo went head to head yet again on Friday (Aug. 6) at Watkins Glen International while going for the lead.

Unlike last week at Winchester Speedway where Gibbs dumped Heim for the top spot, Friday’s battle was far more respectful. The Toyotas fought side by side for the majority of a lap after Heim hunted down Gibbs, but after some leaning on one another, Heim pulled through entering the inner loop, taking the lead and eventual victory.

“He didn’t ever get into me this race. I never got into him this race either, so I think that’s just kind of how we’ve been racing each other,” Heim said. “If somebody bumps someone, the other person is going to do it back harder, and that just kind of escalates from there. I knew I was way faster than him at the time, and there was no reason to bump him out of the way and risk any retaliation.”

Gibbs, meanwhile, went on to finish third after Austin Hill got around him for the second position. He was able to maintain a slim two-point advantage in the championship standings over Heim, but that wasn’t any solace to Gibbs after the race.

“I mean, second-place loser, so it’s not really good,” Gibbs said. “But you know, we fought. Days like this are hard. I feel like it’s hard for a lot of people to kind of experience what a driver feels. We all work hard and it’s just sucks to finish third, but hey, I’d rather finish third than finish fourth or fifth or sixth. But you know, I’d rather be winning all of them. So days like this you just got to persevere and keep hammering down.”

The intensity of their battles has brought plenty of attention to the series. Both drivers are in Toyota’s driver development program and are brash, fiercely driven teenagers, with Gibbs 18 years old and Heim 19.

Corey Heim celebrating his win right next to the man he passed for the lead, Ty Gibbs. #ARCA pic.twitter.com/roHBUdvHlB

Both are eagerly trying to show they belong in NASCAR’s upper tiers sooner than later. Intentionally or not, it’s obvious they race each other harder than any other driver on the track.

“You kind of have to,” Heim explained. “He’s been really good week in and week out and Ty’s been a really strong competitor obviously throughout the year, having as many wins as he does and running as strong as he does on a week-to-week basis. Have to run hard.

“Just looking at today, I never got into him or anything. I don’t want to race dirty by any means, and that’s just how we’re going to go for the rest of the year.”

Gibbs knows that competition is all part of the game. The key for him, he said, is timing the aggression appropriately.

“I mean, there’s definitely times where you got to repay the favor, but I feel like I race the other 30 cars out here the same and I’m going to race hard,” Gibbs said. “That’s what I’m going to do. I love racing and that’s just how it’s going to be.”

In the midst of this rivalry sits a championship at stake. Gibbs holds the advantage both in points and in wins with seven victories, but Heim is making him work for every point, claiming five checkered flags himself.

At this juncture, Heim has no doubt this fight will go back and forth straight through the final seven races of the ARCA season.

“How could it not be?” Heim said. “Week in and week out, we normally finish 1-2 to one another and I think it’s going to be really close, especially at some of the tracks that I think that [we] are really strong at like Salem and the two dirt tracks and some others as well. So we’ve got some really good races for Venturini and me as well on the schedule, and I’m really looking forward to that.”

Next ahead sits Michigan International Speedway on Aug. 20, followed by a race at the Illinois State Fairgrounds just two days later. Heim knows he can’t dwell on the points situation, but still knows he has to be smart when contesting a position.

“Everybody’s counting points,” he said. “But I think now that we’re winding down to the end of the season, you have to be a little bit more cautious about it. But our goal remains the same — week in and week out, we’re going to try to win races, and that’s still our goal.”