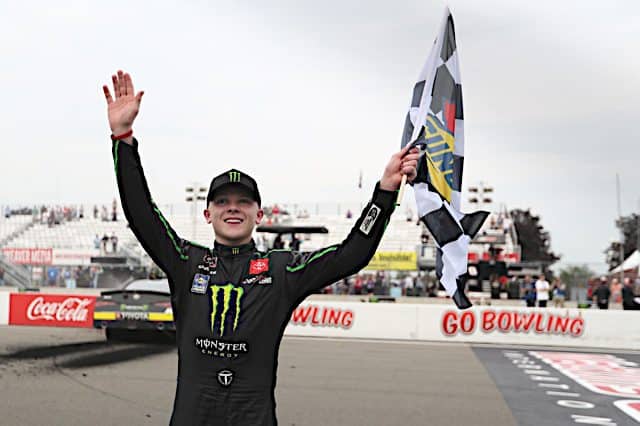 Ty Gibbs has proven time and again he is an extremely talented racecar driver.

What made Saturday’s (Aug. 7) performance at Watkins Glen International different was that he cleanly and outright beat two of the best road racers in the NASCAR Xfinity Series to lead a race-high 43 laps and claim his third victory of the season at just 18 years old.

Gibbs first had to run down Austin Cindric for the lead after a restart on lap 71 after Cindric ran Gibbs wide in Turn one. Gibbs was unrelenting and hounded the rear bumper of the No. 22 before returning the favor by running Cindric wide in turn six and reclaiming the top spot.

Gibbs pounced to Allmendinger’s right down the straightaway out of turn fie and cleared Allmendinger around the outside of turn six to power through to the lead and eventual win.

The performance left even Gibbs’ fellow competitors impressed with his abilities.

Gibbs was the victor in February’s race at the Daytona International Speedway road course, while Allmendinger and Cindric eliminated themselves battling for a stage win. This time, Gibbs had the best in the series to fight past and fend off.

“He’s got a lot of talent,” Allmendinger said. “He’s in probably the best racecar in the series, for sure. You know, anytime anybody gets in that car, it’s really quick. But you know what, on a day like today, Ty earned it.

“I mean, I did everything that I could. I mean, I got the restart every time on him and tried to fight them off. But he was just a little bit too good and so was that car.”

Cindric said he was “not overly bothered” about Gibbs’ move to retake the lead, citing Gibbs made the same move Cindric pulled for the same position.

“It’s hard racing,” Cindric said. “He deserved the win. He was the fastest car. And I feel like when he had to save fuel, he probably saved a bit in his tires and I was trying to catch up. But maybe I should have played that a little bit different.”

Like Allmendinger, Cindric noted Gibbs is in some of the best equipment in the series. But it’s hard to ignore that Gibbs is often outrunning his Joe Gibbs Racing teammates in the same cars too.

“He’s got a lack of experience and he’s done a great job with with the track time that he’s had,” Cindric said. “So like I said, you can’t take anything away from him. He’s in victory lane. That’s that’s all we’re all here to do and he beat all of us.”

Even Justin Allgaier, who earned a fourth-place finish, couldn’t help but acknowledge what Gibbs has done so quickly and at such a young age in only 10 Xfinity Series starts. He did note, though, a part-time schedule can play into Gibbs favor as he eases into the series.

“I’ve been super impressed with him,” Allgaier said. “I think he has some advantages in the fact that not racing every week, you’re able to kind of focus in on the races that you’re going to run and you can be more prepared for those races. And obviously, he’s done a great job of being prepared when he gets here.

But like you said, it’s not easy. I mean, you start to drive the racecar and put yourself in the limit. That 54 team is truly incredible. They’ve definitely been special this year. And it’s been — I would say fun to watch, but it’s not fun to watch when you get beat by them. But, they’ve done a great job. Ty’s done a great job and obviously he’s got a great future.”

Yes, Gibbs is the grandson of the team owner and has every resource available at his fingertips. But credit to the teenager for maximizing every opportunity he can.

“I mean, take his last name out of the equation,” Allgaier said. “I mean, just his work ethic and his ability to come to the racetrack and be be in the car and be as good as he is every week is is definitely a big deal. It would not surprise me to see him in a Cup car really, really soon.”

If Penske and Kaulig can’t field equal cars who’s fault is that? The captain losing a wallet war? Priceless !