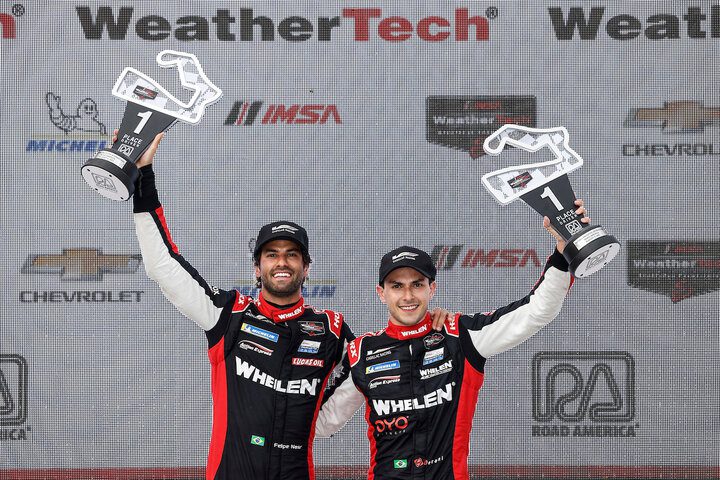 Action Express Racing’s Pipo Derani and Felipe Nasr took the lead with a little more than three minutes to go Sunday (Aug. 8) when Meyer Shank Racing with Curb-Agajanian’s Dane Cameron was forced to pit for a splash of fuel.  From there, Nasr held on to win the Road Race Showcase at Road America.

“The race started pretty well.  It was great to get pole position yesterday because I know how important it is at this place to be driving in clear air and that helps the whole stint of the car.” Nasr said after the race.  “You can look after your tires and the fuel economy and everything. Right at the start I had a lot of pressure from [Ricky Taylor] when we went into turn 1, but I got [him] covered.  After that it was all about hitting the marks.

“It’s hard to believe when you have a perfect weekend like this because it’s so hard,” Nasr continued.  “Doing that after winning Watkins [Glen], a back-to-back win just shows how much work and effort we’re putting into the team.  The fight is on.”

Ricky Taylor took the battle right to Nasr on the start, putting himself side-by-side with Nasr.  Nasr did not yield and the two drivers went side-by-side.  Eventually, Nasr was able to pull away and open a decent advantage on the pack.

JrIII Racing’s IMSA WeatherTech SportsCar Championship debut came to an early end when Terry Olson pulled onto the grass just past the Sargento bridge.  This brought out the race’s first full course yellow.  Olson was ok, but the No. 30 JrIII Racing Ligier JS P320-Nissan was done for the day.

Even with Road America being over four miles in length, it only took a few laps after the rest for Nasr and the rest of the DPi cars to catch the back of the field.  Chip Ganassi Racing’s Kevin Magnussen made an aggressive move on CarBahn Motorsports with Peregrine Racing’s Richard Heistand entering the Kink.  Magnussen backed off, but it was enough for Heistand to enter wide.  That pushed him into the grass and into a spin.  Heistand didn’t hit anything, but did throw dirt onto the track.  That resulted in another caution.

Nasr continued to lead until he made his second pit stop just shy of the halfway point.  Here, Nasr gave way to Derani.  The Shank team pitted four laps before Nasr, in an attempt to jump the Cadillac.  This move was successful as Cameron was able to emerge from the round of stops with the overall lead.  However, the strategy put the team on a very difficult fuel saving strategy for the remainder of the race.  How difficult?  Cameron’s stop 72 minutes into the race came on lap 31.  The fuel window for DPi cars was considered to be roughly 20 laps.  From that point, there were 45 laps to go.  In order to make the finish on one more stop, Cameron would have to add at least two laps to both runs and three to one of them.

Cameron did his best to do this.  He was able to get his fuel range up to 22 laps, but it was not enough.  Meanwhile, Derani was able to easily hold off the rest of the class.  When Cameron was forced to pit, Derani took the lead and simply held on for the win.  It is Action Express Racing’s second win in a row after they won the WeatherTech 240 at the Glen on July 2.

Derani and Nasr ended up 1.594 seconds ahead of Mazda Motorsports’ Oliver Jarvis and Harry Tincknell.  Magnussen and Renger van der Zande were third, then Ricky Taylor and Filipe Albuquerque.  Cameron and Olivier Pla held on for fifth.

In LMP2, PR1 Mathiasen Motorsports’ Ben Keating led from the pole and was not challenged early.  The first caution for Olsen’s issues resulted in a split strategy, though.  Keating chose to pit for the first time, which gave the class lead over to WIN Autosport’s Steven Thomas.  Thomas chose to stick to the original strategy from the start.  As a result, he stopped at the end of lap 20, 47 minutes in.  That satisfied Thomas’ minimum drive-time and allowed the team to put Tristan Nunez in the car.

With Mikkel Jensen in the car, PR1 Mathiasen Motorsports continued to lead after the second caution.  However, Era Motorsport’s Ryan Dalziel was able to run Jensen down and take the class lead just before the halfway point.

Aside from another round of stops later in the race, Dalziel was able to hold on from there to give himself and Dwight Merriman their second win of the year.  Their margin of victory was 5.641 seconds over Tower Motorsport by Starworks’ Gabriel Aubry and John Farano.  Keating and Jensen had to settle for third.

LMP3 saw Performance Tech Motorsports’ Dan Goldburg start on pole, but he almost immediately lost his advantage to Riley Motorsports’ Gar Robinson.  Andretti Autosport’s Jarret Andretti followed past into second, then made his move to take the class lead on lap 2.

Goldburg dropped back pretty quickly, then collided with Olson in turn 13, spinning both cars out.  The incident may have played a role in Olson pulling off and retiring early on.  For Goldburg, he was forced to pit under caution to get a new nose for his No. 38.

CORE autosport was extremely strong Sunday.  Jon Bennett was able to move himself up to third during his stint.  Colin Braun took over during the caution for Heistand’s spin.  On the restart, Wulver Racing’s Augie Pabst was able to get past Andretti for the class lead.  Only a few seconds later, Braun was able to make short work of the series debutant to take the lead.  From there, no one could touch Braun as he and Bennett held on to take their second win of the year.

Bennett and Braun’s margin of victory was 22.243 seconds over Goldburg and Rasmus Lindh, who recovered from their early issues.  Robinson and Felipe Fraga were a lap down in third, followed by teammates Jim Cox and Dylan Murry.  Andretti and Oliver Askew were fifth.

GT Le Mans saw Corvette Racing, primarily the No. 3 of Jordan Taylor and Antonio Garcia, dominate the proceedings.  However, like some of the other classes, the race came down to fuel mileage.

WeatherTech Racing’s Cooper MacNeil and Matt Campbell used an alternate pit strategy to thwart the Corvettes.  Campbell stopped with 62 minutes to go for fuel and tires.  From there, they chose to conserve fuel to the maximum degree to make that fuel last.  Ultimately, it ended up being a 30-lap run to the finish when GTLM teams were expected to go somewhere between 24-26 laps.  That required short shifts and substantial coasting at the end of straights.

Garcia pitted 11 laps after Campbell and could run flat out to the finish.  However, they had spotted the Porsche a lead of nearly 50 seconds.  Garcia tried to run down Campbell over the final 36 minutes of the race, but he was far enough behind that Campbell had to pit in order to be caught.  Campbell’s fuel just barely held out, allowing himself and MacNeil to take their second win of the year.

Jordan Taylor and Garcia ended up 15.855 seconds back at the finish.  Tommy Milner and Nick Tandy ended up a lap down in third.

GT Daytona saw Vasser Sullivan’s Aaron Telitz start from the pole, but switch lanes on the start.  That is an infraction and Telitz had to serve a drive-through penalty.

Telitz’s penalty gave the class lead to Turner Motorsport’s Robby Foley in the BMW M6 GT3.  Telitz dropped to the rear of the field, but quickly recovered during the first caution, which created a split-strategy.  Frankie Montecalvo took the class lead by not stopping during that caution while others such as Foley did.

PFAFF Motorsports’ Zacharie Robichon made an early stop on lap 10, prior to the first yellow.  That meant that the team basically got a free second stop when the yellow came out.  A much quicker stop than their opposition allowed Robichon to move up to second.  When Montecalvo pitted under green for his first stop on lap 20, 50 minutes into the race, Robichon took the class lead.

From there, it was a PFAFF Motorsports show.  Both Robichon and Laurens Vanthoor proved to be the class of the field.  They only surrendered the lead for two laps in and around a round of stops for the rest of the race en route to their second win of the year.

Robichon and Vanthoor ended up 11.876 seconds ahead of Foley and Bill Auberlen.  Wright Motorsports’ Trent Hindman and Patrick Long were third in their Porsche, followed by The Heart of Racing’s Roman DeAngelis and Ross Gunn.  Telitz and Jack Hawksworth were fifth.

IMSA WeatherTech SportsCar Championship teams will take the next month off before traveling to WeatherTech Raceway Laguna Seca for another sprint race.  The Hyundai Monterey Sports Car Championship is scheduled to go green on Sept. 12 at 4 p.m. ET and will air live on NBCSN.