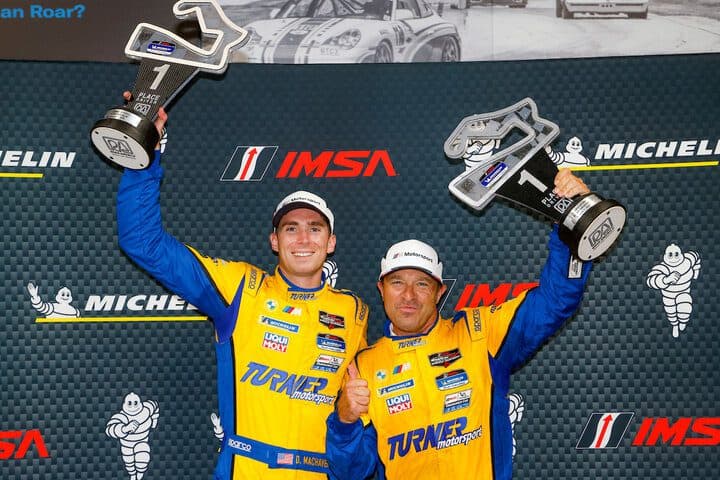 Turner Motorsport’s Bill Auberlen and Dillon Machavern were able to stretch their fuel the final 78 minutes all the way to the finish to win the Road America 120 Saturday (Aug. 7) in near darkness.  It is Machavern and Auberlen’s second win of 2021.

“I can’t believe that we did it.  The fuel numbers were insane, but everybody else had to do it as well,” Auberlen said after the race to NBC Sports’ Chris Wilner.  “[These were] treacherous conditions, and a pleasure to drive this BMW M4 GT4.  The Turner [Motorsport] guys give me a great car every time.”

Conditions at Road America Saturday were moist.  The race started on a wet track with drizzle falling.  Most, if not all drivers started the race on wet tires.

Machavern, who won the pole for the race early Saturday morning, led the field to green with Patrick Gallagher and Russell Ward giving Chase.  The race was not under green for long as Mark Siegel spun exiting turn 7 and clipped the wall on lap 2.  While he did try to get back underway, his Audi R8 LMS GT4 ultimately came to rest on the inside of the track, bringing out the yellow.  Siegel was ultimately out on the spot.

On the restart, Gallagher immediately started pressuring Machavern for the lead.  In the Carousel, Machavern bobbled, allowed Gallagher’s Aston Martin to snatch the overall lead.  Once there, Gallagher was able to pull out a couple of seconds on Machavern and the rest of the pack.

As the race continued on, what little precipitation that was falling was being overcome by the rain tires on the 35 cars on-track.  That meant that a dry line began to form and teams had to formulate plans in regards to a possible switch to slicks.

Having said that, there were still problems on the course.  TeamTGM”s Hugh Plumb spun in turn 6 after contact from FCP Euro’s Michael Hurczyn.  Later on, Wright Motorsports’ Ryan Hardwick spun exiting the Kink and nosed into the wall.  His Porsche had nose damage, but he was able to continue.

Unfortunately, that was not the end of Hardwick’s issues.  A couple of laps later, Hardwick pulled off at Canada Corner with a mechanical issue.  In addition, Copeland Motorsports’ AJ Muss cut his left front tire and left his casing in Canada Corner.  These two scenarios triggered a run to the pits as they happened just after the 40-minute mark of the race, meaning that minimum drive time had been satisfied.

The full course caution was thrown shortly afterwards to retrieve Hardwick’s car.  By that time, nearly the entire field had already stopped.  Michael McCann Jr. had the overall lead when the yellow flew, but he dropped to the rear when he stopped so that Andrew Davis could get in.

Following the stops, HTP Winward Motorsport’s Indy Dontje ended up with the overall lead.  Fog was rolling in as heavier rain was approaching the hilly race track.  However, Dontje’s lead was very short-lived.   On the restart, Auberlen immediately swept to the outside on the frontstretch and was able to take the overall lead in turn 1.

Had the precipitation level remained the same from the first half of the race, no one in Grand Sport would have been able to make it to the finish on fuel.  Shortly after the restart, the rain began to pick up in intensity.  Naturally, that slowed the pace significantly.

The increased precipitation also led to a series of minor incidents.  Trenton Estep, making his Grand Sport debut for CB Motorsports, executed a 1080 exiting turn 7 in his Mercedes.  Murillo Racing’s Eric Foss spun in turn 5.  A couple of laps later, Blackdog Speed Shop’s Michael Cooper went straight at the same place.  Kuno Wittmer, who had fought back from a bad starting spot, spun in turn 14.

Once out front, Auberlen was able to pull out a five-second lead on Notlad Racing by RS1’s Stevan McAleer.  It was nearly 20 seconds back to a scrum for third involving both HTP Winward Motorsport Mercedes, Trent Hindman, Scott Andrews and Spencer Pigot.  Unfortunately, Andrews’ race came to an early end with 35 minutes to go after contact with Dontje broke a front suspension part.

Any chance for McAleer to challenge Auberlen ended with 25 minutes to go when the No. 23 Aston Martin cut the left rear tire.  McAleer was able to nurse the Aston Martin back to the pits for replacement rubber.  The Notlad Aston Martin ended up finishing 11, more than 90 seconds behind.

With McAleer out of the way, Auberlen now had a 16-second lead.  As a result, he could slow down a little in order to conserve fuel.  The intensifying rain also slowed the pace.  Those behind him were still in battles and had to run hard.

Auberlen dropped his pace enough that his lead dropped from 16 seconds to roughly eight.  Meanwhile, a number of his immediate competitors were forced to pit for fuel.  There were also a couple of drivers that ran into issues on-track.  TeamTGM’s Matt Plumb slid off-course in the Kink and hit the SAFER Barrier, losing a mirror in the process.  Estep also had another spin, this time in the Carousel.

Auberlen and Machavern’s margin of victory was 15.750 seconds over HTP Winward Motorsport’s Alec Udell and Bryce Ward.  Dontje and Russell Ward were third, followed by Vin Barletta and Robby Foley in the second Turner BMW.  McCann and Davis ended up fifth.

Pigot and Sheena Monk finished the best of those who had to pit for fuel in sixth, followed by Foss and Jeff Mosing.  Hindman and Alan Brynjolfsson were eighth, while Cooper and Tony Gaples were ninth.  Brent Mosing and Kenny Murillo in the second Murillo Racing Mercedes rounded out the top 10.

KMW Motorsports with TMR Engineering’s Tim Lewis Jr. ended up with the class lead after the caution.  Atlanta Speedwerks’ Ryan Eversley was second and had one of the best cars.  However, he dropped like a stone and was twitching on-track.  Why did this happen?  Well, Eversley was one of the only drivers put out on track on slicks.

Yea that was me on the restart. We went from 2nd to 9th in 3 corners. Once we put rains on we were the fastest car on track for the rest of the race but it was too late. Without a yellow we were too far back to catch the top 8.. Absolutely gutted to throw away a result like that. https://t.co/C4Q0qS4N5k

Eversley also stated on Twitter that he did not know that the team had put slicks on during his pit stop.  As a result, when the car started spinning tires under acceleration and twitching, he thought something had broken on his Honda.

Another team that chose to go with slicks was the points leading No. 77 Hyundai Veloster N TCR for Taylor Hagler and Michael Lewis.  Lewis had a better time on the slicks than Eversley, but still dropped well back before stopping at the same time McAleer did to switch to wet tires.  Hagler and Michael Lewis would finish 11th in class and lose a good chunk of their points lead.

Behind Lewis, the Bryan Herta Autosport Hyundai Elantra N TCRs of Parker Chase and Mark Wilkins were hot on the Alfa Romeo’s heels.  Chase was able to run Lewis down and pass him for the lead on the outside in the Carousel with 29 minutes to go.

Once out in the lead, Chase was able to pull out a decent advantage over the Alfa Romeo.  Then, trouble struck.  Chase slid off the road in turn 3 with 16 minutes to go.  That allowed Tim Lewis Jr. to retake the class lead.  Chase was able to avoid the wall, but dropped all the way to fourth.

Wilkins was able to get to Tim Lewis Jr. shortly after Chase took the lead, but the Alfa Romeo was eventually able to shake Wilkins.  When Chase slid off the road, Tim Lewis Jr. inherited a lead of about three seconds.

Fuel was an issue for the Alfa Romeo as well since they made their only pit stop before the yellow.  As it turned out, it was more of an issue for the Elantras.  On the final lap, Wilkins ran out of fuel exiting the Kink.  Given the steep hills, he was unable to make it back to the pits.  Tim Lewis Jr. and Roy Block were able to hold on to take their first-ever victory.

Tim Lewis Jr. and Block’s margin of victory was 3.883 seconds over the Hyundai Veloster N TCR of Van der Steur Racing’s Denis Dupont and Rory van der Steur.  Chase and Norman ended up third, while Gottsacker and Wilkins were classified fourth despite stalling in turn 13 on the final lap.  JDC-Miller MotorSports’ Chris Miller and Mikey Taylor finished fifth.  Given their positioning right behind Auberlen at the finish, the No. 17 Audi was a lap down.