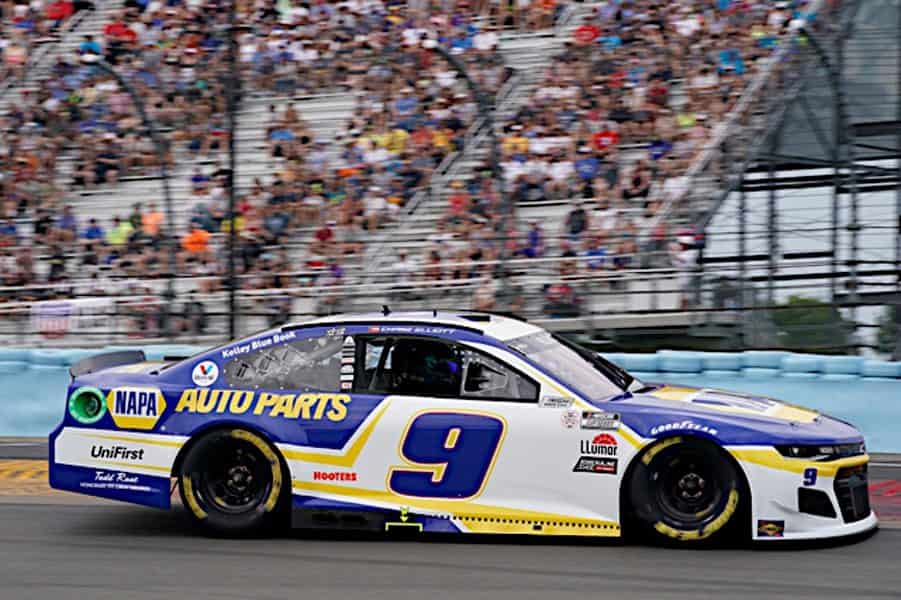 Watkins Glen, New York – Chase Elliott rocketed from the rear of the field twice with what was unquestionably the fastest car on the track.

The two-time defending Watkins Glen International winner, however, still came up 2.4 seconds short of the win, finishing second behind Hendrick Motorsports teammate Kyle Larson on Sunday (Aug. 8) at the Glen.

The difference between first and second was the result of a stage two lock-up entering Turn 1 midway through the stage – an error that brought Elliott to pit road with flat-spotted tires at lap 30. The ultimate repercussion was an altered strategy that forced Elliott to erase a 12-second deficit under green in the final stage.

He eliminated 10 seconds, but 12 proved to be too much to overcome.

“That was ultimately the straw that broke it,” Elliott said. “Just my bad and completely my fault. I hate it, but can’t do anything about it now. Just move on and try again.”

The No. 9 Chevrolet started from the rear after the team was dealt an L1 penalty to begin the day, violating Rules 20.4.8.3.a and 20.4.8.3.b of the NASCAR rule book which pertains to the rear-window air deflectors. That meant crew chief Alan Gustafson was ejected, the team was fined $25,000 and a loss of 10 driver and owner points.

Turns out this was the last we’d see of Alan Gustafson today. #NASCAR https://t.co/CopfwKuln1

Yet despite all the trouble, he still stormed through the field and had a legitimate shot to win with all signs pointed toward an improbable comeback.

“That was the frustrating part. I think that was the best we’ve been here,” said Elliott, the defending Cup champion. “I’m proud of that. You hate to feel like you brought your best effort and not get the result you want. But that’s part of it.”

Starting from the rear forced him to charge through the field, which proved to be of little issue. By the competition caution at lap 10, Elliott had already picked up nearly 20 positions.

Was it more difficult for Elliott to be patient when he has a car that fast trying to carve through the field?

“Obviously. I messed up, so I wasn’t patient enough I guess,” Elliott said.

Road courses have clearly been the No. 9 team’s strong suit for the past three years. The program will get another opportunity to capitalize when the Cup Series heads to the Indianapolis Motor Speedway road course for the series’ debut on the layout on Sunday, Aug. 15.