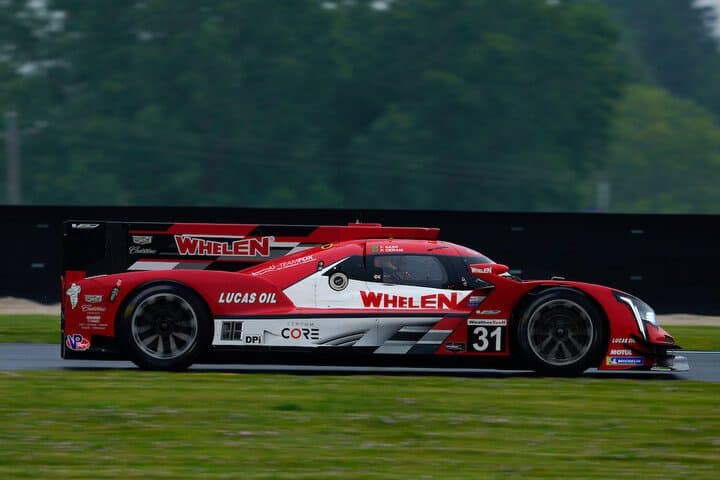 After a dry practice session Saturday morning (Aug. 7), the skies opened up at Road America in time for qualifying.  Action Express Racing’s Felipe Nasr won the pole for Sunday’s Road Race Showcase with a lap at 113.922 mph.  Given the conditions, it was actually not the fastest lap of qualifying.

For Nasr, the session was rather difficult since he had no time on-track in the wet prior to qualifying.

“It was my first time driving in the rain here because we didn’t take part in the test yesterday in [Practice No. 1] due to the conditions,” Nasr said after the session.  “So for me, it was like ‘I’ll try to understand the grip level.’  And as you go out there as a driver, you never know what to expect.  You’re just  driving to the grip, and with the forecast, everybody was saying you didn’t know what was going to happen.  There was a lot of pressure to put out a lap quite early.  So I kept chipping away each lap.”

By the time the DPi teams went out, the 4.048-mile road course was the wettest that it was in the entire qualifying session.  Unlike recent weeks, the Cadillacs were fastest for nearly the entire session.  Nasr put himself on top of the timesheet six minutes into the session and continued to better his time until time expired.

In LMP2, PR1 Mathisen Motorsports’ Ben Keating set the quickest lap in class pretty much right away.  That held up the whole session until right at the end, when he bettered it with a lap at 105.210 to win the pole.  The lap was nearly a second and a half faster than WIN Autosport’s Steven Thomas, while Tower Motorsport by Starworks’ John Farano was third.

LMP3 saw the seven teams on-site tip toe their way around the course early on.  Once everyone came up to speed, Performance Tech Motorsports’ Dan Goldburg set the time for everyone to beat.  Only Riley Motorsports’ Gar Robinson was able to beat it the first time around.  On his second lap, Goldburg was clocked at an average of 104.760 mph.  That was good enough for Goldburg to take his first career IMSA WeatherTech SportsCar Championship LMP3 pole.

Corvette Racing’s Jordan Taylor will start on the GT Le Mans pole with a lap at 103.369 mph.  Jordan’s lap was five-eighths of a second quicker than teammate Nick Tandy.  WeatherTech Racing’s Cooper MacNeil will start third.

The track was actually driest during the GT Daytona position portion of qualifying.  As a result, the quickest laps of the whole session were seen here.

Aaron Telitz, Trent Hindman and Robby Foley traded fast times during the first half of the session.  With five minutes to go, Telitz turned in a lap at 114.571 mph to win the class pole.  Despite being faster than the DPis, the lap was still seven-tenths of a second faster off the quickest laps from practice Saturday morning.

The Road Race Showcase is scheduled to go green at 2:40 p.m. ET Sunday afternoon.  The race will be streamed live on NBCSports.com starting at 2 p.m.  Tape-delayed coverage of the race will air on NBCSN Sunday night at 8 p.m. after coverage from Nashville wraps up.