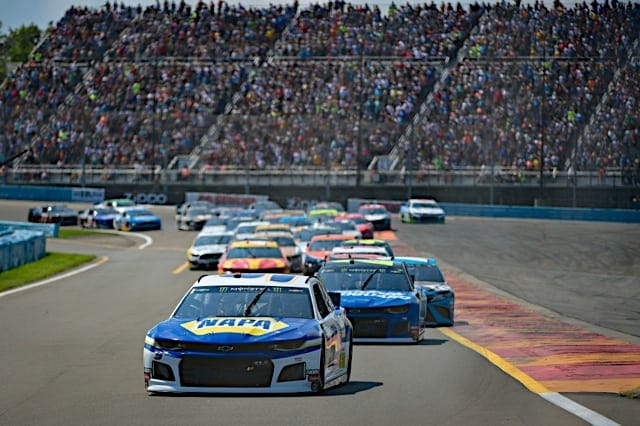 Hello, Watkins Glen. It’s been a while.

Absent from the 2020 schedule due to the COVID-19 pandemic, it’s been two full years since NASCAR took to the seven-turn, 2.454-mile road course in upstate New York. Chase Elliott claimed his first career Cup Series win there in 2018, followed by a back-to-back effort in 2019 before the time away. It’s also been a while in terms of motorsports action: NASCAR hasn’t raced for nearly three weeks due to the postponed 2020 Tokyo Olympics going on across the Pacific, but they’re back underway Sunday (Aug. 8) for the Go Bowling at The Glen.

According to weather.com, Sunday could be rainy, dry or somewhere in the middle: As of Sunday morning, (Aug. 7) night, the rain chance spiked at 58% at 5 p.m. ET with scattered and isolated thunderstorms peppering the afternoon’s outlook. This isn’t exactly promising for the race, especially after a Saturday (Aug. 7) where the Camping World Truck Series’ event was shortened by lightning moving into the area.

Brad Keselowski rolls off first for the Cup race, flanked by Team Penske stablemate Joey Logano and with another teammate in Ryan Blaney behind him. Kyle Larson and Kevin Harvick round out the top five. Denny Hamlin, Christopher Bell, Aric Almirola, Martin Truex Jr. and Alex Bowman complete the top 10 in the starting order.

Elliott was set to start 11th, but will drop to the back of the field after his No. 9 Chevrolet failed inspection twice due to rear window air deflector issues. Crew chief Alan Gustafson was also ejected, while the team lost 10 driver and owner points due to the L1 penalty and was levied a $25,000 fine.

Bell’s No. 20 team received the same treatment for the same reason, with crew chief Adam Stevens punted before the race. Ross Chastain moves into 10th on the grid with the departures of Bell and Elliott from the first few rows.

Almirola, the most recent Cup winner with a triumph at New Hampshire before the break, has never finished better than 12th at The Glen. R.C. Enerson, who’s made several IndyCar starts in the past few seasons and made his Xfinity Series debut last year, is set for his Cup debut on Sunday in the No. 15.

Along with Elliott, five other drivers have past wins at the track: Logano, Harvick, Hamlin and Truex have one victory apiece, while Kyle Busch has two.

As for Sunday, both Truex and Busch’s crews had changes to their rosters after COVID-19 protocols sidelined a member each, both due to close contact.

Earlier in the several days’ worth of racing, Corey Heim won the ARCA event at the road course on Friday (Aug. 6), while Austin Hill claimed the weather-shortened truck race and Ty Gibbs outran A.J. Allmendinger and Austin Cindric for the Xfinity win.

Tune in for the Go Bowling at The Glen this afternoon on NBC Sports Network at 3 p.m. ET.