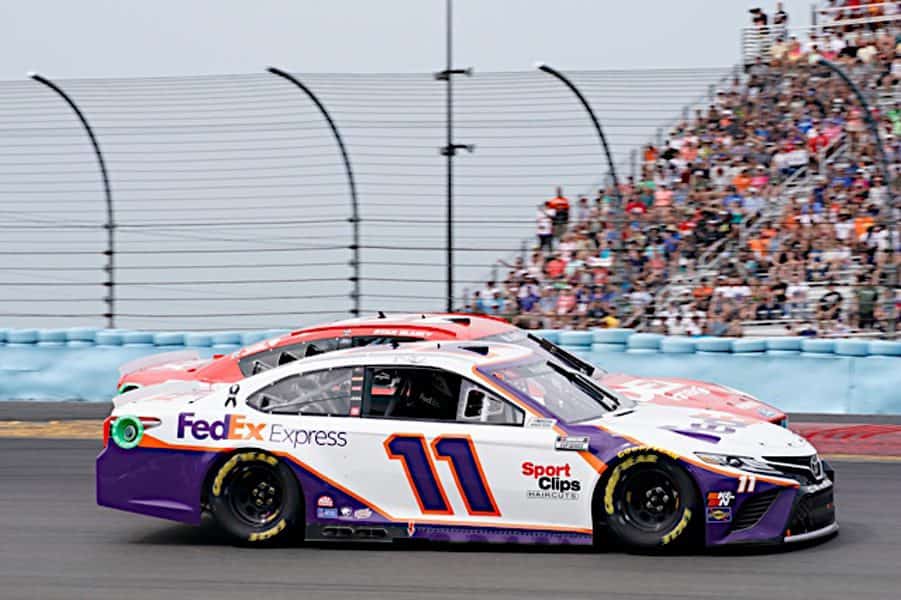 Watkins Glen, New York – The regular season points battle has never been closer than it is after Sunday’s (Aug. 8) NASCAR Cup race at Watkins Glen International.

After holding the lead for 21 of the first 22 races, Denny Hamlin is now tied with Watkins Glen winner Kyle Larson for the top spot with three races remaining in the regular season.

The drivers and longtime friends are reveling in the battle and even taking some lighthearted jabs at each other. Hamlin, who finished fifth, was supposed to give Larson a plane ride home but said he wasn’t waiting for Larson.

“I figured. I won at Sonoma too and he left me,” Larson said with a chuckle.

“It’s it’s a mix of race tracks,” Hamlin said post-race. “We’ve got a little taste of everything. I would suspect this will take until the last lap of Daytona to figure this thing out.”

It very well might. The two are separated by two positions in average finish at Michigan, with Hamlin having the edge, while neither have ever raced at the Indianapolis Road Course, and Daytona, even though one of Hamlin’s best tracks, still presents itself as a wild card as the regular-season finale.

Larson’s five wins to Hamlin’s goose egg looms large though, with an additional five playoff points on the line to whoever earns the title (15 to the winner, 10 to the runner-up). Hamlin, who only has five total playoff points via stage wins, could use the extra points before the postseason.

But he isn’t going to back down, despite the slight advantage Larson and Hendrick Motorsports have at this juncture of the season.

“I race him as hard as I possibly can,” he said. “He’s racing me hard, I’m racing him hard, we understand. It’s really not as much about the performance and extra bonus points as much as it’s just like, ‘we got three to go, fine, who’s gonna come out on top?'”

When told of Hamlin’s comments preparing to race him hard, Larson smirked.

“Yeah, I mean, I don’t know, whatever,” he said with a chuckle. “I want everybody to race me hard.”

Larson pointed to a couple of repeated close calls at Road America, where the No. 5 almost wound up in the grass, as instances of the regular season championship being a foremost thought for the Joe Gibbs Racing driver.

“I knew points was on his mind and trying to hold me back is definitely on his mind,” Larson said. “It’s fun racing him. And I look forward to the next few weeks and really even into the playoffs. There’s still a lot of racing left. I’m glad there’s a fun little regular-season point battle. And I feel like, in the years past, it’s kind of been a blowout. But the tie with three races left is pretty cool.”

Hamlin, an eight-time winner last season who’s still searching for his first checkered flag in 2021, said his enjoyment with this battle comes from the feeling of intensity week to week.

“Honestly, I like this because it’s making me keep my form through the whole year,” he said. “It’s really pushing me to treat every race like a playoff race. I like the competitiveness of it. If had this been a 100 point lead like it was early in the season, maybe you’re kind of just relaxing a little bit. And then all of a sudden you’ve got to turn it on the playoffs come. This is pushing us to go all out every race.”

? “I like this because it’s making me keep my form through the whole year. It’s really pushing me to treat every race like a playoff race.” pic.twitter.com/5OEtDxU0K8

Said Larson: “Say he still had an 80-point lead or something. You could get lazy and not care as much and make mistakes. But now every point matters to get those five extra bonus points. I think keeping your mind strong and sharp through the regular season is important.

With Watkins Glen marking the first of 14 consecutive weekends to close out the season, it’ll be a long grind for all parties involved through the championship finale in Phoenix. With a playoff spot 100% locked up, Larson thinks the battle is aiding him, whether he knows it or not, to be playoff ready.

“I think for him and I both, we’ve been mentally there for a while now,” Larson said. “And yes, I think come to playoff time, we’ll just keep doing what we’ve been doing and hopefully we’ll find ourselves in Final Four.”

Hamlin says although the No. 5 group is “a smidge better” than the No. 11, he wants to gather as much data as possible before making any presumptive judgments.

“I feel like we’re good. We’re really good. I thought we were significantly better than them at Loudon. We had some issues with a lug nut, but we just keep going back and forth each race on kind of who’s better. But he’s obviously got the wins and racking up the bonus points.”

Mmm, is Denny known for choking when it’s all on the line !!