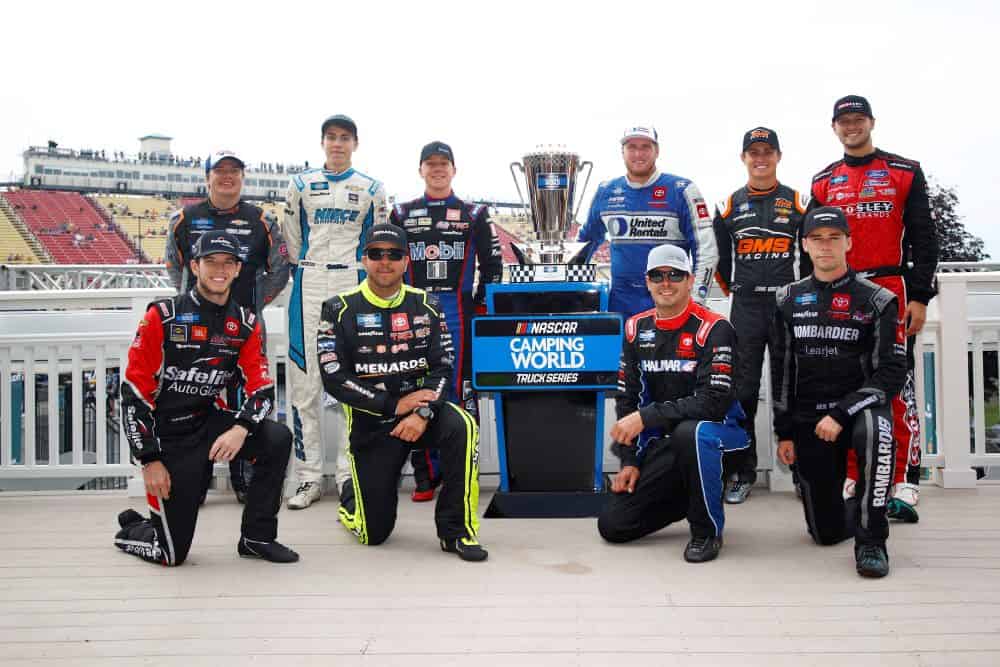 In a Nutshell: Austin Hill scored his second straight win of 2021 with a victory in the Camping World Truck Series return to Watkins Glen International. The polesitter led three times for 35 of 61 laps in the lightning-shortened regular season finale. John Hunter Nemechek finished second, followed by Sheldon Creed. Todd Gilliland and Parker Kligerman rounded out the top five.

While Hill dominated stage two and what was actually run of stage three, Gilliland was the only other driver to lead double-digit laps. At the drop of the green flag, the duo pulled away and gapped he rest of the field by nearly four seconds while battling for the top spot. Gilliland took the lead on lap five and held it until pitting under the stage break caution.

Pit strategy by others throughout stage one saw Gilliland restart 10th, and he spent much of the remainder of the race mired in traffic. He moved up to eighth by the end of stage two and was fourth by the time the checkered flag flew.

The checkered flag over Watkins Glen brought the 2021 Truck Series regular season to a close, and with it, this year’s playoff field is set.

Heading into the race, seven drivers had already clinched their spots based on race wins or points, leaving three positions up for grabs. Carson Hocevar, Stewart Friesen and Chandler Smith snagged the final three playoff spots and will join the championship battle.

For Smith, there was some doubt about his race would turn out. Early at Watkins Glen, the No. 18 team thought something was broken in the front end after contact in turn 1 on lap 1. But despite those problems, Smith kept plugging away and ended up 18th when the checkered flag flew. His truck ultimately failed post-race inspection for a ride height violation, but it didn’t affect his playoff standing.

It doesn’t go unnoticed that the reason Smith was able to point his way into the playoffs came because NASCAR didn’t give Grant Enfinger a waiver to be eligible for the championship battle, despite being solidly inside the top 10 even with missing the Daytona International Speedway road course race due to sponsorship.

The series takes a weekend off before the playoffs kick off at World Wide Technology Raceway at Gateway on Aug. 20.

In his seventh start of a part-time season, Kligerman snagged his best finish of the year. After starting 38th, the driver of the No. 75 Chevrolet jumped 20+ positions in stage one and managed to stay out of trouble to bring home a fifth-place result. It’s his first top five this season.

After a runner-up finish at Circuit of the Americas earlier this season, Kaz Grala was once again tapped to pilot the No. 02 Youngs Motorsports Chevrolet. And while there were high hopes for a strong race given his prior performance, Grala suffered early right front damaged while avoiding a spinning Tate Fogleman. The team made repairs and allowed Grala to keep going, but a run from deep in the field proved challenging. He was 12th when the lightning that ultimately ended the race hit.

Chad Chastain, brother to NASCAR Cup Series driver Ross Chastain, made his Truck Series debut at Watkins Glen, and it took him less than 10 laps to find trouble. After wheel-hopping into the corner, the driver of the No. 45 Chevrolet spun into the tire barrier in turn 1. While the damage wasn’t terminal, he did go a few laps down and limped to a forgettable 35th-place finish.

Thankfully his melon was protected ? pic.twitter.com/CRGGlGUpdo

Rookie of the Year contender Chase Purdy was sidelined for Watkins Glen after testing positive for COVID-19. In his place, Xfinity Series driver AJ Allmendinger, who made his first Truck Series start since 2008, was tapped to pilot the No. 23 Chevrolet. Despite starting 25th, Allmendinger’s road course prowess tapped him as one of the favorites to race through the field, but he and Derek Kraus brought out a late yellow after contact in the inner loop and Allmendinger was left to settle for a 28th-place finish.

Go get ‘em this weekend @AJDinger, this team deserves it??” pic.twitter.com/QazCpDRL2I

A car accident shortly after his 16th birthday pushed back Taylor Gray‘s Truck Series debut while he recovered from those injuries, but his time finally came at Watkins Glen. He started 32nd and finished 35th, but that doesn’t tell the whole story of his race. He was as high as 17th before a pit stop under the first yellow and restarted at the rear of the field after facing a penalty for a crew member over the wall too soon. Gray ended stage one outside the top 20 after short pitting and ran as high as 11th before complaining of power loss. The time to make repairs allowed him to finish the race, though he was eight laps behind the leader.

Point Report: Regular season champion Nemechek heads into the playoffs with a whopping 28-point advantage over Watkins Glen winner Hill. Meanwhile, the remainder of the top five find themselves separated by a mere 10 points. Ben Rhodes is seeded third followed by Gilliland. Creed rounds out the top five.

Zane Smith sits sixth, 40 points behind the leader and five ahead of Matt Crafton. Rookie Hocevar is eighth, followed by Friesen and Chandler Smith, who are tied for the final two positions.

Enfinger leads the non-playoff drivers and holds a 72-point advantage over Tyler Ankrum despite having one less start. Kraus, Johnny Sauter and Austin Wayne Self round out the top 15 in the standings.

Good day for our 2 team, passed a lot of trucks, had really good speed and definitely wanted those final 11 laps at the end but onto the next one, also tried some hot Cheeto Mac n cheese… not a fan. Thank you team! @liftkits4less @GMSRacingLLC $FLES #liftkitsforless

What an awesome day! Fun getting to the top-5 for the @fast truck ?

Considering I guaranteed I would get a top-5 earlier this week, haha

Now at dinner for my bday. I’m tired.

Up Next: The Truck Series takes a weekend off before heading to World Wide Technology Raceway at Gateway for the first playoff race in the Round of 10. Coverage for the WWT Raceway 200 presented by CK Power will begin Friday, Aug. 20 at 9 p.m. ET on FOX Sports 1.