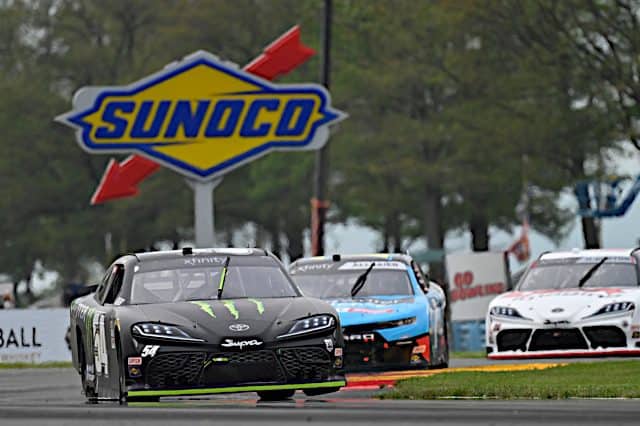 If you are part of the crowd that believes Ty Gibbs is driving a Joe Gibbs Racing Toyota in the NASCAR Xfinity Series based purely on who his grandfather is, hopefully, his performance on Saturday at Watkins Glen International changed your mind. Gibbs led a race-high 43 laps and outdueled — cleanly — two of the best road course racers in NASCAR today, A.J. Allmendinger and Austin Cindric.

On the second to last restart of the Skrewball Peanut Butter Whiskey 200, Gibbs lost the lead to Cindric but regained the lead one lap later. Then on the final restart, Gibbs once again lost the lead, this time to Allmendinger. He overdrove the car into turn 1, as did Allmendinger. As they traveled over the bumps in the runoff area, Gibbs’ car became light, where Allmendinger kept the car straight. He took the lead, but Gibbs was in hot pursuit.

Earlier in the race, Gibbs trailed Allmendinger, finishing second to him in stage two. Using lessons learned from the five-time Xfinity Series road course winner, Gibbs found his way past Allmendinger. Gibbs had a run on Allmendinger exiting the carousel and completed the pass through turn 6 with three laps to go. There was nothing Allmendinger could do, and Gibbs went on to win his third race of the season in his 10th start.

It was clear the strength of Ty Gibbs’ Toyota on Saturday was rear grip through the corners. Yet, when the field was bunched up after a restart, Gibbs never entirely ran away with the lead. Whether he intentionally was holding back to conserve his equipment or not, the sense was that he was still beatable by either Allmendinger or Cindric. When others held the lead, they never gapped the second-place car either. It was a close battle in the top positions, let alone for the lead, for most of the race. Granted, cautions assisted in this, but that is what race fans want to see: close racing. If natural cautions help keep the field close, that helps provide an even better product for those at the track and watching at home.

A shoutout to Michael Annett is needed because he is just a few weeks removed from having leg surgery after missing the past two races at Atlanta and New Hampshire. Returning to the driver’s seat after any injury can be difficult, but returning on a road course is that much harder. The bumps from the rumble strips are enough to rock a driver around inside. To be expected, Annett was seen before the race walking with a bit of a limp. Annett went the distance and, before the final caution, was poised for a top-10 finish. He finished 11th and lost only two points to the cutoff line after losing 37 points in his two-race absence.

Recovering from surgery on his leg, @MichaelAnnett is back and ready to go today for @JRMotorsports at @WGI.

Walking with a noticeable limp and cane. pic.twitter.com/bhLnzQSbVp

Crashing in the opening laps of your first career race is never good. Per Bob Pockrass, Michael Munley spent time on pit road before the race to fix a radio issue. As Munley attempted to make up time on the field, he lost control entering the carousel and smashed his No. 6 JD Motorsports Chevrolet into the tire barriers. The crash happened on lap 3, but Munley completed the race, albeit with a battered car. Through attrition, he finished 35th and suffered no further issues.

Munley (the 6) was allowed to go to the pit stall for a radio issue. They fixed the radio.

Jeremy Clements was running ninth when he went around in turn 1 with 23 laps to go and dropped back to 31st. His car didn’t possess race-winning speed, but it had the pace to finish inside the top 10. Unfortunately, he only made his way back up to 16th, and to make matters worse, it came with a loss of 10 points to the playoff cutoff line. Riley Herbst is 13th in the standings and finished 13th in Saturday’s race, scoring 31 points, seven of which were stage points. Had Clements finished inside the top 10, he still would have lost points to Herbst, but the loss could have been five compared to 10 — and every point counts.

A moment that wasn’t so much ugly as scary was when Kyle Weatherman’s No. 47 Chevrolet was stalled off the exit of the esses. He started to climb out of his car while the track was still green. As his car sat idle on one of the fastest portions of the circuit, images of what could happen flashed through the minds of those watching. Weatherman exited his car and climbed over the Armco barriers as quickly as he could. Thankfully, nothing terrible happened, but for a few moments I held my breath, and I’m sure I wasn’t the only one.

Very scary situation where I had to get out of the car…. Had a electrical Fire in the car… thank you @XfinityRacing and @WGI for the Safety and responding fast!

In just his fifth overall start, Sam Mayer made his first career NASCAR Xfinity Series start on a road course, and he brought his No. 8 JR Motorsports Chevrolet home in eighth. His race included a rebound from a penalty for his pit crew being over the wall too soon during a caution, and he subsequently restarted outside the top 30.

It was a poor day for NASCAR Cup Series regulars. Austin Dillon drove the No. 23 for Our Motorsports and ran inside the top 10 for a bit, but Dillon tweeted post-race that his car suffered a broken track bar, relegating him to a 37th-place finish. Erik Jones was the other Cup driver in the field, driving for Jordan Anderson Racing. He, too, had a solid day going, running inside the top 15. As he approached turn 6, Jones crashed. His car went right, head-on into the barriers, destroying the front of his No. 31 Chevrolet. Jones tweeted that he lost his brakes. He finished 36th after what looked to be another promising day for the young team.

“No, I needed him (Gibbs) to lose about three more spots.” – A.J. Allmendinger

It was great to be back at Watkins Glen after a hiatus in 2020 due to the COVID-19 pandemic. It’s truly a unique road course that is impossible to compare to any other one on a NASCAR schedule. Despite his age, Ty Gibbs continues to impress and drive beyond his years. With Allmendinger returning to Kaulig Racing in 2022 for another attempt at the Xfinity Series title, his and Gibbs’s battles on the track are unquestionably a prelude to 2022. Chris Gayle has done a masterful job as crew chief of the No. 54 Joe Gibbs Racing Toyota this season with various drivers behind the wheel, but something between him and the young Gibbs is clicking.

I doubt being the crew chief for the “all-star” car at JGR is something special. Despite Gibbs not being named a full-time driver in the Xfinity Series next season, I would be shocked to find out that Gayle isn’t on the shortlist of potential crew chiefs for Gibbs’ first full-time season in the Xfinity Series. I would be even more shocked to learn he would have zero interest in being Gibb’s crew chief. There would be more pressure attached, but Gibbs could be Gayle’s ticket back to becoming a crew chief in the NASCAR Cup Series. If the pair click, don’t make them split.

For a second week straight, right turns will accompany left turns for the Xfinity field as they travel the Indianapolis Motor Speedway. The Pennzoil 150 on the 2.439-mile Indianapolis road course is on Saturday, Aug. 14, with the green flag scheduled at 4:00 p.m. ET on NBCSN and the IMS Radio Network. Races at Michigan (Saturday, Aug. 21) and Daytona (Friday, Aug. 27) close the month of August for the NASCAR Xfinity Series. After Daytona, only races at Darlington, Richmond, and Bristol remain before the playoffs.

Larry D
Reply to  Get Real

Yeah there is something mighty fishy about his race car.

Agree. For the first time I was truly impressed.

Young Gibbs is in great equipment no doubt but the talent is undeniable.

Last edited 1 year ago by TiminPayson
2
0