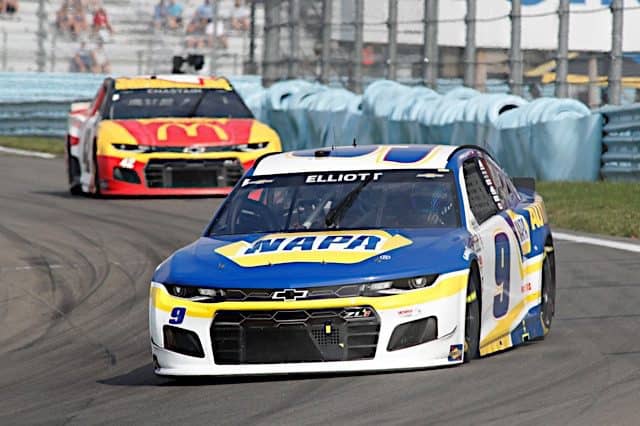 Everybody loves a good come-from-behind victory, but is it still entertaining when the heroic comeback doesn’t quite complete the job at the end of the day?

Based on what we saw from Chase Elliott Sunday (Aug. 8), the answer is yes. Given that the defending NASCAR Cup Series champion had won the previous two races at Watkins Glen International, he could be forgiven for being a little disappointed by “only” finishing second. He sure sounded that way after the race, blaming himself for a mistake that forced an unscheduled pit stop for his No. 9 Hendrick Motorsports Chevrolet during the second stage.

But he also sold himself short, because his team made the first error, failing pre-race inspection and causing Elliott to start from the rear of the field — and without crew chief Alan Gustafson, who was ejected as a result. Even with the deck stacked against him, Elliott made a thrilling charge through the field during the final stage, adding some drama to what otherwise could have been a Sunday drive to victory lane for teammate Kyle Larson.

Unfortunately, it appeared that Elliott used up too much of his stuff while rocketing to second, and that Larson had enough left in reserve to lay down faster lap times when needed. The fact that he had to, though, is a testament to how fun it was to watch the No. 9 car dice through the rest of the competition.

For everyone not named Larson or Elliott, it’s a good thing there are just two more road course races left this season: one next week in Indianapolis, and the other a playoff race at the Charlotte ROVAL. Hendrick has been dominant this year overall, but its two top guns are especially scary on tracks with both left and right turns, and as this weekend proved, that’s true even when they start far from the front.

2. The best (and really only) playoff race is between two teammates

Barring another first-time 2021 winner over the next three weeks, the Cup Series playoff field is basically set. The 13 race winners are all in. Denny Hamlin, despite his lack of victories, has been so consistent overall that he somehow remains tied for the points lead with Larson and his five wins, and is as safe as any non-winner in the Chase/Playoffs era. Kevin Harvick is likewise in fantastic shape.

That leaves one spot, the 16th and final one, up for grabs, and the battle for it is between Richard Childress Racing teammates Tyler Reddick and Austin Dillon. It’s intriguing for a couple reasons; youth vs. experience is a big one, with Reddick only in his second Cup Series campaign and Dillon his eighth. While Reddick is still hunting for his first Cup Series win, Dillon generally manages to pull off one per season. He hasn’t in 2021, which is why he’s in the position he currently faces.

After Watkins Glen, that position is underdog. Dillon trails Reddick by 15 points, which isn’t a ton (indeed, it can be made up in just one race) but isn’t as simple as just finishing ahead of the other RCR car either. Stage points, strategy and luck could all be big factors over the rest of August.

And while neither driver has said as much, one gets the feeling that they wouldn’t hesitate to put the bumper to each other at Daytona if it meant making the postseason. With a regular season finale at a superspeedway likely to add its usual dose of unpredictability to the proceedings on top of this tension, it should be exciting to see if it comes down to the last few laps for that 16th spot.

3. Will the Indy road course be an improvement over the Brickyard 400?

A number of defunct NASCAR Cup Series races are remembered fondly. The Brickyard 400, by and large, isn’t one of them.

The desire for NASCAR to stage an event at the most famous venue in North American motorsports was understandable before it first came to be in 1994, but if you ask most fans, the next 27 years proved mostly that stock cars just weren’t meant for that particular layout. That’s not even counting the 2008 Brickyard 400, where rampant tire issues resulted in arguably the most embarrassing Cup Series race of this century.

The question now is whether the road course is going to be an automatic improvement or if this weekend will turn into a “careful what you wish for” deal. Seven road course races, including one the previous week, means they are no longer a change of pace and need to be compelling in their own right. Some newly added road course contests have been fine this year, others (sorry COTA) not so much.

The only hint we have about the Indy road course is the Xfinity Series race held there last year, which ended with an exciting, multi-car battle for the win. That doesn’t necessarily mean the Cup cars will put on the same type of show, but it’s at least promising, and there only needs to be incremental improvement for many to bid the Indianapolis oval adieu forever, historic or not.

NASCAR Silly Season may not be fun for all the drivers and teams involved, but it usually is for fans with a mix of logical rumors that turn out to be true and a few surprises. This year? It’s been almost entirely the former so far. Things like Brad Keselowski joining Roush Fenway Racing as an owner-driver were floated well in advance and played out exactly as predicted.

One of the few things no one probably saw coming was Trackhouse Racing, before it even had one full season under its belt, buying out Chip Ganassi Racing and revealing a two-car operation for 2022. That meant only one of CGR’s current drivers (at most) would still have a ride, and Trackhouse announced on Aug. 3 that would be Ross Chastain.

But even that has led to a move that everyone now expects: Kurt Busch joining 23XI Racing as a veteran teammate to Bubba Wallace. Heck, that was rumored even before anyone knew what was happening with CGR, so now it’s reached the point where it will be a surprise if it doesn’t happen.

Assuming the finances all work out, it still appears to make sense for all involved. It’s just not very dramatic, which for whatever reason has been the norm so far during this particular Silly Season.

There’s often an interesting split between what hardcore and casual fans want from certain sports. Yours truly got a start in writing about sports by covering boxing, where people who tuned in only for big bouts wanted to see knockouts and would often be disappointed by anything else, while boxing enthusiasts appreciated more of the subtleties of the sweet science and weren’t upset by more tactical bouts.

That split came to mind immediately when watching the first ever Music City Grand Prix this weekend. Longtime racing fans and much of the media was aghast at the ridiculously narrow layout and numerous wrecks. On one hand, it’s easy to see why IndyCar would not want such an unusually big spotlight on a race that featured so many torn up machines and tons of cautions.

But as a spectacle? It’s hard to argue against the idea that Nashville delivered. There was a huge crowd on hand, not just for the race but all weekend, a stark contrast to the sight of empty stands we’ve grown accustomed to seeing across big racetracks in the U.S. for the last decade or two. NBC pushed the heck out of it, almost seeming like it wanted the NASCAR race to be finished so it could head off to IndyCar. The visuals were also incredible, even if the thought of driving over that bridge at nearly 200 mph isn’t my idea of a good time.

And yes, there were a lot of wrecks, and much chatter about how “that’s not real racing.” So be it. People were talking — a lot — about IndyCar this weekend, perhaps more than at any time so far this year. That’s a PR victory, and those count in racing too.

The drivers are (mostly) bemoaning the fact that by moving to the road course, that they have lost a major event. If it ever really was a major event, it was because of the location, not the racing. I’ve seen them all, & I’ve yet to see an even decent one. One was a wreck fest, but that doesn’t make it a good race, at least for me. I was of the opinion in a blog that I was doing 6 or 7 years ago that they needed to be racing on the road course, as well as that they needed to make California a dirt track. If the Indy road course was good enough for F1, it should be good enough for NASCAR. In the old days, there were only a hand full of really competent road course drivers in Cup. It’s really refreshing to see so many mastering it now. There are enough good road tracks around & it’s refreshing to see them visiting some different ones. Thanks to NASCAR for refreshing a very stale rotation this year.

I, at least, have never thought of the Brickyard 400 a s a crown jewel race. Other than the first two years, which were spectacles, the races have been outright boring. And the endless yammering of broadcasters about the history, the legacy the blah blah blah of Indy has always been extremely annoying. That history and legacy is true and richly deserved, but comes from open wheel racing and has absolutely nothing to do with NASCAR. it’s like visitng the Lincoln Memorial and taking credit for the Emancipation Proclamation.