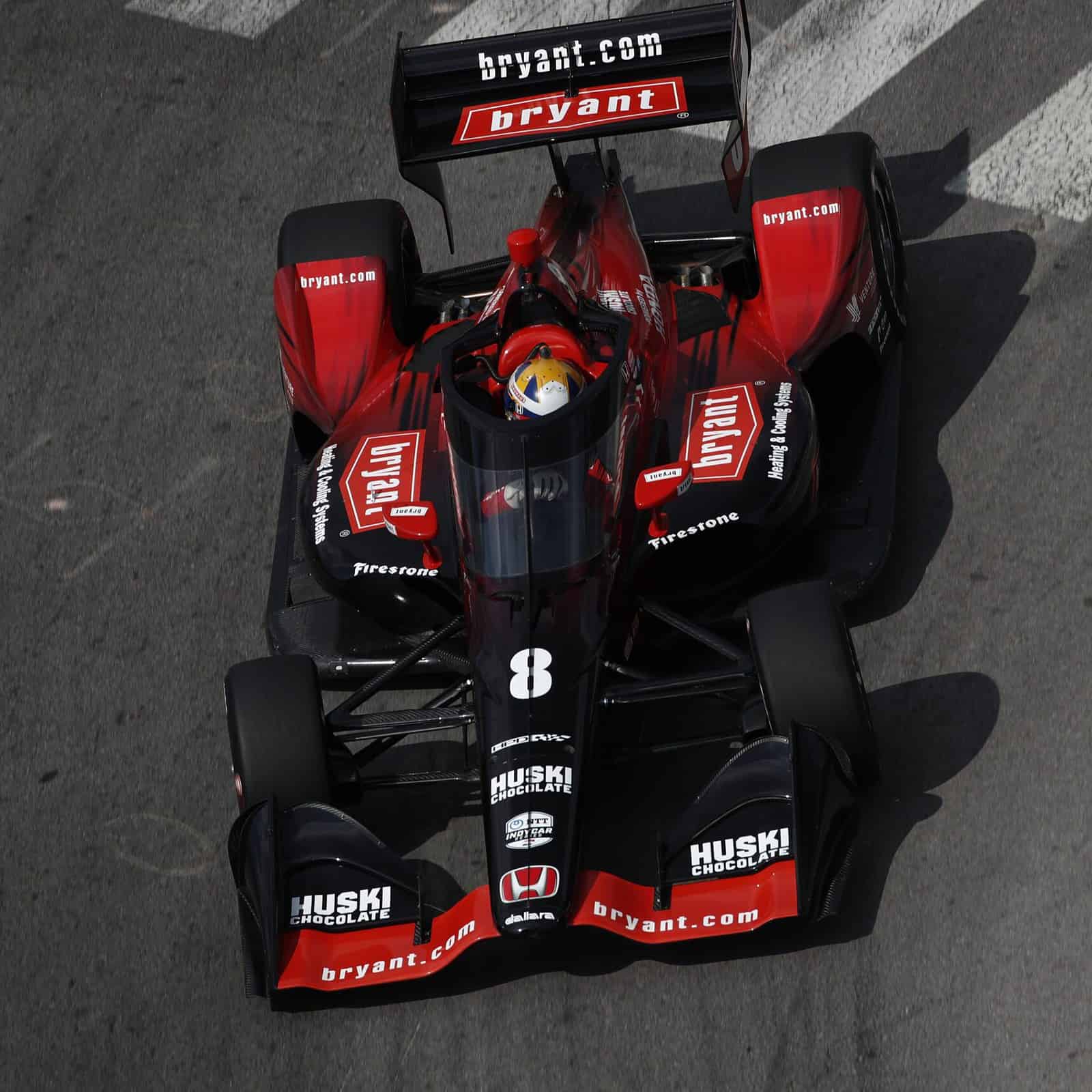 “There was a man, and he was flying!”

The 80-lap race quickly went under a full course yellow after Dalton Kellett’s car stopped with steering wheel issues, Kellett reportedly telling his A. J. Foyt Racing mechanics over the radio that the steering wheel came off.

When the race resumed on lap 5, Ericsson ran into the back of the other A. J. Foyt Racing entry of Sebastien Bourdais, the No. 14 Chevrolet retiring from the race with crash damage while the nose of Ericsson’s No. 8 Chip Ganassi Racing Honda saw more air time than a skateboard at the X Games.

Ericsson’s front wing was partially detached and at one time had partially wedged itself underneath Ericsson’s right front tire as the Swedish driver perilously navigated the 2.17 mile street circuit, shedding carbon fiber debris along the way.

When Ericsson made it back to the pits, the Ganassi crew replaced the nose, refueled the car and replaced the Firestone black sidewall primary tires with the red sidewall alternate tires. Despite the crew changing the front wing, the car wasn’t exactly perfect after the collision.

“After I got the damage on the front wing, when I tried to make my way back to the pits, at one point the front wing got underneath the front tires and I went into the wall at turn six and kind of bent the right front. I thought I had to stop. Somehow the wing came to the front again and I got steering and I could continue.”

Ericsson then became the benefactor of some good fortune. On the lap 19 restart following a caution period, Will Power was passing his Team Penske teammate Simon Pagenaud going to turn 11. The duo had contact, sending Pagenaud nose-first into the tire barrier at turn 11.

With Rinus VeeKay and Takuma Sato stopped behind Pagenaud and Cody Ware tapping Jimmie Johnson from behind causing Johnson to get sideways, the track was blocked, necessitating a red flag to clear the track. Ericsson barely squeezed between Johnson and the inside wall while having light contact with Kellett ahead.

In that melee, Ericsson gained five positions as the race was red flagged, and as the race resumed, Ericsson was running in 10th after Ed Jones served a drive-thru penalty for avoidable contact with Scott McLaughlin that created the caution prior to the track blockage.

Remember that pit stop to change the front wing and tires earlier on Ericsson’s car from the contact with Bourdais? That came in handy a bit later as the race had another full course yellow for VeeKay’s stopped car after an eight lap green flag run. Many leaders hadn’t made their first pit stops of the race, and when they all pitted, that gave the lead to Ericsson.

There were 15 laps of caution from the time Ericsson made his first pit stop until the halfway point of the race. At the rate the race was going, Ericsson would only need one more pit stop to finish the race on fuel if Ericsson was able to conserve enough fuel.

Ericsson would make that final pit stop on lap 45 under an extended full course yellow caused by the stopped cars of McLaughlin and Kellett. McLaughlin had spun after contact from Power, and Kellett tried to squeeze between the No. 3 Team Penske Chevrolet and the outside wall, but there was not enough room, eliminating both cars instantly.

Ericsson fell to eighth position but would soon rise to second as the cars that pitted to give Ericsson the lead earlier would stop again on lap 52 under the full course yellow for Pato O’Ward’s stalled car at turn 4.

Romain Grosjean was leading now but would pit four laps later, giving Ericsson a lead he would not relinquish.

However, the menacing Colton Herta was soon in Ericsson’s mirrors. Herta had the fastest car all weekend long, securing pole position by an astounding .5492 seconds over Scott Dixon and stretched the No. 26 Andretti Autosport Honda to its maximum capabilities, going from sixth on lap 57 to second just five laps later.

The gap remained under a second for many laps, with Herta questioning how Ericsson was able to stay in front despite having older tires that in theory would be providing less grip as the race went on and less fuel to finish the race.

“I think when Colton was behind me and I had to do a really big fuel number to get us to the finish line and still keep him behind, that was one of the toughest challenges of my career,” Ericsson said in the post-race press conference. “I’m very proud that I could keep him behind and keep the pace up. That won me the race.

“He was pushing really hard, as we could see. He’s been the fastest guy all weekend.”

Ericsson kept his car in front, still saving as much fuel as possible. Herta tried on lap 69 but locked up his brakes, losing almost two seconds to Ericsson. While clawing that gap down, Herta locked up again, but this time his car slid into the wall, knocking the Californian out of the race.

Ericsson led Dixon, who had 50 laps on his tires following a decision by Dixon’s No. 9 Chip Ganassi Racing crew to not change tires at his final pit stop. The 2008 Indianapolis 500 winner was no match for Ericsson as the race went green for the final two laps, as Ericsson no longer needed to conserve fuel thanks to the three laps under caution.

The second IndyCar win of Ericsson’s career marks the first year Ericsson has scored multiple wins in a racing season since 2009, when Ericsson won two races in British Formula 3 and five races in the Japanese Formula 3 championship en route to winning that championship.

“To be fighting up front, to be winning races on this level, it’s amazing,” Ericsson said in the post-race press conference. “To finally show after all the tough years in F1, being a back marker in small teams, people thinking you’re not good enough, so on, to be able to come here and show what I can do, just show that I can deliver, show that I can win races, run up front, it means a lot to me.

“It’s been a long time, a lot of tough days to get me here. So I’m really enjoying this year so far to finally show what I can do.”

The next race is the Big Machine Spiked Coolers Grand Prix at the Indianapolis Motor Speedway road course on Saturday, August 14th at 12:30 p.m. ET. The race will air on NBC Sports Network.