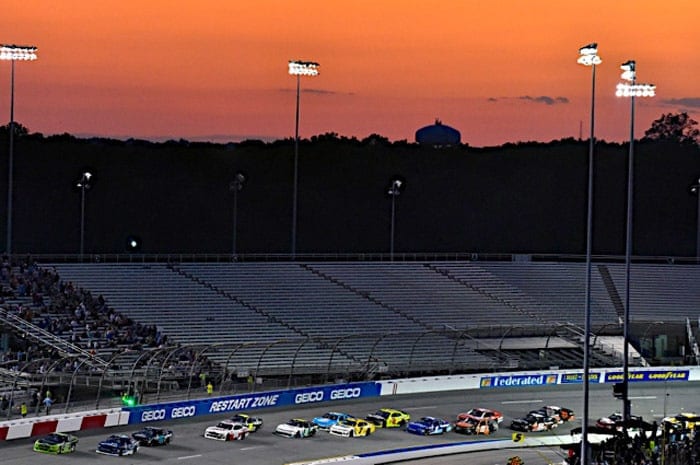 The original plan for this week’s column was to talk about NBCSN’s broadcast of Sunday’s Go Bowling at the Glen, and reflect on how the MVP coverage worked. I would have talked about how Mike Bagley integrated himself into the telecast from his post in the Esses. Maybe I would have touched upon yesterday’s INDYCAR race in Nashville. One thing is clear from all that. If NASCAR, INDYCAR and what will probably be the USA Network plan to do this Watkins Glen-Nashville doubleheader again next year, then they need to start the Glen earlier. There is no reason that the INDYCAR race should have run up against darkness under sunny skies.

Of course, as you probably know by now, we got word on Monday that Bob Jenkins passed away from brain cancer at the age of 73. It is a terrible loss for all of motorsports.

When I heard the news of this, I immediately thought back to when Steve Byrnes died back in 2015. Late in Sunday’s broadcast of the Big Machine Music City Grand Prix, play-by-play commentator Kevin Lee made note of Jenkins on the broadcast and how he was going through a tough time. To me, it was the equivalent of what FOX Sports 1 did during the 2015 Food City 500 in Support of Steve Byrnes and Stand Up to Cancer when they ran a montage of crewmembers yelling “Byrnes Strong,” although not as showy. I would link to that, but the version of the race that NASCAR has on YouTube doesn’t show the montage (it does have audio, though).

A couple of days later, Byrnes died as a result of his cancer. However, we do know that he watched the whole race at his home (which took a while since there was a long rain delay) and was touched by the tribute.

Long story short, when you hear something like Lee’s statement during Sunday’s race, you sit up and take notice. I’m far from the most connected writer out there, but a lot of the commentators on TV are fairly well-connected. If something like that is said, often times, something is up. Sadly, it was.

We knew that Jenkins was in the midst of a cancer battle. Jenkins wasn’t really active on social media like Byrnes was, so you never heard much from him when he wasn’t at the track. Much of the racing community found out about Jenkins’ cancer diagnosis after J. Douglas Boles did an interview with him for the Indianapolis Motor Speedway’s YouTube channel in February.

From then on, you didn’t really see him much. He did make the trip to the Indianapolis Motor Speedway back in May and made it onto some of NBC Sports’ coverage from the track. He also did a couple of interviews during the month. For instance, this interview with Indianapolis’ NBC affiliate, WTHR Channel 13.

At that point, it had been roughly five months since he had been diagnosed with cancer, and his health had already declined significantly. The sad truth of the matter is that Jenkins’ death was not unexpected. It is very difficult to come back from brain cancer. My grandmother died of cancer that ultimately spread to her brain in 1998. Once it got there, it was not long before she was gone.

For many of us at Frontstretch, much of our early fandom in motorsports came with Jenkins on the broadcast.

The 1988 Bud at the Glen at Watkins Glen was the first race of any kind that I ever recall watching on television. Jenkins was on the call for that race alongside Ned Jarrett. Benny Parsons was in his final year as a full-time driver in the then-Winston Cup Series and didn’t join the booth full-time until the middle of 1989 after a botched experiment with Gary Nelson.

If you want a look into Jenkins’ pre-ESPN days, I highly recommend the Dinner with Racers podcast episode with Jenkins that was released last year. There are a lot of interesting things in there, like how he got involved with the ragtag, fledging cable channel we know as ESPN today less than a year after the channel went live, and his love of old records.

Especially early on, Jenkins’ work at ESPN was a little more akin to what you’d see today at NBC Sports of someone like Leigh Diffey. While he was best known for covering NASCAR, he also called INDYCAR races, IMSA events and the Thunder broadcasts from various short tracks. He was effectively the face of ESPN SpeedWorld for 20 years.

Of the various forms of motorsports he covered for ESPN, Jenkins was probably the least versed in sports car racing. He did work a couple of notable events, though. One example is the 1986 Los Angeles Grand Prix Six-Hour Endurance at Riverside International Raceway. This race is best known for a nasty crash involving Doc Bundy, Chip Robinson and Lyn St. James in turn 1.

He was ESPN’s play-by-play guy when ESPN was the primary place for Winston Cup races. For instance, ESPN aired 20 of 29 Cup point races in 1990. Jenkins was on play-by-play for effectively all of these races.

In NASCAR, there are almost too many notable moments to think about when it comes to Jenkins. The infamous contact at North Wilkesboro on the final lap in 1989 between Dale Earnhardt and Ricky Rudd is one example. Calling Alan Kulwicki to his title in 1992 is another. A personal favorite is the 1997 Kragen 151 for the Craftsman Truck Series at then-Sears Point (now Sonoma) Raceway, when Dave Rezendes crashed out of the lead with four laps to go just after Rich Bickle got intentionally shoved off the road.

Bickle ran afoul of Boris Said that day. He ticked off the man with the afro and paid the price.

Intentional contact aside, having an on-air gig for 20 years nearly non-stop (there were a couple of early ESPN Cup races that did not feature Jenkins; Mike Joy was on one of those) means that you become like an old friend to viewers. In my case, Jenkins was effectively one of the main voices of my childhood on TV, not dissimilar to characters on shows like The Simpsons, or Looney Tunes characters since Nickelodeon aired them back then, or even like local news anchors. He was in the booth for Cup races from when I discovered NASCAR as a four-year old to when I was 16.

Beyond that, he did IRL races on ESPN and ABC for a couple of years, then had a short stint with Champ Car when they aired races on Spike TV (that didn’t work out well for anyone). Finally, he called races for Versus and later NBCSN before retiring at the end of 2012 to tend to his wife, Pam, who was suffering from brain cancer at the time.

In addition, Jenkins lent his voice to some of EA Sports’ earliest NASCAR games for the Sony PlayStation and the Nintendo 64. For NASCAR 98, EA Sports shot some live action videos with Jenkins that would introduce the individual tracks.

Jenkins did in-race commentary for NASCAR 99 and NASCAR 2000. I still have copies of both of those games here at my house. I was a big fan of NASCAR 2000 since they had a diverse driver lineup in there. I fully admit to racing a bunch as Kevin Lepage in that game.

Jenkins had a voice role in Days of Thunder (you can hear him give the command to start engines at Daytona at the beginning of the movie. He also had an on-camera role in Talladega Nights: The Ballad of Ricky Bobby as the host of the short-lived SPEED News (which he hosted in real life at the time).

To most race fans, Jenkins will be remembered as the anchor of the legendary ESPN booth trio of Jenkins, Ned Jarrett and Benny Parsons. At 41, Jenkins was the youngest of the trio when they first started working together in 1989 (Parsons was 48, while Jarrett was 56). Jarrett is now the only one of the three left at age 88.

The trio called Cup races together for 11 years and had lots of fun doing so. They spent plenty of time together away from the track as well. Jenkins and Parsons often ate meals together when on the road (Jarrett was a little more family oriented and ate with his wife, plus he had his Busch responsibilities). I’m not sure if they did retreats together like what Rick Allen has instituted with his NASCAR on NBC colleagues, but it was clear that the three of them were in tune with each other.

I doubt that Jenkins ever really made a comment about this, but this particular booth trio probably did quite a bit to draw fans into the sport as it began to boom in the 1990s. Yes, on ESPN, he wasn’t necessarily the most visible play-by-play man in the sport at the time (that probably would have been Ken Squier at CBS and TBS), but race fans (and fans of other sports) were likely well aware of his work at the time.

I’m not going to say that I would have “marked out,” to use some wrestling parlance, if I met Jenkins. I’d just be excited to ask him a bunch of questions. As I’ve grown older, I’ve become much more inquisitive. I want to learn as much as I can, and even though Jenkins himself described his own career as “I was just a race fan who got lucky,” I’d want to ask him about his work ethic, what he would need to be bring to the table with Jarrett and Parsons, and so on.

Jenkins will likely be remembered as someone who had an incredibly cool job covering something of his favorite things, and having boatloads of fun doing it with people he considered dear friends. Even though he apparently stumbled into the gig, he was very good at what he did. The sport is going to be a little poorer without Jenkins around.

With Monday’s news, there will be no critique tonight. Later this week, I will cover the action from Watkins Glen in the Frontstretch Newsletter, or here at Frontstretch in some form. It hasn’t been decided yet.

For this upcoming weekend, it is another tripleheader at the track as the NASCAR Cup Series enters even more uncharted territory. They’ll race on the Indianapolis Motor Speedway’s infield road course for the first time. The Xfinity Series and NTT IndyCar Series will also join up for an excellent weekend of action. TV listings will be at this link.

I will provide critiques of the Cup and Xfinity races from Indianapolis in next week’s edition of Couch Potato Tuesday here at Frontstretch. If there’s time, I do want to look at the coverage of the TA2 race from Nashville that aired Saturday night on CBS Sports Network as well.

Pour one out for another racing broadcasting pioneers. RIP Bob.

A terrible loss for race fans. Bob was personable, yet always professional, and the epitome of class. I’ll miss him.