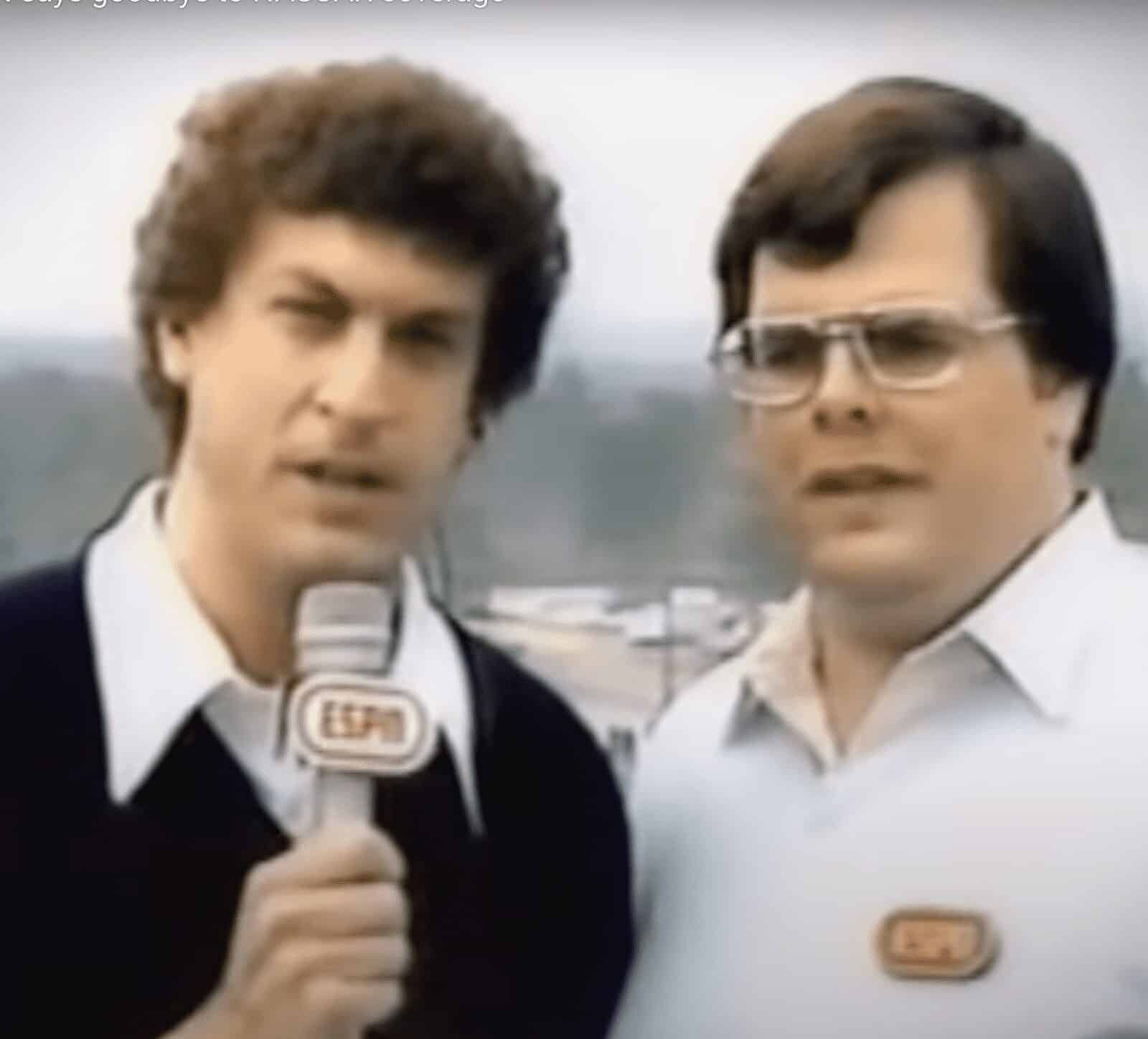 Bob Jenkins during the first ESPN NASCAR broadcast in 1981 (YouTube).

As I drove home Monday evening, I listened to SiriusXM NASCAR Radio. At one point, the channel returned from commercial.

Instead of a normal show bumper, it played audio from a 29-year-old radio broadcast of a race that made me misty-eyed.

It wasn’t just any race broadcast.

“The checkered flag is out! Goodyear makes a move! Little Al wins by just a few tenths of a second!”

It was the finish of the 1992 Indianapolis 500. The exuberant voice belonged to Bob Jenkins, who died Monday at 73 from brain cancer.

That’s a result of having watched my copy of the 1993 VHS tape “The Indianapolis 500: Race to Glory” an untold amount of times as a kid.

The tape, which I dug up once I got home and then found on YouTube, recounts the race’s history and ends with the historic finish between Al Unser Jr. and Scott Goodyear.

Something I didn’t realize until I was an adult was Jenkins’ call wasn’t for the ABC broadcast of the race, but the IMS Radio broadcast.

In hindsight, it’s sort of strange that my earliest memory connected to Jenkins and auto racing wasn’t from a NASCAR broadcast on ESPN, but an IndyCar radio call on a VHS.

Regardless, it helped cement Jenkins’ as forever being the voice I associate with NASCAR and auto racing.

He didn’t come from central casting, he wasn’t a former racer himself and he never came off as a gearhead.

That everyman quality, at least for me, is part of what made him endearing.

As an Indiana native, IndyCar was his first love. But he was right at home calling NASCAR races, which he did for ESPN/ABC starting in 1981 at Rockingham up until the 2000 season finale at Atlanta.

Jenkins was a professional.

He never pandered, he informed. He only raised his voice when there was something legitimately exciting to warrant it.

One of my strongest memories of Jenkins is watching ABC’s broadcast of Dale Earnhardt’s photo finish win over Bobby Labonte in the spring race at Atlanta in 2000. While Dr. Jerry Punch was on the call for Earnhardt’s incredible final win later that year at Talladega, Jenkins was the man behind the mic for his 75th Cup Series win.

Jenkins was seemingly everywhere in the 1990s.

If there was a media project connected to NASCAR then, chances are you’d see Jenkins pop up.

You can hear his voice frequently in 1990’s Days of Thunder, announcing the exploits of Cole Trickle.

As a kid with a PlayStation, firing up EA Sports’ NASCAR 98 or its sequels meant you got a Bob Jenkins introduction before every race.

For Millennials and Gen Xer’s of a certain age, Jenkins was literally the host of NASCAR at almost every real and digital turn.

There's countless amounts of memories that I have. The one that sticks out the most though was me rewinding my VHS tape over and over again as a kid listening to him call Jeff Gordon to the Winston Million in a battle with Jeff Burton at the '97 Southern 500. https://t.co/6EPTJ7shgJ

He was the voice of NASCAR 2000, and I played that game until it stopped reading the disc. He called many of my victories with BP as I drove Adam Petty’s car to victory, not knowing what happened Adam as a child. I just really liked the Spree car.

There so many great, iconic memories! The first race I remember watching flag to flag was the 92 Hooters 500 and his call of Kulwicki's championship. Or his memorable call of Rusty's 93 'Dega flip. Or the iconic 92 INDY 500 Call I first remember from a Valvoline commercial!

I don't want to repeat what will be a common one, so Instead, I'm going with the 1995 Goody's 500 finish and Labonte's wreck.

Also, it was his ESPN tribute to Dale Earnhardt in 2001 that taught me my #1 favourite quote ever.

Right now, the only member of the NASCAR Hall of Fame who is enshrined exclusively due to their contributions through TV and radio is Ken Squire, who is absolutely deserving.

Squier helped form the Motor Racing Network while influencing the deal that resulted in CBS airing the Daytona 500 live flag-to-flag starting in 1979.

While Squier was the lead announcer for NASCAR’s biggest races — Daytona 500, Charlotte, Michigan and Pocono — from then until the late 90s, Jenkins had him beat in sheer numbers.

“I firmly believe we contributed (to NASCAR’s popularity boom),” Jenkins told Michael Waltrip last year. “But the main thing that made NASCAR grow at that time was simply the fact that we were able to expose to the rest of the United States, as opposed to sections of the southeast … how good it is and how good the drivers are.”

The NASCAR of the boom era wouldn’t have been the same without Jenkins as it primary narrator. Hopefully that is recognized by the Hall sooner rather than later.

My Afternoon with Bob

In 2014, I was just about to start my professional career in sports journalism.

As part of an independent study course, I took it upon myself to produce an oral history of the race that first introduced me to Bob Jenkins, a fellow Indiana graduate.

So of course, I had to talk to the man himself.

We met one day at the IMS Museum in April or early May, weeks before I’d cover my first Indy 500, which would result in its own incredible photo finish, this time with Jenkins as the track’s PA announcer.

For at least an hour, I sat with my favorite sportscaster ever on a bench in the museum. He told me the story of how he got into broadcasting and tales from the Month of May in 1992.

“Little Al, and I keep calling him that and if there’s one thing I regret about the call I made in 1992, is that I called him Little Al,” Jenkins lamented. “I wish I would have called him Al Unser Jr. He was old enough not to be called Little Al.”

In the wake of the 1992 race, Jenkins at one point got tired of his own voice.

“The call was used in a Valvoline commercial,” Jenkins remembered. “It ran for every motorsports event during the entire summer, NASCAR or IndyCar, whatever. Valvoline ran that commercial with my call to the point where I got just so sick of hearing it until I got the (royalty) check … and it was worth it all.”

A quarter of a century later, words spoken by Unser after his victory still stuck with Jenkins.

“I think the most important and meaningful words that has ever been spoken by a winner occurred in victory lane when Little Al said, with a cry in his voice, ‘You just don’t know what Indy means,'” Jenkins said. “I think that sums up the feeling of a lot of drivers, but it also sums up the feeling of a lot of us who have fortunately been able to contribute to a lot that goes on here during the Month of May. But those were words that as far as I’m concerned was the greatest quote ever in victory lane. ‘You just don’t know what it means.'”

I hope Jenkins knew what he meant to so many people.

Below is his final NASCAR signoff from the 2000 finale at Atlanta Motor Speedway.

was so sad to read of his passing. he and bp and ned were the great nascar announcers.

“Below is his final NASCAR signoff from the 2000 finale at Atlanta Motor Speedway.”

Here’s one tribute to Bob Jenkins…

What did you think about the finishes at Michigan before the useless CoT and its iterations?

Made me remember why I liked Nascar in the first place. Fuggin Nascar and it’s innovations. I really believe we start seeing IROC again next year. Pray I’m wrong.

Nobody complained about the Michigan track or any other track when NA$CAR had real race cars.

Listened to Bob for 20 years on NASCAR and other broadcasts. A true pro. Could instantly recall his voice when I first heard the news. So enjoyable. Especially after listening to Jr. and Burton screeching through the Watkins Glen broadcast Sunday. Truly missed.

GOAT, not even close. Made racing interesting and enjoyable without dumbing it down and pretending to be out of work comic. He made you want to go to races, and if you couldn’t, you would still plan your Sunday in front of the SMALL TV.