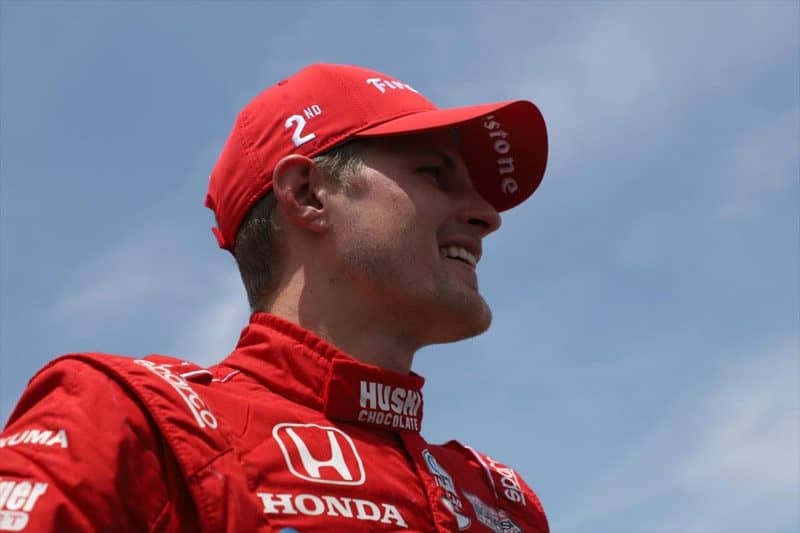 Marcus Ericsson led teammate Scott Dixon to the checkered flag in the inaugural Music City Grand Prix in Nashville, Tenn. on Sunday (Aug. 8th). Ericsson led the final quarter of the race without error to secure the second win of his career, firmly placing himself in the championship discussion as IndyCar’s season approaches its final stages.

Colton Herta, who had dominated the majority of the race up to the three-quarter mark, put his Andretti Autosport Honda in the wall with five laps to go, ending his race and a challenge for victory. The resulting concerns regarding the turn 9 wall and tire barrier resulted in a brief red flag, with darkness looming.

Though the race’s final 20 laps provided some much needed green flag running, the race was dominated by cautions, with nine yellow flags and two red flags flying through the total 80 laps.

Most spectacular was – during an early restart – Ericsson climbing over the rear end of Sebastien Bourdais’ A.J. Foyt Racing machine, sending the Swedish driver airborne and destroying his front wing in the process. Bourdais was left to retire due to the resulting damage.

While Ericsson was penalized for the incident, the number of cautions throughout the race meant that Ericsson had ample time to work his way back to the front and challenge for the win.

“In IndyCar, anything can happen,” Ericcson exclaimed after the race. “You can never give up!” He went on to describe the comeback from early contact with Bourdais, then holding off both Herta and Dixon as “one of the best performances of [his] career.”

Others didn’t find themselves so lucky. Both Dalton Kellett and Scott McLaughlin found themselves involved in multiple caution-spawning incidents, including McLaughlin spinning from contact with his teammate Will Power on lap 41.

To further complicate things, water began leaking from the turn 3 tire barrier during the lap 41 caution period, which interfered with the direction of Oriol Servia’s safety car. This issue led to confusion regarding the lineup for the restart when Herta and Servia both passed pit exit at the same time. Herta was ultimately relegated to restart in fourth position.

The NTT IndyCar Series returns Saturday (Aug. 14) for the Harvest Grand Prix on the Indianapolis Motor Speedway Road Course. The race will be held as part of a larger doubleheader weekend with NASCAR’s Xfinity and Cup series. Television coverage will begin on NBCSN at 12:30 p.m. ET.

This course was absolutely brutal! Too bad Herta crashed, he ran a helluva race and it was shaping up to be a great finish; Could Ericsson stretch the fuel while keeping Herta at bay, or if Herta could mount a final charge to take the lead!

Mistakes from O’ward (resulting in penalties from the race stewards) handed Dixon 2nd place in the points standings. He may come to regret that down the stretch…

Great to see Hinch and Hunter-Reay with a good finish. Seems it’s been a long time for those 2.

This race showed how hard and dangerous an Indy Car event is. All that vibration, speed and close walls. It takes a lot of talent.
Is Jimmie Johnson the new Milka Duno of Indy Car racing?

Jeremy
Reply to  Tom B

I think crossing disciplines in the modern age is more difficult than most imagine. Recall Dario Francitti’s forgettable foray into NASCAR, and he is a 4 time Indycar Champion! Tony Stewart and Juan Pablo Montoya are the only 2 who had any kind of sustained success in both, and Tony Stewart’s IRL Championship was not won against the same level of talent that is in the series today, and IIRC that series was run on ovals, a discipline which Stewart was familiar with. I’m certain he would not have done nearly as well in the CART series.

I never was a big JJ fan in NASCAR, but I do think it’s interesting the learning curve he is highlighting between the two disciplines. Admittedly, I thought he’d be a bit better than the results he has posted. Never delusional enough to think he’d be a top 10 driver, but I thought he’d have a couple more finishes between 15-20 by now.